Gerhard Schröder labeled ′enemy of the state′ in Ukraine | Europe | News and current affairs from around the continent | DW | 15.11.2018

Gerhard Schröder labeled 'enemy of the state' in Ukraine

Controversial Ukrainian website Myrotvorets has added former German Chancellor Gerhard Schröder to its list of enemies of the state. It’s caused quite a stir — but that seems to be the desired effect. 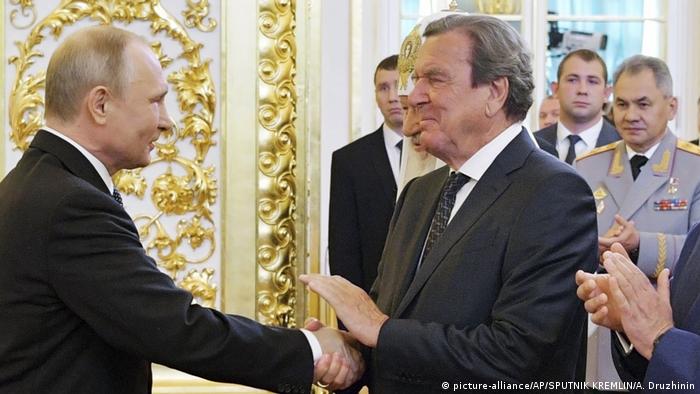 It’s just a few lines, plus a photo and date of birth. But they accuse Gerhard Schröder, the former chancellor of Germany and chairman of the supervisory board of Russian oil company, Rosneft, of "anti-Ukrainian propaganda" and attempting to justify "Russian aggression against Ukraine." A few links to articles in the Russian media are included to serve as proof.

This entry on the controversial Ukrainian website Myrotvorets (Peacemaker) has grabbed the attention of the German media, and sparked a reaction from the Foreign Ministry. In Berlin on Wednesday, a spokeswoman said the ministry "strongly condemned" the list.

"We have informed Ukraine of our position in the past and have insisted the Ukrainian government delete this website," she said.

If the goal was to provoke, the Ukrainian publishers hit their target with minimal effort — and not for the first time. In recent months, Myrotvorets has used famous names to make headlines, mainly in Russia.

Also on the list is Hungary’s Foreign Minister Peter Szijjarto, who has criticized Ukraine for its tough new language laws. The head of the Ukrainian Orthodox Church, Metropolitan Onufry, was listed as an "agent" of the Russian church.

Myrotvorets was founded in the spring of 2014, during the early phase of Russia’s annexation of Crimea and the war in eastern Ukraine. It proclaimed a mission to research crimes against Ukraine’s national security, as well as to protect the "security of humanity" and "international legal order."

Four years later, the website still maintains its amateurish, unclear appearance. The inclusion of contact information for the Ukrainian domestic intelligence agency SBU appears aimed at lending a veneer of respectability. But this impression is countered by the ironic colloquial language. The declared aim is to help Ukrainian security officials, out of patriotic motives.

It’s not clear who exactly is behind Myrotvorets. Initially, it was assumed to be an advisor to the interior minister. The website says it’s the work of an independent, non-governmental organization founded by a group of researchers, journalists and experts. 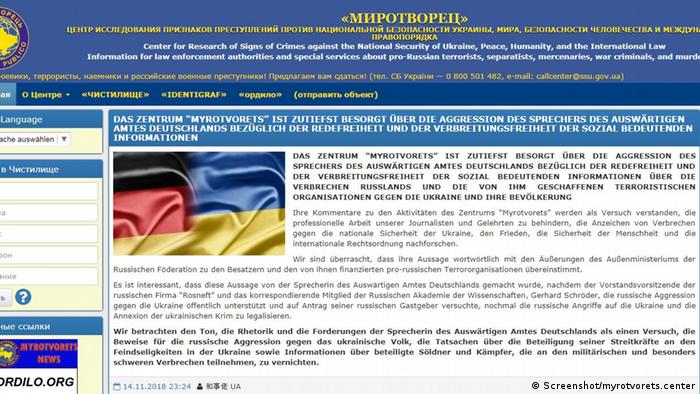 The site more resembles an amateur forum than a professional NGO

In essence, Myrotvorets acts like a public pillory. The site publishes the personal information, names and addresses of people considered to be pro-Russian separatists, their accomplices, or "agents of the Kremlin."

"In the course of the growing polarization in Ukraine, nationalist forces are eager to use the word ‘betrayal.’ But they appear to assume that anyone who is not clearly pro-Ukraine is the enemy," said Susan Stewart, Ukraine expert at the Berlin-based German Institute for International and Security Affairs, in a DW interview.

The site came under heavy criticism in 2016 for certain practices. Back then, Myrotvorets published the data of journalists who travelled to the separatist regions and registered with authorities there. That prompted an outcry from international authorities who said that such information would put journalists in danger. The project was then abandoned, but only temporarily.

According to information from the DW studio in Kyiv, Moscow correspondent Juri Rescheto is still on the list, with a note that he "violated Ukraine’s state border." That likely refers to the time in 2016 when Rescheto flew from Moscow to Crimea for a shoot instead of travelling there via Ukraine, as Kyiv insists is proper.

Recently, Ukrainian Foreign Minister Pavlo Klimkin criticized the site after it published the names of more than 300 members of the Hungarian minority in western Ukraine who’d obtained Hungarian passports. Several civil servants were reportedly among that number.

The incident has been causing tensions between Kyiv and Budapest for months. Klimkin said he opposes stirring anti-Hungarian sentiment. The Ukrainian government has repeatedly criticized the Myrotvorets project, but has allowed it to continue operating. The official word is that Kyiv has no influence, as the website’s server is located outside the country.