Gay parents flee Russia with kids: ′The authorities could take the children away′ | Europe | News and current affairs from around the continent | DW | 12.08.2019

Gay parents flee Russia with kids: 'The authorities could take the children away'

Andrei and Yevgeny are married, with two adopted children. In an exclusive DW interview, they recount how they had to leave Moscow for fear that the Russian authorities would take their children away. 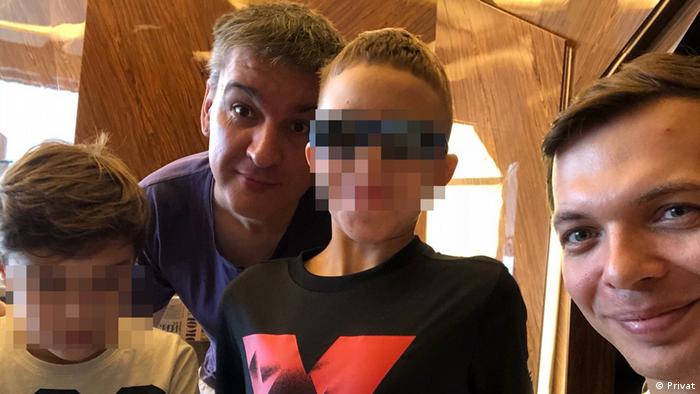 Only a few weeks ago, Andrei Vaganov and Yevgeny Yerofeyev had no problem with the Russian authorities. The couple had married in Denmark and lived with their two adopted sons in Moscow. The problems began when Russian investigators initiated proceedings against representatives of the state agency that had allowed Andrei Vaganov to adopt the two boys. This resulted in the family having to leave their home country. The case has received a lot of media attention in Russia.

DW was able to talk with the couple, but on advice from their lawyers, they do not yet want to disclose their current whereabouts for security reasons.

DW: How did the adoption of your first son, Denis, happen?

Andrei: In Russia, there are not many reasons an adoption application can be rejected. An application can be rejected on the grounds of health problems, such as HIV, cancer and mental illness, or if someone has been convicted of criminal offenses. You have to show proof you have an income at least equal to the subsistence level and have sufficient housing. That is all.

The only problem was getting a so-called confirmation of suitability certificate. An entire commission, consisting of 10 women, was convened for this purpose. They asked me why I wanted to adopt a child and why I was unmarried. It was clear where this was going. So, I asked the President of the Commission directly whether she believed that I would want to have sex with my own son. She said to me that she had not said anything like that. But 10 days later I had the confirmation of suitability certificate. Even now in Russia, the prevailing opinion is that a single man is unsuitable to adopt a child. 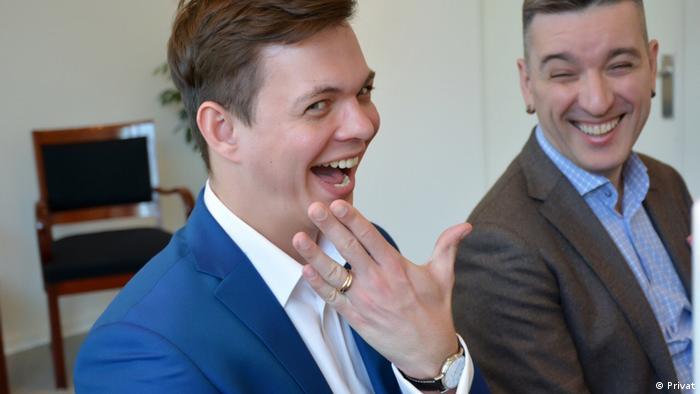 Vaganov and Yerofeyev were married in Denmark in 2016

Was it the same with the second adoption?

Andrei: I went back to the adoption center and went through the formal procedure. I was then told that there was no child I could adopt. But a few hours later I got a call that they had found a boy. That was Yuri.

You then lived as a family in Moscow. When did your lives change?

Andrei: The whole situation in the country worsened. First, there was the Dima Yakovlev law in 2012, the ban on the adoption of Russian children by US citizens. (Editor's note: The law was named after the deceased 2-year-old Russian boy who had been left in a car in blazing sunshine by his American adoptive father. The law was Russia's response to restrictions on the entry into the US of Russians who had been involved in human rights abuses). And then there was the law on homosexual propaganda, which immediately turned us into criminals because of our sexual orientation. Our children then told us that they had been teased, and others called us pederasts.

Did you ask your children to hide the fact that they have two fathers?

Andrei: Never. I also never said that we are a special family. I just said that there are different kinds of families.

Read more: 'I thought my daughter was a monster'

What are the accusations against the representatives of the state agency that allowed you to adopt the two boys?

Andrei: In connection with the "propaganda of non-traditional values," the state representatives are accused of having neglected their duty of supervision. This means that lesbian couples could even have their biological children taken away because, through their lifestyle choices, they propagate "certain values."

Could you say that the Russian government is planning to close any legal loopholes to prevent adoption by same-sex couples?

Andrei: Even now, there is no grey area. The legislation is clear. There is no possibility for gay couples to adopt. This possibility only exists for individuals. Yevgeny has no legal relationship to the children. At the same time, there are many single heterosexual women who adopt children.

Yevgeny: It is rare for a gay couple to raise children in Russia. There are many more lesbian couples who do this. And lesbian couples usually also have biological children.

When did your case come to the attention of the authorities?

Andrei: Yuri is registered with the police for administrative infringements. We adopted him late. When he first fell into the hands of the police, he told them at the station that he lived with two fathers. A few months later Yuri was hospitalized with suspected appendicitis. Yuri told us that the doctor asked him when his mother was going to come and Yuri said that he had two fathers. I got a call from the district office. The investigator said he wanted to talk to me and the child. He sent us for a forensic examination. This is very unpleasant and shocking for a child. Yuri was checked as to whether he was a victim of sexual offenses.

What was the outcome?

Andrei: At the time, we were told that the results would be available in a month. A representative from the adoption center then called and asked us to voluntarily put the children in a rehabilitation center until the results of the examination were available. My lawyer told me, 'Now you have to leave the country.' Less than two hours later, Yuri and I packed our things and left Russia. Shortly afterward we also took Denis out of the country. At this point, criminal investigations were already underway. I was threatened with being put on trial for murder.

Yevgeny: I was alone in Moscow at that time. A week after Andrei and the children had left the country, there was a knock on my door, but nobody called 'police, open up.' After half an hour the violent knocking stopped. My parents' home was searched. They were looking for the children and our Danish marriage certificate because we got married in Denmark in 2016. My friends then got me out of the country.

Andrei, whom are you alleged to have murdered?

Andrei: I am accused of having murdered my children. The public officials said, 'Bring them to us and prove that they are alive.' I refused. Several lawyers have confirmed that the authorities could take the children away from me. They would then be handed over to psychologists. And on the basis of these conversations with the children, the authorities could then, for example, initiate proceedings for the use of violence.

I left the country for two reasons. Firstly because of the idea that my children could end up in an orphanage. Secondly, because I was told directly that I would, in any case, be arrested for seducing minors.