Germany's Sigmar Gabriel has delivered his last annual economic outlook before switching to foreign affairs. Despite buoyant data, he warned some people were not benefiting and undemocratic forces threatened the EU. 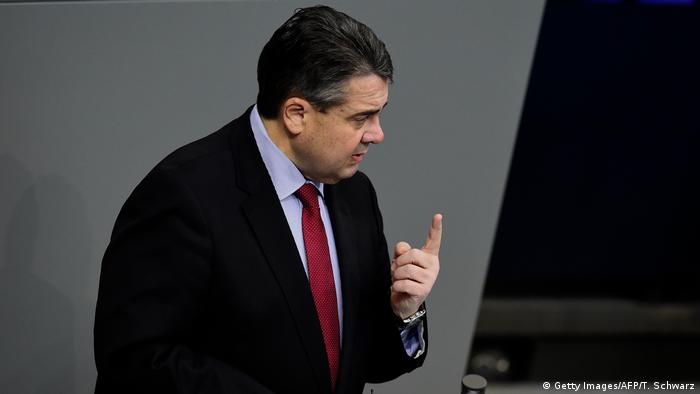 Outgoing Economy Minister Gabriel warned Germany that its 2017 growth forecast of 1.4 percent could not disguise a "dramatic" scenario should it be enveloped by further collapses of the European Union.

Referring to Brexit and far-right pushes ahead of Dutch and French elections between March and May, Gabriel said Germany could be left "isolated" by the disintegration of the "20th century's greatest civil project."

"One cannot overemphasize the dramatic nature of the situation," Gabriel told the Bundestag parliament, adding that export nation Germany could lose partners vital for open-border transactions.

Gabriel also reiterated warnings of growing gaps between rich and poor in industrial societies such as Germany's.

"We know all too well that not all persons in Germany have benefited. Finally, a few more have, thank God, but by far not everybody," Gabriel told parliament, where on Friday he is to be sworn in as foreign minister.

He will replace his Social Democratic Party (SPD) colleague Frank-Walter Steinmeier, who is tipped to become German president next month as Germany lays the groundwork for federal elections due on September 24.

The government's economic outlook tabled in the Bundestag parliament predicts record employment at 43.8 million people in work, up a further 320,000 in 2017.

Consumers, it said, were  spending on average more than in previous years and investing "strongly" in housing.

The federal budget would generate a surplus of 0.6 percent in relation to gross domestic product (GDP).

Industry was expected to invest more because of above-average utilization of its capacity due to slow but steady growth in foreign demand. That could, however, be dampened by trends towards protectionism, the report warned.

A parallel assessment from a panel of experts tabled in parliament alongside Gabriel's report warned of "numerous risks" within the world economy and urges the EU not to put its single market in doubt.

The assessors also accuse Merkel's government of failing to adequately use the "good" economic trends of recent years to institute reforms.

"Now is the moment for reforms," they wrote, in part to "strengthen the stability and performance of the European Union."

They also warned that the European Central Bank's (ECB) loose monetary policy had crippled the urge for reform and budget discipline. Upward trends were not self-sustaining.

"The monetary policy masks these problems and increasingly endangers stability on financial markets. An exit from this expansive monetary policy will be all the more difficult," the experts wrote. "The crisis in the euro-zone has intensified skepticism toward Europe."