Steinmeier poised to be Germany′s next president without conservative rival | News | DW | 14.11.2016

The conservative CDU and CSU parties have backed Social Democrat Frank-Walter Steinmeier to replace Joachim Gauck as president, paving the way for him to take up the post without a serious challenge. 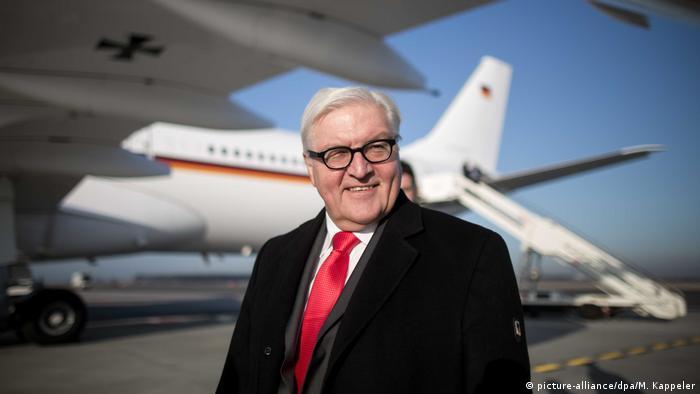 Speaking in Berlin on Monday, Merkel said the current foreign minister is "extremely suitable" for the position, describing him as "reliable and a politician oriented by balance and solutions."

He is a "man from the center of politics, respected in business and society, both at home and abroad," the chancellor added.

The CDU's Bavarian sister-party, the Christian Social Union (CSU), also gave its backing for Steinmeier. "We have come to an agreement, CSU and CDU," CSU leader Horst Seehofer said. "That is what's important."

The conservative Union's support clears the way for the current foreign minister to go unchallenged in taking over the presidency from Joachim Gauck on February 12. The grand CDU-SPD-CSU coalition enjoys an overwhelming advantage in the electoral assembly that will choose the new president, meaning challenges from a candidate fielded by the Left party or the Greens should be easily overcome.

Despite a promise to deliver a candidate by the end of October, top politicians in Berlin have been unable to agree on who to nominate for president. A number of big names have already been rejected. (13.11.2016)

The difficult search for the next German president

The Social Democrats want Foreign Minister Steinmeier as the next president, but there is resistance from both conservatives and the left. The search for Gauck's successor is stirring rancor in the governing coalition. (24.10.2016)

The German presidency is a largely ceremonial role that is meant to transcend party politics and serve as a moral compass speaking hard truths to the nation. Steinmeier tends to score well in personal approval ratings, and has recently exhibited some of the hard talk expected from a president - for instance being cool towards British Foreign Minister and Brexit figurehead Boris Johnson, and towards newly-elected US President Donald Trump.

Incumbent president Gauck announced earlier this year that he would not seek a second term in office on account of old age. He is currently meeting with leaders in Japan.

The CDU, SPD and CSU party heads had repeatedly held talks to discuss a joint candidate to replace Gauck. Such talks often proved acrimonious, according to reports.

After party heads met on Sunday for discussions, SPD leader Sigmar Gabriel reportedly stormed out after just three quarters of an hour.

The Social Democratic Party (SPD) was resolute on publicly nominating Steinmeier as a possible candidate - a move that left Merkel's conservatives with the choice of either supporting him or choosing a candidate of their own to offer a real challenge.

However, Union officials were reportedly unable to come up with an equally high-profile candidate.

Despite Sunday's allegedly heated talks, CDU and CSU party members pointed out that an agreement remained on the cards. In an interview with the German broadcaster ARD on Sunday, Norbert Röttgen (CDU) said that there would "not be any drama" if Steinmeier were backed by the conservatives for the presidency.

The CSU General Secretary, Andreas Scheuer, told German newspaper "Bild" that Steinmeier was "a good candidate, given this challenging time for foreign policy." Steinmeier has twice served as foreign minister in grand coalition governments, each time cooperating with the CDU/CSU and working under Merkel.

Both conservatives, however, criticized the SPD's Sigmar Gabriel for publicly backing Steinmeier without consulting coalition partners first. "This did not make the process of finding a candidate any easier," Röttgen said. The Union's preference would have been "for the coalition to nominate a candidate all together."