Gabriel: Germany's security is being protected in Iraq

Foreign Minister Gabriel has emphasized the importance of the fight against "IS" for Germany during a visit to Iraq. However, he said Berlin doesn't intend to expand its military aid to the war-torn country. 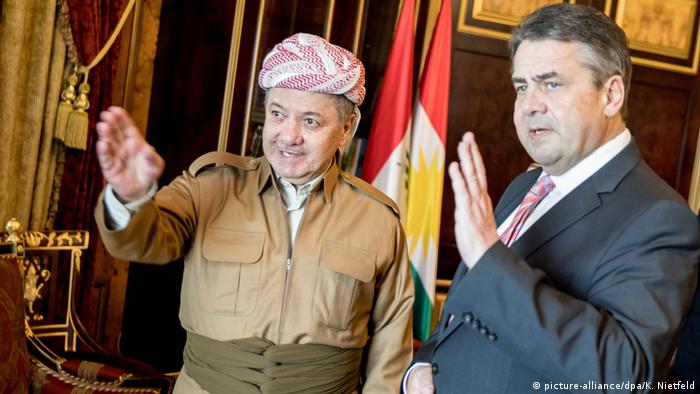 'IS' in talks with al Qaeda on 'possible alliance' - report

The leader of so-called 'Islamic State' (IS) has spoken to al Qaeda about a 'possible alliance,' according to Iraqi Vice President Ayad Allawi. The talks come as Iraqi troops close in on IS fighters in the city of Mosul. (18.04.2017)

UN: Mosul fighting has displaced nearly half a million Iraqis

A new UN report has revealed the humanitarian catastrophe caused by fighting against the so-called "Islamic State" (IS). One UN official called the number of displaced civilians "staggering." (17.04.2017)

German Foreign Minister Sigmar Gabriel became the first leading German politician on Thursday to visit territory in Iraq that had been reclaimed from the self-styled "Islamic State" (IS) group.

"As a person who comes from a peaceful society, you are totally shocked," Gabriel said in the heavily destroyed town of Bashiqa.

Gabriel delivered generators, water tanks and bulldozers to Bashiqa - located just 15 kilometers (9 miles) away from IS-held Mosul- to help with efforts to rebuild the town. Bashiqa's mostly Christian and Yazidi inhabitants fled when IS took the town back in June 2014.

Kurdish Peshmerga fighters retook the town last November with the support of the international anti-IS coalition. Until now, only 400 families have returned.

The German foreign minister also met with Massoud Barzani, the president of Iraq's largely autonomous Kurdish region, on Thursday where he praised the fighters' military efforts against IS.

"The Peshmerga's fight against the Islamic State also protects the security of Germany," Gabriel said during his visit to the region in northern Iraq.

Around 140 German soldiers who are training Peshmerga forces are stationed in Erbil, located some 85 km outside of Mosul. The Kurdish fighters have received a large amount of German weapons including 20,000 assault rifles, 400 rocket-propelled grenades, and 1,200 anti-tank missiles.

Although President Barzani thanked Gabriel for Germany's support, he said that the equipment had not been enough for the operation to retake Mosul from IS.

Barzani's appeal for more weapons may hit a snag, as one day prior while in Baghdad, Gabriel made clear that Germany would not be sending new arms shipments to IS-conflict areas in Iraq or expanding training. Instead, he emphasized that the fight against IS will not be won solely by military means.

Gabriel also said that the quality of life for the people of Iraq must be improved. "That is the best way to fight life-despising ideologies," he said.

Until recently, the German military had confined itself to aiding Peshmerga forces in the north, but sent its first Bundeswehr instructor to Baghdad in January to advise the Iraqi army. It has also supplied non-lethal equipment to Iraq's central government. Gabriel's recently announced restrictions on weapon deliveries and military training are likely then to affect the Kurdish fighters the most.

The German foreign minister was also restrained when responding to questions about Barzani's independence referendum in the Kurdish region slated to take place this year. He said that negotiations over the region's status were an "internal Iraqi matter."