Fukushima: How the ocean became a dumping ground for radioactive waste | Environment | All topics from climate change to conservation | DW | 11.03.2020 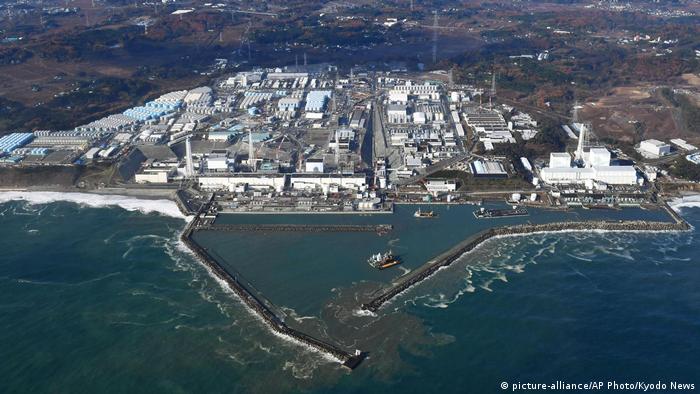 Almost 1.2 million liters (320,000 gallons) of radioactive water from the Fukushima nuclear power plant is to be released into the ocean. That's on the recommendation of the government's advisory panel some nine years after the nuclear disaster on Japan's east coast. The contaminated water has since been used to cool the destroyed reactor blocks to prevent further nuclear meltdowns. It is currently being stored in large tanks, but those are expected to be full by 2022.

Exactly how the water should be dealt with has become highly controversial in Japan, not least because the nuclear disaster caused extreme contamination off the coast of Fukushima. At the time, radioactive water flowed "directly into the sea, in quantities we have never seen before in the marine world," Sabine Charmasson from the French Institute for Radiological Protection and Nuclear Safety (IRSN) tells DW.

Radiation levels in the sea off Fukushima were millions of times higher than the government's limit of 100 becquerels. And still today, radioactive substances can be detected off the coast of Japan and in other parts of the Pacific. They've even been measured in very small quantities off the US west coast in concentrations "well below the harmful levels set by the World Health Organization," according to Vincent Rossi, an oceanographer at France's Mediterranean Institute of Oceanography (MIO).

Read more - What happens to nuclear waste from power plants? 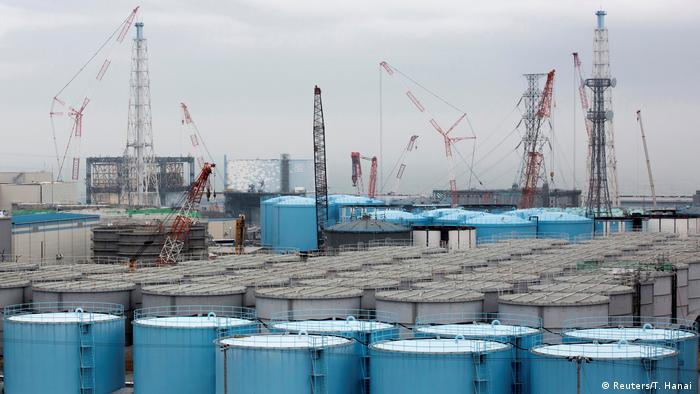 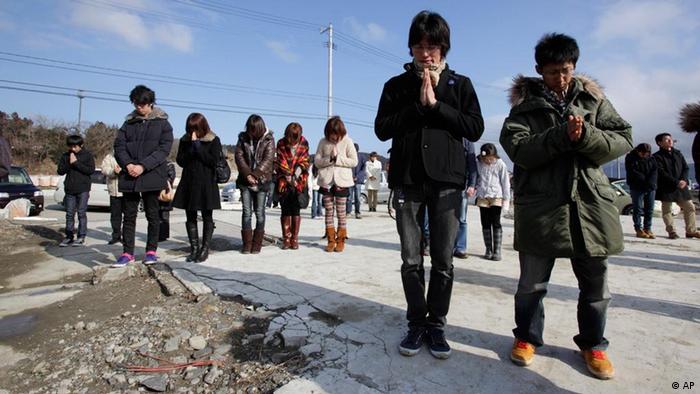 But that doesn't mean there's no risk, says Horst Hamm of the Nuclear Free Future Foundation. "A single becquerel that gets into our body is enough to damage a cell that will eventually become a cancer cell," he says.

A study from the European Parliament reached a similar conclusion. The research found that "even the smallest possible dose, a photon passing through a cell nucleus, carries a cancer risk. Although this risk is extremely small, it is still a risk."

And that risk is growing. Radioactive pollution in the ocean has been increasing globally — and not just since the disaster at Fukushima.

In 1946, the US became the first country to test an atomic bomb in a marine area, in the Pacific Bikini Atoll. Over the next few decades, more than 250 further nuclear weapons tests were carried out on the high seas. Most of them (193) were conducted by France in French Polynesia, and by the US (42), primarily in the Marshall Islands and the Central Pacific.

But the ocean wasn't just being used as a training ground for nuclear war. Until the early 1990s, it was also a gigantic dump for radioactive waste from nuclear power plants.

From 1946 to 1993, more than 200,000 tons of waste, some of it highly radioactive, was dumped in the world's oceans, mainly in metal drums, according to the International Atomic Energy Agency (IAEA). Several nuclear submarines, including nuclear ammunition, were also sunk during this time.

Is the ocean a perfect storage site?

The lion's share of dumped nuclear waste came from Britain and the Soviet Union, figures from the IAEA show. By 1991, the US had dropped more than 90,000 barrels and at least 190,000 cubic meters of radioactive waste in the North Atlantic and Pacific. Other countries including Belgium, France, Switzerland and the Netherlands also disposed of tons of radioactive waste in the North Atlantic in the 1960s, 70s and 80s.

"Under the motto, 'out of sight, out of mind,' the dumping of nuclear waste was the easiest way to get rid of it," says Horst Hamm.

To this day, around 90% of the radiation from discarded barrels comes from those in the North Atlantic, most of which lie north of Russia or off the coast of Western Europe.

"The barrels are everywhere," says ecologist Yannick Rousselet of Greenpeace France. He was present in 2000 when the environmental organization used submarines to dive for dumped drums a few hundred meters off the coast of northern France, at a depth of 60 meters (196 feet).

"We were surprised how close they were to the coast," Rousselet says. "They are rusty and leaking, with the radiation clearly elevated." 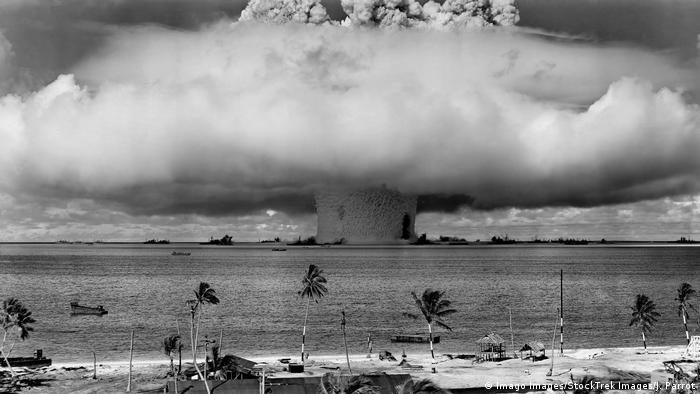 The radioactive pollution of the oceans began in 1946 when the US tested a nuclear bomb at Bikini Atoll Micronesia. 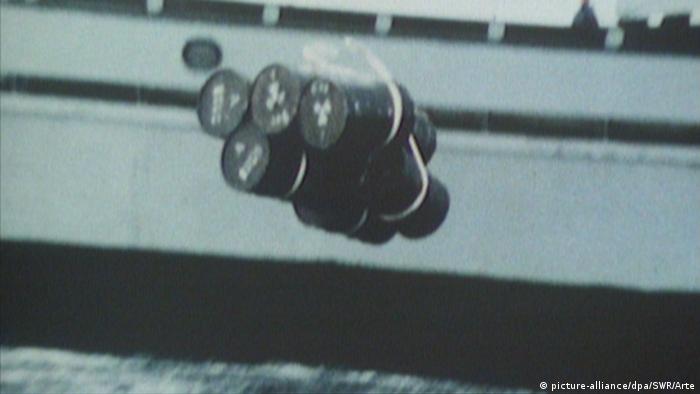 Nuclear waste barrels dumped in the sea decades ago, a common practice in the Channel between France and England in the 1960s, are now rusty and are leaking radioactive substances

In 1967, Germany also dumped 480 barrels off the coast of Portugal, according to the IAEA. Responding to a 2012 request for information from the Greens about the condition of those barrels, the German government wrote: "The barrels were not designed to ensure the permanent containment of radionuclides on the sea floor. Therefore, it must be assumed that they are at least partially no longer intact."

Germany and France don't want to salvage the barrels. And even Greenpeace activist Yannick Rousselet says he sees "no safe way to lift the rusted barrels" to the surface. That means nuclear waste will likely continue to contaminate the ocean floor for decades to come.

For Horst Hamm, the long-term consequences are clear. The radiation will be "absorbed by the marine animals surrounding it. They will eventually end up caught in fishing nets, and come back to our plates," he says.

In its 2012 response to the Greens, however, the German government described the risk to humans from contaminated fish as "negligible."

Rousselet sees things differently: "The entire area along the coast is contaminated by radiation — not just in the sea, in the grass, in the sand, you can measure it everywhere." 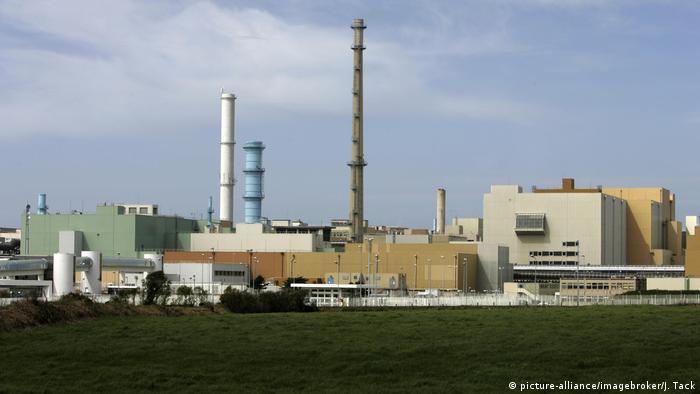 The reprocess in plant in La Hague is still discharging radioactive water into the sea. Cancer rates have increased in the region, according to a report by the European Parliament

The main reason behind the radiation along the northern French coastline isn't the underwater barrels, but rather the nuclear fuel reprocessing plant at La Hague. It is located directly on the coast and "legally discharges 33 million liters of radioactive liquid into the sea each year," says Rousselet. He thinks it's scandalous.

The dumping of nuclear waste in drums was banned in 1993 by the London Convention on the Prevention of Marine Pollution. But discharging liquid contaminated with radiation into the ocean is still permitted internationally.

According to a study by the European Parliament, statistics show cancer rates are significantly higher in the region surrounding La Hague. Cancer rates are also high near the nuclear processing plant in Sellafield in northern England. A study from 2014 concluded that the total amount of radioactivity discharged into the sea from the Sellafield plant over the years is equivalent to the amount released by the nuclear meltdown at Fukushima.

The report say a link to health effects "cannot be ruled out" even if there is no clear evidence to date of a link between illness and radioactive discharges from nuclear facilities.

"The exact effects of radioactive radiation are extremely difficult to measure and prove. We only know that it has an impact," says Rousselet, adding that it's crucial to walk away from everything that causes radioactive waste.

In Fukushima, the operating company of the Tokyo Electric Power Company nuclear plant claims that before the cooling water is discharged into the sea as planned, all 62 radioactive elements will be filtered down to safe levels — except for the isotope tritium. The advisory panel in Tokyo considers discharging the cooling water into the sea to be "safer" than other alternatives, such as evaporating the water.

Just how harmful tritium is to humans is a source of controversy. According to the plant operator, the concentration of tritium in the collection tanks is sometimes much higher than that of conventional cooling water from nuclear power stations.

"The local fishermen and residents cannot accept the discharge of water," Takami Morita of the National Research Institute of Fisheries Science said in a press release. While fish pollution levels are below the harmful limit, demand for fish from the region has dropped to one-fifth of what it was before the disaster.

Releasing the cooling water into the sea "is a good method because of the diluting properties of the water," Sabine Charmasson of the IRSN says. "There aren't any real problems on the security side, but it's difficult, because there are also social implications. It might be an appropriate method, but it's never easy to release radioactive substances into the environment."

In a press release, Greenpeace said: "There is no justification for additional, deliberate radioactive pollution of the marine environment or atmosphere."

Living Planet: How to deal with radioactive waste in our oceans