Japan has agreed to pay compensation to the family of a man who died of cancer after measuring radiation levels at the Fukushima nuclear plant. UN rights experts said Toyko put "tens of thousands" of workers at risk. 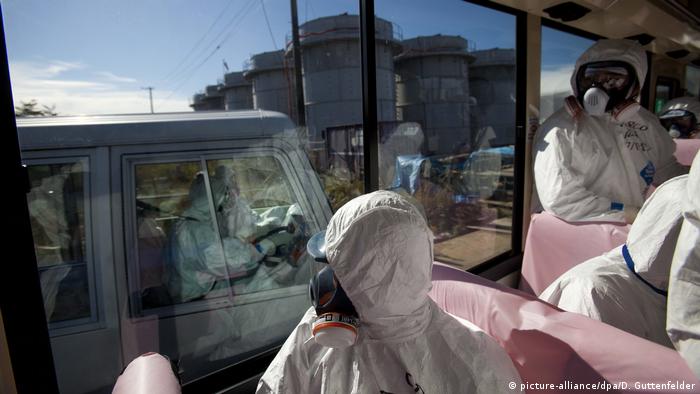 Japan has acknowledged the first person to die from exposure to radiation while working at the Fukushima nuclear power plant in the wake of its 2011 meltdown, according to Japanese media reports on Thursday.

The man, who was in his 50s, was involved in emergency work at the Fukushima nuclear plant. His work at the site included measuring radiation levels. He stopped working in 2015, and a year later was diagnosed with cancer.

The Japanese Health Ministry ruled last week that the man's family should be compensated after succumbing to lung cancer.

The ministry did not offer details about when he died, citing his family's request for privacy.

At least four other people involved in emergency work at the plant have been diagnosed with cancer, including leukemia and thyroid cancer. They have received government compensation.

A powerful underground earthquake triggered a devastating tsunami in March 2011. The tsunami swamped the Fukushima nuclear plant, causing a meltdown.

The earthquake and consequent tsunami left 15,894 people dead and 2,561 others missing, according to the Japanese authorities.

Last month, UN human rights experts criticized the Japanese government for putting "tens of thousands" of people at risk during emergency operations in the wake of the meltdown.

The experts raised concerns "about possible exploitation by deception regards the risks of exposure to radiation," along with other issues.

According to media reports, Japan's biggest nuclear operators are discussing a potential partnership to overcome a crisis in the sector caused by the Fukushima nuclear disaster seven years ago. (22.08.2018)