UN human rights experts have said the workers, most of them migrants, risked "exposure to radiation and coercion." They have called on Japan to protect the workers cleaning up the damaged nuclear power station. 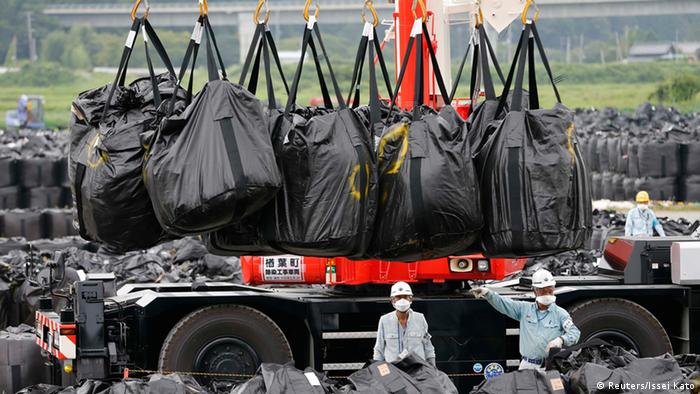 The three experts, who report to the UN Human Rights Council, warned that exposure to radiation remained a major risk for workers handling the cleanup of the plant.

"Workers hired to decontaminate Fukushima reportedly include migrant workers, asylum-seekers and people who are homeless," said the three: Baskut Tuncak, an expert on hazardous substances, Dainius Puras, an expert on health, and Urmila Bhoola, an expert on contemporary slavery.

"We are deeply concerned about possible exploitation. The workers risk exposure to unhealthy levels of radiation not only because they work in places with high radiation but also because they work for longer hours than they should," Tuncak told DW after the statement was released.

"They are not sufficiently trained, which exposes them to serious health risks. Also, most of them are economically vulnerable, who may not turn down the job despite hazardous working conditions," he said.

Tuncak added that the team's observations were based on "repeated and reliable" reports.

TEPCO, the owner of the nuclear power station, which was damaged by a tsunami in 2011, has faced criticism for its treatment of workers involved in the cleanup, which is expected to take decades.

In July, a survey conducted by the Japanese Justice Ministry showed that four construction companies had hired foreign trainees for radioactive decontamination work at the plant.

The survey found that one of the four companies paid only 2,000 yen ($18, €16) per day to the trainees, a fraction of the 6,600 yen provided by the government as a special allowance for decontamination work.

An investigation by Reuters news agency in 2013 also found widespread labor abuses, including workers who said their pay was skimmed.

The UN experts called on Japanese authorities to act urgently to protect the workers.

"The government must conduct greater oversights. In cases of wrongdoing, it must prosecute the wrongdoers to set an example for others," Tuncak said.

"The government must also allow independent experts to visit Fukushima to review the existing work conditions."

Tuncak said Japan has not responded to several of his and other experts' requests to visit the damaged nuclear station.

"It's regrettable, as the statement is based on one-sided allegations that could exacerbate the suffering of people in the disaster-hit areas," the ministry said.  "We properly handled problematic cases in the past and do not regard
it as a situation which requires any urgent response," an unnamed official at the Health, Labour and Welfare Ministry told Kyodo.

Japan's nuclear energy sector is riven by poor management, is overly bureaucratic and staffed by people who no longer have any pride in their jobs. So accidents are inevitable, say critics. Julian Ryall reports. (12.06.2017)

Germany has measures on the books to close all of the country's nuclear reactors by 2022. Although a majority of people in Germany oppose nuclear power, there are conflicting views on just how to phase it out entirely. (15.06.2017)