As contaminated water leaks from the Fukushima nuclear plant into the Pacific Ocean, concerns rise over the effects of radiation exposure to marine life. 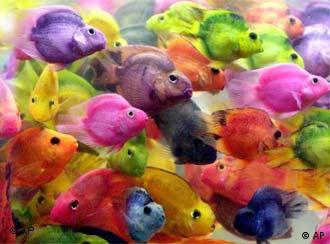 The risks to marine life are not yet entirely clear

Fears for the safety of sea creatures in the waters around the stricken nuclear plant were compounded on Tuesday when the Japanese government took the unprecendented step of imposing a legal limit for radioactive iodine in fish.

Government spokesman Yukio Edano said Tokyo had decided to "temporarily" set the acceptable levels at 2,000 becquerels per kilogram, the same as applies to vegetables.

The move was sparked by the discovery of significantly higher concentrations of radioactive iodine in the sand lance species of fish caught south of Fukushima, from where contaminated water has been leaking into the ocean. 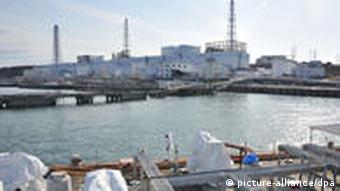 Fukishima is still to be secured

With the plant's operators saying they have detected 7.5 million times the legal limit of radioactive iodine in seawater collected close to the site of the leak, fishermen are asking questions about their living, consumers about their health, and environmentalists about what is going on beneath the surface of the same ocean that wrought the havoc in the first place.

Günter Kanisch, a physicist with the Johann Heinrich von Thünen-Institute, the Federal Fesearch Institute for Rural Areas, Forestry and Fisheries told Deutsche Welle that it is hard to say how extensive the damage is on the strength of the available data.

"Of course I cannot say for sure because nobody has been able to look down there, but I imagine that a lot marine life along the coastal area would have been wiped out by the tsunami," he said, adding that any which had survived would certainly have become contaminated.

And while the suggestions are that the area in the direct vicinity of the plant will not be clean of radioactivity for many years to come, scientists are also saying that it will become significantly diluted in the vast body of water, not to pose a threat.

"The Japanese authorities have recorded levels thirty kilometers out to sea, along the line of the coast, and concentrations are so low that they are not harmful to marine life," Kanish added.

But Onno Gross, president of the Deepwave Initiative for the Protection of the High Seas, is more skeptical. He told Deutsche Welle that dilution is not a given.

"Even if the currents are favorable, not all radioactive particles will be carried out to sea, some will sink to the ocean floor where they will be absorbed by plankton and enter the food chain," he said.

Life has never returned to normal at Chernobyl

As far as he is concerned, there is every reason to be worried about the lasting effects on the marine eco-systen.

"We saw it with Deep Sea Horizon that such catastrophes come with environmental consequences," he said, adding that while the coral reef which was destroyed by the oil disaster will likely regenerate within 50 to 100 years, damage caused by exposure to radiation is on another scale altogether.

Gross says radioactive particles will remain in the coastal system for more than the foreseeable future.

"Cesium will be everywhere in the water, just as it was after Chernobyl," he said. "What we are talking about is a damn long time."

Fukushima to be a lesson for nuclear countries

The Fukushima nuclear disaster has ignited worldwide debate about the safety of nuclear energy. It has also provided a blueprint for how governments can improve safety regulations. (04.04.2011)

Opinion: In wake of Fukushima and North Africa, what's next for Desertec?

The nuclear disaster in Japan and the liberation movements in North Africa are highly relevant for the future organization of energy supplies in the world, argues guest columnist Matthias Ruchser. (04.04.2011)

Fears have grown about radiation exposure since Russia's attack on a Ukrainian nuclear facility. But taking iodine won't always help. It can, in fact, be dangerous.

Rescuers have found at least 10 bodies after a vessel with 26 people on board went missing in rough seas off Hokkaido. Japanese authorities have pledged to investigate the incident.

Rescuers are still searching for over a dozen people who were on a tour boat when it sank in northern Japan. Hopes for survivors are dwindling, however, as the region's waters are only a few degrees above freezing point.