From COVID to malaria: The potential of mRNA vaccines | Science | In-depth reporting on science and technology | DW | 29.07.2021

From COVID to malaria: The potential of mRNA vaccines

Messenger RNA are little helpers, and scientists have long studied their potential in medicine. COVID-19 gave them a chance to prove it. Could malaria be next? 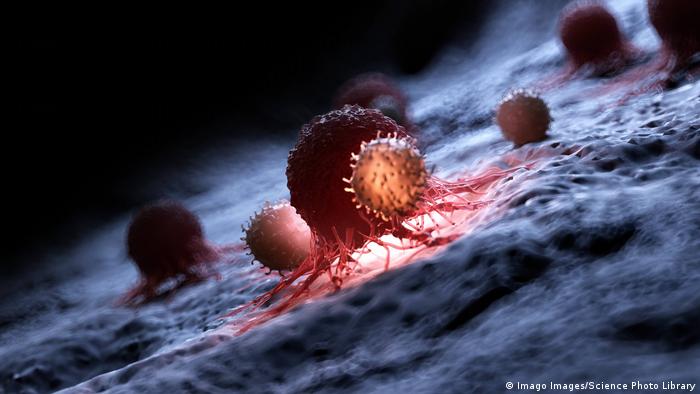 Will white blood cells win the battle against cancer with the help of a mRNA vaccine?

Malaria vaccines have had a slow time of it, lately. Progress on getting a vaccine out into the community has been sluggish.

There is a vaccine called RTS,S which, it is said, protects against about a third of malaria infections. That's been out for a bit and is approved.

Since 2021, there is a new vaccine called R21/Matrix-M, which has a reported efficacy of 75%. But it has yet to be approved.

And what if there were even better vaccines? That's what BioNTech founder Ugur Sahin has been thinking about.

On July 26, Sahin announced that his company — which coproduces the BioNTech-Pfizer COVID-19 vaccine — would now also focus on a malaria vaccine. They hope to get into clinical trials by the end of 2022.

BioNTech's proposed malaria vaccine will be based, they say, on messenger RNA (mRNA) technology.

Along with a vaccine from the US-based company Moderna, the BioNTech-Pfizer COVID vaccine has been among the first to use mRNA technology widely and, according to the current data, successfully.

But what is mRNA technology? And how far have we got with it? Here are some of the most important questions and answers.

How does mRNA work?

RNA stands for ribonucleic acid. Its main task is to convert information (or messages) from the human genome (our DNA) into protein. It takes genetic information and transports it to protein factories within our cells, known as ribosomes, where it's biosynthesized into protein. Some specific proteins, resembling those of pathogens, are vital for triggering the production of antibodies, which the body uses to fight infections.

Scientists want to take advantage of the process with vaccines that deliver artificially produced mRNA to ribosomes.

The mRNA in vaccines carry the building instructions, as it were, for certain surface proteins of pathogens — otherwise known as things that make us sick.

So, in the case of SARS-CoV-2, the virus that causes the COVID-19 illness, mRNA vaccines inform our ribosomes about the COVID spike protein, the thing that hooks into our cells and infects us.

The ribosomes produce this protein themselves and demand an immune response. The body then produces antigens that will target those homemade spike proteins, or in the case of a real COVID-infection, the virus.

And scientists would like to do the same with cancers. They are trying to identify specific characteristics on the surface of cancer cells and develop an artificial mRNA. The hope is that mRNA would then help the body produce an appropriate immune response to the cancer. The same goes for bacterial infections and so-called plasmodia, such as malaria.

What's the difference between mRNA and other vaccines?

The most significant difference between an mRNA vaccine and "live-attenuated" or "dead vaccines" is that those more traditional ones carry disabled viruses with the respective surface proteins with them.

mRNA vaccines, on the other hand, trigger the production of those proteins in the cells.

That makes it easier and quicker for vaccine developers to produce new vaccines and adapt existing vaccines to variants and mutations of a virus. They only need to change specific elements of a vaccine, rather than the whole thing.

How new is the idea of messenger RNA?

The idea is not at all new.

In 1961, the biologists Sydney Brenner, Francois Jacob and Matthew Meselson discovered that RNA transported genetic information. They also found that the process could be used to produce proteins in cells.

But it wasn't until 1989 that virologist Robert Malone managed to demonstrate the process.

Researchers carried out the first laboratory studies with mRNA vaccines on mice in 1993 and 1994.

One of their targets was the Semliki Forest virus, which was detected in 1942 in Uganda where it infected rodents.

The first clinical trials with mRNA vaccines and humans were done in 2002 and 2003. Those trials targeted cancer cells.

In the 10 years since those initial studies, researchers tended to keep their focus on cancer vaccines.

What diseases could mRNA vaccines help us fight?

There's a whole list of diseases that researchers are targeting with proposed mRNA vaccines.

Researchers hope now to achieve quick results, especially since mRNA vaccines have been shown to be effective against COVID-19.

Cancer is one of the most widely studied areas in mRNA vaccine research.

In June, BioNTech started a Phase 2 trial with an mRNA vaccine against a type of skin cancer.

But it's clear that researchers won't be able to transfer the experience gathered through mRNA vaccines and COVID-19 to cancer "one-to-one." Cancers are much more than just viruses, and the immune response is very different.

When it comes to research into malaria vaccines, there are similar questions. Malaria is a single-cell pathogen, and we've seen over the years just how difficult it is to fight them.

Scientists think a key to success with cancers and malaria will be to identify proteins that are central to the functioning of those pathogens, and which will produce the strongest immune response.

In both cases, the human immune system will have to kill off all the bad cells, while leaving all the good or healthy cells intact and untouched.

It's too early to say whether mRNA technology will revolutionize medicine. But it's clear that researchers hope it will do that. If all we achieve is an mRNA vaccine against the common flu as a start, we would have gained a lot.

If researchers find they can use mRNA to mobilize the immune system and target specific pathogens to destroy them, that would indeed be a breakthrough. That would enable the technology to be used in other areas, previously overlooked or untested.

It may even be revolutionary enough if mRNA-enabled vaccines grow into a first line of defense, rather than our current approach of relying on medicinal treatments once an infection has taken hold. Vaccination is cheaper for both people and national health care systems.