Fresh violence in Kashmir exposes the need for diplomacy | Asia | An in-depth look at news from across the continent | DW | 02.10.2018

Fresh violence in Kashmir exposes the need for diplomacy 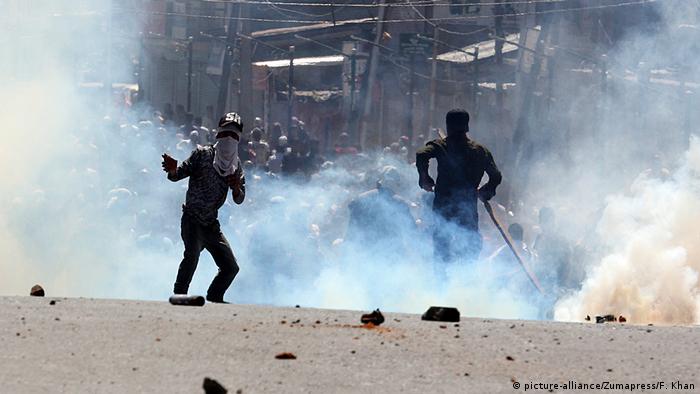 On September 27, six people were killed in separate incidents in Kashmir, including three insurgents, two civilians and a soldier. The deaths triggered fresh demonstrations in Kashmir's largest city, Srinagar.  The upswing in violence comes after a spike in diplomatic tensions between India and Pakistan over the restive region.

The Indian foreign ministry recently called off a meeting with the Pakistani foreign minister on the sidelines of the UN General Assembly session over the killing of several Indian border guards and the release of postage stamps portraying Kashmiri militant rebel commander Burhan Wani. Additionally, on the day India canceled the talks, insurgents killed three local policemen in southern Kashmir.

The announcement of the meeting between the nuclear-armed South Asian countries had been considered an encouraging sign restarting derailed talks. India and Pakistan have not held talks since 2015, a year after the Narendra Modi-led BJP came into power in India.

"Having talks between the two countries provides a way for ending the violence. Until there is dialogue, the violence won't stop," Sheikh Showkat Hussain, an academic in Kashmir, told DW. Pakistani army soldiers gather in 2016 near the Line of Control (LOC), dividing Kashmir between Pakistan and India

Dialogue instead of bloodshed

Weary of the day-to-day bloodshed, residents say they want an end to conflict.

"In the past two years, not a single day has passed without killings or gunfights. We are fed up of all this now. The two countries don't care about the people dying here every day," said Mukhtar Ahmad, a resident of south Kashmir's Shopian. "The war here is getting dirtier and no one talks about it."

Since 1989, Muslim insurgents have been fighting Indian forces in the Muslim-majority restive region, calling for a merger with Pakistan or an independent state.

India and Pakistan have fought two of their three wars since independence in 1947 over Kashmir, which they both claim in full but the rule in part.

India accuses Pakistan of training and arming the rebels in the portion it controls and sending them to the Indian side, a claim its neighbor denies.The protracted insurgency in Kashmir has claimed tens of thousands of lives.

Parvin Sawhney, a New-Delhi based defense expert, told DW that India has no alternative but to talk to Pakistan. He said that killings in Kashmir will continue in the absence of political outreach, adding that New Delhi is not showing any interest in dialogue.

"Before we are pushed into a situation where India has no choice, we must start a dialogue," he said.

Contrary to the tough stance of New Delhi over talks with Pakistan, the region's pro-India political parties support dialogue.

"Continuation of the dialogue between two countries is the only way available to settle all disputes," Farooq Abdullah, the senior leader of National Conference party, which has ruled
the region most of the past seven decades, told DW.

The ongoing conflict in the region is posing a fresh challenge as insurgents are increasingly targeting police forces.

On the early morning of September 21, insurgents raided nearly a dozen homes of policemen in two villages of south Kashmir and abducted three, whose bullet-riddled bodies were recovered 30 minutes after their abduction.

On the same day, the Indian forces killed five suspected militants. In the past several months, militants have abducted and tortured to death many local policemen. This year more than 30 local policemen, most of them hailing from the districts of south Kashmir, have been killed.

Family members of police are also targeted. On the evening of August 30, 25-year-old Nasir Ahmad Mir was walking toward his friend's house in Midoora Village of Tral in the southern part of Indian-administered Kashmir when masked men blindfolded him and bundled him into a car. Mir's father works as a cook with the region's police department"

"For half an hour the car continued to move. I had no idea what was happening, I could not get an idea where I was," Mir told DW. "When the men reached a dense forest, I could sense the situation. They removed the cover from my eyes."

Mir says the rebels offered him snacks, juice, and warm clothing as they spent the night in a forest, somewhere in the southern part of Kashmir.

"They told me that they don't want to harm me but they were forced to do so because their families were being targeted by the security forces," he said, adding that the captors recorded him on video and made him appeal to the  police and army in Kashmir not to harass their family members. Mir was freed after 48 hours. 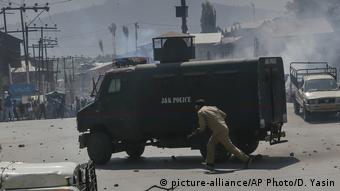 An Indian policeman takes cover during protests in Srinagar, June 2018

A tough place to work

In job-starved Kashmir, the role of the police is much more complex than just fighting the insurgency. Being the second largest employer, the region's police force has a capacity of around 90,000 policemen, and 31,000 Special Police Officers (SPO) and temporary employees.

What's worrying for the authorities is that a large number of these policemen, 20,000, hail from the volatile districts of the southern part of Kashmir, the rebel stronghold.

After the spree of killings, two dozen SPOs announced their resignation in video messages posted on the social media. The Indian Home Ministry denied such resignations and called it "propaganda". The authorities also suspended the internet in southern Kashmir, to prevent videos from spreading.

Rafi Ahmad Mir, spokesperson of pro-India, Peoples Democratic Party (PDP) said that the dialogue is the only way forward to find a solution to the conflict where civilian causalities have increased.

"Unfortunately, the Indian government says one thing and does something else on the ground," Ahmad Mir said.

For almost a year, New Delhi has been trying to pacify angry protesters in Kashmir. DW's Shamil Shams says an intolerant India under PM Modi's leadership cannot bring the disgruntled Kashmiri youth under its fold. (27.04.2017)