New Delhi has refused to engage in a dialogue with Islamabad until Pakistan ends its alleged support to militants in the disputed Kashmir region. The US has also piled pressure on Islamabad to act against jihadists. 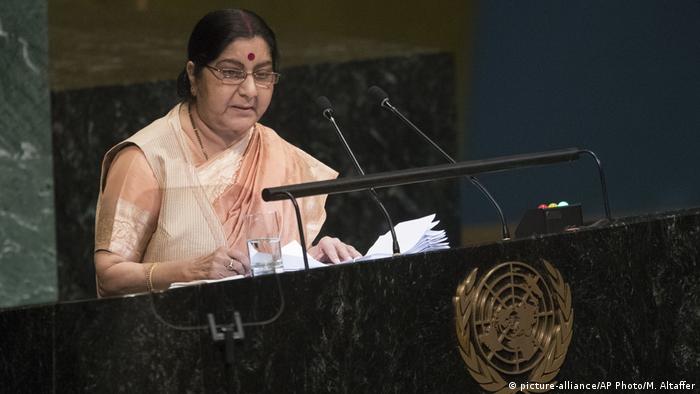 In her speech at the United Nations General Assembly (UNGA) in New York, Swaraj accused Pakistan of harboring and aiding terrorists.

"In our case, terrorism is bred not in some faraway land, but across our border to the west," Swaraj said. "Our neighbor's expertise is not restricted to spawning grounds for terrorism; it is also an expert in trying to mask malevolence with verbal duplicity," she added.

Indian foreign minister said that Hafiz Saeed, the alleged mastermind of the 2008 Mumbai attacks, "still roams the streets of Pakistan with impunity."

The Indian Foreign Ministry said it cancelled the talks following the "latest brutal killings of our security personnel by Pakistan-based entities" in Kashmir, and the release of a series of Pakistani postage stamps "glorifying a terrorist and terrorism."

"We accepted the [talks] proposal," Swaraj said. "But within hours of our acceptance, news came that terrorists had killed one of our jawans (troops). Does this indicate a desire for dialogue?"

For his part, Pakistani Foreign Minister Qureshi, who also addressed the UNGA on Saturday, said the new government headed by cricketer-turned politician Imran Khan "is keen to pursue a policy of partnership for peace, security and prosperity in our immediate neighborhood and beyond."

Qureshi, however, insisted that "the unresolved Jammu and Kashmir dispute hinders the realization of the goal of a durable peace between our two countries."

Since 1989, Muslim insurgents have been fighting Indian forces in India-administered Kashmir — a region of 12 million people, about 70 percent of whom are Muslim. India and Pakistan have fought two of their three wars since independence in 1947 over Kashmir, which they both claim in full, but rule in part.

Analysts say that Qureshi's UNGA speech is proof that the new Pakistani government has not changed its policies towards India and Kashmir. They also say that Pakistan cannot win India's trust on peace while glorifying Kashmiri militants.

Siegfried O. Wolf, director of research at the Brussels-based South Asia Democratic Forum (SADF), says that Islamabad needs to separate the Kashmir dispute from the peace talks if it wants productive dialogue with its neighbor.

"Pakistan's involvement in the Kashmir conflict will always complicate the issue, as Islamabad's international reputation as an alleged Islamist hub is counterproductive for the Kashmir plight," Wolf told DW.

"But Pakistani authorities think that if India gets militarily involved in the Kashmir conflict, it will have a negative impact on India's economic growth and international repute. Also, India's rights violations in Kashmir helps the Pakistani military to justify its dominance inside Pakistan," Wolf said.

The Trump administration has also increased pressure on Pakistan to act against jihadist groups that are active on its soil. The US has stopped much of its military aid to the Islamic country.

Peace activists in India and Pakistan urge their governments to restart peace talks and bury the hatchet. They say the dispute over Kashmir and terrorism has held back the progress of the two countries for decades.