French President Emmanuel Macron says French arms sales to Egypt would go ahead despite its poor human rights record. At a meeting with that country's president, he said Egypt's fight against terrorism was paramount. 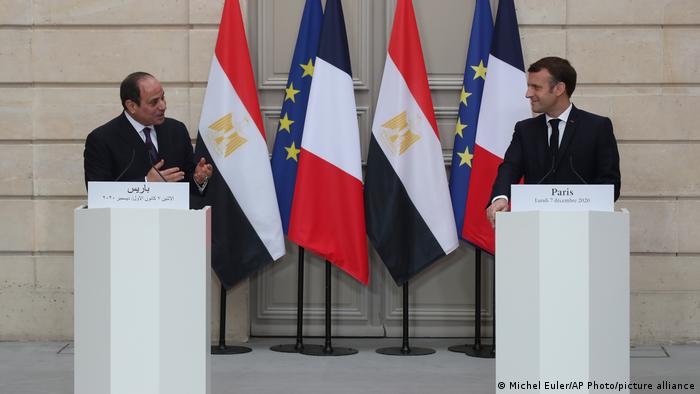 French President Emmanuel Macron said on Monday that concerns over human rights violations in Egypt would not affect the future sale of French arms to that country, as Cairo should retain its ability to fight terrorism in the region.

"I will not condition matters of defense and economic cooperation on these disagreements [over human rights]," Macron said at a joint press conference with Egyptian President Abdel-Fattah el-Sissi.

"It is more effective to have a policy of demanding dialogue than a boycott which would only reduce the effectiveness of one of our partners in the fight against terrorism," he added.

Macron has previously voiced concern that Egypt might turn to the West's rivals, China and Russia, if it did not receive adequate support from Europe. El-Sissi was welcomed to France with much pomp and ceremony

The comments by the French leader are likely to jar with human rights groups, 20 of which issued a joint statement ahead of Monday's meeting condemning France's strategic partnership with Egypt.

Egypt was "abusively using counterterrorist legislation to eradicate the legitimate work in favor of human rights and suppress all peaceful dissent in the country," the statement said.

Since taking power in a 2013 coup, el-Sissi has been in charge of a massive crackdown, targeting not only Islamist supporters of his freely elected predecessor, Mohamed Morsi, but also pro-democracy activists.

Just days before el-Sissi arrived in France, Egyptian authorities released three workers from the Egyptian Initiative for Personal Rights, who were detained in November following a meeting with diplomats from Western countries. An investigation is still pending into charges of their belonging to a terrorist group and spreading false news.

At the press conference, Macron welcomed their release and said he had "frankly" raised the issue of human rights with el-Sissi "as one does among friends."

He also thanked the Egyptian general-turned-president for his support after France was targeted by calls for a boycott in much of the Muslim world when Macron defended the right to make caricatures even if they offended religious sensibilities. His statements backing the liberty to publish such potentially contentious material came after the murder of a French teacher in October who had shown caricatures of the Prophet Muhammad to his class during a course on free expression

El-Sissi was welcomed to Paris on Monday with a cavalry parade.