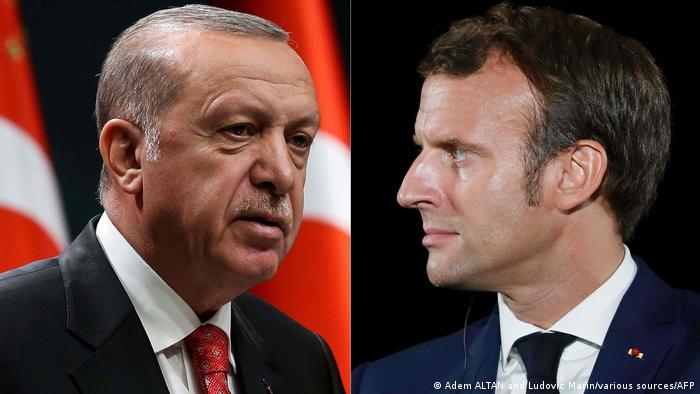 French President Emmanuel Macron has accused Turkey of exploiting the controversy over the prophet Muhammad cartoons to stoke post-colonial resentment in Africa.

In an interview with Jeune Afrique magazine last week, Macron accused Turkey of spreading anti-French sentiment in Africa. It's the latest battle of words in a Turkish-French spat that has been playing out for months.

Macron also said Turkey was stoking misunderstanding around France's defense of free speech, including the right to publish caricatures of Prophet Muhammad, which are forbidden within Islam.

At the beginning of October, Macron declared that "Islam is a religion that is in crisis all over the world today."

Two weeks later, French high school teacher Samuel Paty was beheaded by Muslim teen after he had shown his class a cartoon of the Prophet Muhammad taken from the French satirical magazine Charlie Hebdo.

Since then, Macron has been fervently defending free speech and decrying radical Islam — provoking outrage in many parts of the Muslim world.

"When I decided to attack radical Islam […] my words were distorted," Macron told Jeune Afrique. "By the Muslim Brotherhood, quite widely, but also by Turkey, which has the ability to influence a lot of public opinion, including in sub-Saharan Africa."

Push for influence in Libya

Political analyst Sinan Ulgen, the chairman of Edam, an Istanbul-based independent think-tank, said the Macron-Erdogan face-off is part of a wider and growing rivalry between France and Turkey over Africa.

"There is a different positioning regionally with France having established a strategic alliance with the United Arab Emirates ostensibly to fight against the influence of political Islam in the Middle East and Northern Africa," he said.

"Turkey is seen […] as belonging to the other camp, namely of supporting political Islam through its relationship with the different entities and the Muslim Brotherhood," he said.

Turkey and France back rival sides in the Libya conflict. Turkey has been openly backing President Fayez Sarraj and his Government of National Accord in Tripoli. France supports eastern commander Khalifa Haftar and his self-styled Libyan National Army.

"Right now in North Africa, there are two challengers to France: China and Turkey. [France] is used to thinking it is the only rooster in the neighborhood," he said.

"Turkey, as a newcomer, an emerging power, its interests, and presence is threatening French interests and vice-versa," said Emre Caliskan, a Project Research Collaborator at Oxford University, pointing to visits by Turkey's Foreign Minister to Mali in September and Niger and Togo in July.

Mevlut Cavusoglu was the first high-level non-African official to visit Mali since the coup in August.