France has promised to do much more to fight its domestic abuse problem after thousands rallied to end violence against women. The country has some of the worst rates of domestic violence in Europe. France has revealed dozens of new initiatives aimed at tackling the country's problem with domestic violence, after massive rallies against domestic abuse took place in France and abroad.

"The first success of this effort is to break this chain of silence," said Philippe on Monday.

At least 117 women have died this year in France at the hands of a current or former partner, a count by local media shows. For 2018, that figure stood at 121. Since January, around 213,000 women have been victims of physical or sexual domestic violence.

Domestic violence rates in France are among the highest in Europe, with President Emmanuel Macron calling the reality of domestic abuse "France's shame."

The new measures include €360 million ($396 million) in government funding for projects to be launched in 2020. Philippe said the measures were aimed at correcting "dysfunctions" in the system, and said he hoped the investment would serve as "an electroshock in our society."

Monday's announcement marked the culmination of two months of talks on the issue. Activists have increased pressure on the French government this year, tired of seeing the existing structures fail to keep women safe. Over the weekend in Paris and other French cities, tens of thousands rallied for greater action.

France's plans came as tens of thousands of people around the globe demonstrated to mark the International Day for the Elimination of Violence Against Women.

Growing frustration at high rates of femicide — or the killing of a woman or girl, typically by a man — inspired the demonstrations. According to the United Nations, around 87,000 women and girls were murdered globally in 2017, the last year such figures were available.

In Spain, a weekend of protests carried over into Monday, with thousands taking part in a march in Madrid. Protesters marched in remembrance of more than 1,000 women killed by their partners or former partners since official record keeping began in 2003.

Protests also took place in Russia, Sudan and South Africa, among other countries. In Istanbul, riot police fired tear gas and plastic bullets to discourage a group of around 2,000 protesters. 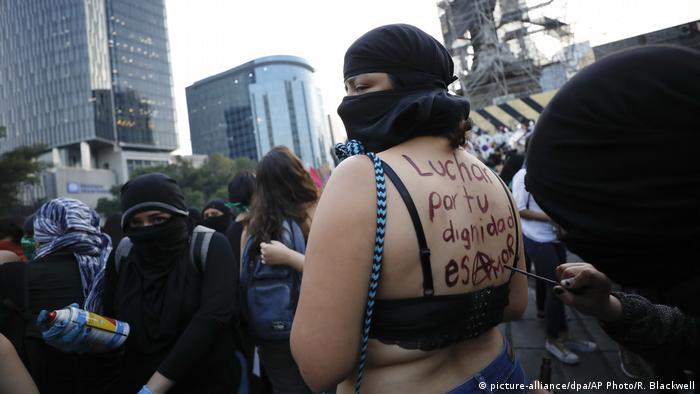 Demonstrations in Mexico also turned violent, with masked female protesters in Mexico City smashing windows with sledgehammers and setting fires. The capital recently declared a "gender violence alert" in response to the high rate of women murdered in the city.

Femicide has become an intense issue in Mexico, where more than nine women are murdered every day. The wave of resulting protests has been dubbed the Glitter Revolution, after a stunt where protesters dumped pink glitter on a security minister.

The UN has warned that more global action is needed against domestic abuse, and the global police cooperation agency Interpol made the rare move on Monday of calling for support in finding eight international criminals wanted for crimes of violence against women.

Teaching women to protect themselves

Violence against women: When daily life becomes a nightmare 25.11.2021

Every two-and-a-half days a woman in Germany dies at the hands of her partner or former partner, according to figures presented on the International Day for the Elimination of Violence Against Women.