Tens of thousands of protesters have denounced France for having among the highest rates of domestic violence against women in Europe. More than 100 women have been killed this year by a current or former partner.

Protesters marched through the French capital and several other cities on Saturday to demonstrate against domestic violence, just days before the government announces new measures to tackle the issue.

Tens of thousands of people, many of them female activists from the #NousToutes (All of Us) association, rallied in Paris. A wave of purple flags and signs snaked from the Place de l'Opera to the east of the city, and many protesters chanted: "Abuser, you've had it, women are in the street!"

Other rallies were held in cities including Lyon, Strasbourg, Bordeaux and Lille.

Despite France's progressive reputation, the country has among the highest domestic violence rates in Europe, in part because of a poor police response to reports of abuse. 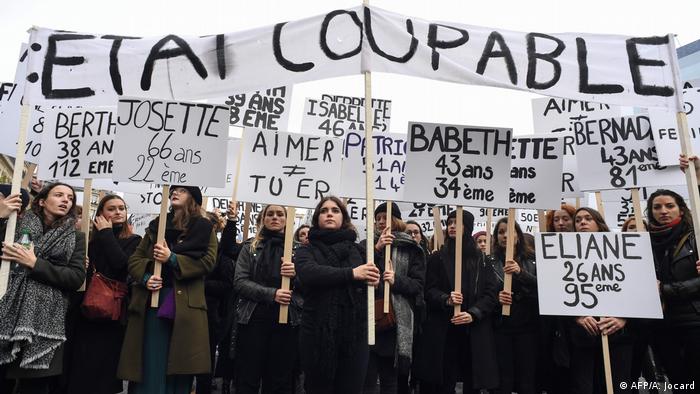 There are differing figures on the number of femicide victims, but all are over the 100 mark

A 2014 European Union survey of 42,000 women across all 28 member states found that 26% of French respondents said they had been abused by a partner since age 15, either physically or sexually. The figure is the sixth-highest among EU countries.

Spain, by contrast, slashed its domestic violence rates following a series of legal and educational measures launched in 2004.

Marital violence affects 220,000 Frenchwomen every year, according to separate French statistics. Activists also warned that femicide is a growing problem — 130 women have been killed in France this year by a current or former partner.

"Every woman you talk to — you could ask your mother or your sister — has a story of sexual violence in one way or another," she said. "This has to stop. I think men understand that, and there are many of them here with us.''

On Monday, his government is set to increase police powers to seize firearms from people suspected of domestic violence and prioritize police training to ensure they take women's complaints seriously.

Some of Saturday's marchers want €1 billion ($1.1 billion) in government investment, though the funding is expected to fall far short of that.

The marches took place ahead of the United Nation's International Day for the Elimination of Violence against Women, also on Monday.

The UN says some 87,000 women and girls were killed in 2017, over half of them by their spouse, partner or own family.

Loopholes in Germany's penal code allow upskirting — the act of secretly taking images under a person's clothes without consent — to go unpunished. The movement against upskirting is picking up steam across Europe. (12.09.2019)

Far more people are killed in homicides around the world than in conflict zones, a sweeping UN study has found. The rate of women being killed due to domestic violence is also on the rise. (08.07.2019)