The judges said they couldn't convict the men of sexual assault — Spain's equivalent of rape — because the victim was in an "unconscious state." Women's rights groups have urged authorities to change the law immediately. 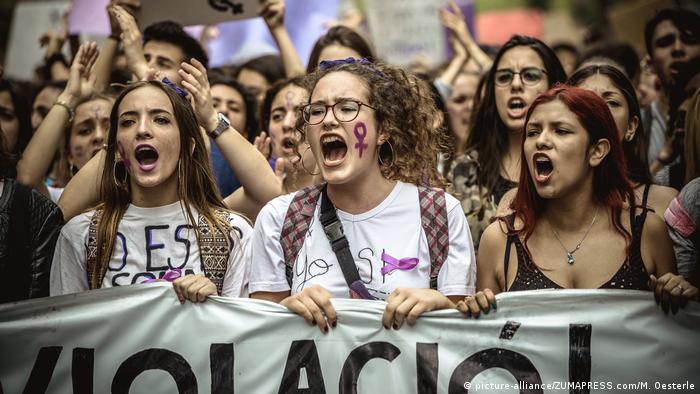 Women's rights groups on Friday urged Spain to change its laws after five men accused of gang-raping an unconscious 14-year-old in Catalonia were acquitted of rape charges.

The judges argued that they could not convict the men on sexual assault — Spain's equivalent of rape — because the girl was in an "unconscious state" after consuming drugs and alcohol.

The men were handed prison sentences for sexual abuse ranging from 10 to 12 years, instead of the 15 to 20 years that comes with a sexual assault conviction.

'Problem is not the verdict'

Under Spanish law, a rape conviction can only take place if there is evidence of violence or intimidation.

"The problem is not the verdict, it's the criminal code," said Monserrat Comas of Catalonia's progressive Judges for Democracy association. "The facts are especially horrendous because we are talking about a 14-year-old minor."

Barcelona Mayor Ada Colau said the judicial system needs to recognize that women must give explicit consent in order for it not to constitute rape.

"I am not a judge and I do not know how many years in prison they deserve," she said in a tweet. "What I do know is that it is not abuse, it is rape."

The verdict was reminiscent of another ruling last year in the case of the so-called "Wolf Pack" gang rape. Judges had initially ruled that the five men had not raped the 18-year-old victim and instead found them guilty of sexual abuse, a lesser charge.

The verdict triggered mass protests across the country. Spain's Supreme Court later re-qualified the charges, sentencing each of the men to 15 years in prison.

Read more: Why are sexual assaults in Bavaria on the rise?

Prosecutors in the city of Duisburg have brought charges against three youths for the gang rape of an 18-year-old woman in July. Two other boys, aged 12, were too young to be charged. (10.10.2019)