At 2016's world-famous San Fermin festival in Pamplona, an 18-year-old was found half naked and crying. A court's decision not to charge a group of men with rape has sparked protests. 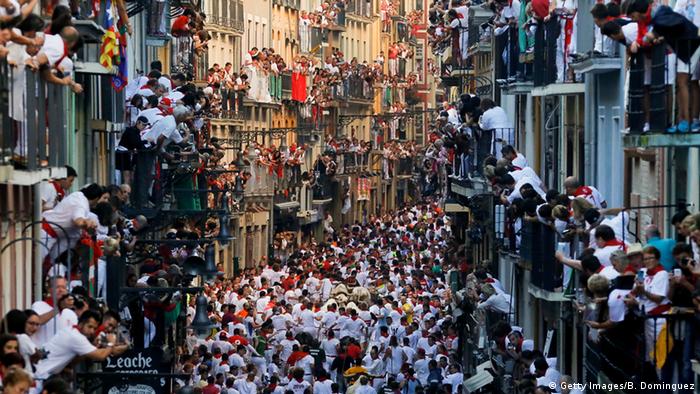 A Spanish court on Thursday sentenced five men to nine years in jail for "sexual abuse" instead of the more serious charge of rape for their role in a 2016 incident at Pamplona's running of the bulls festival.

The fact the men were cleared of gang rape sparked major protests in Spain and condemnation of "patriarchal justice." 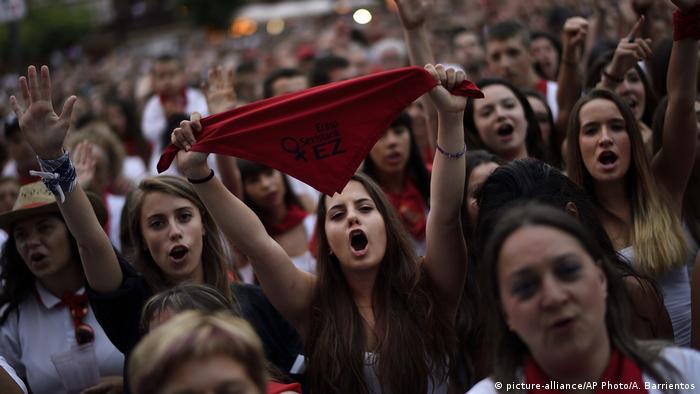 The decision sparked immediate condemnation, with demonstrators assembling outside the court and wider protests planned for later in the evening.

"I am outraged that after a gang rape you must suffer the violence of patriarchal justice," Barcelona mayor Ada Colau said in a Twitter message addressed to the victim.

Spain's Deputy Prime Minister Soraya Saenz de Santamaria said the judges' decision should be respected, but that authorities must analyse what happened "to avoid such behaviour happening again in this country."

Former Secretary of State for Equality Soledad Murillo wrote in El Pais newspaper: "If five people surrounding a girl is not aggression, the question has to be what is wrong with our criminal code?"

National Police also shared their support support for the victim, saying in a Tweet: "No is no - we are with you."

Read more: More than a quarter of Europeans say rape can be justified

Increasing problem: The case sparked outrage in 2016 amid concerns over increased reports of sex attacks at the annual festival the mistreatment of women in general. The ruling is unlikely to mitigate that anger.

What is Spain's "sexual abuse" charge? The charge is normally used in cases of sexual activity between underage partners and those who are regarded as unable to consent to sexual contact, including people who are severely handicapped or under the influence of drugs or alcohol.

What is San Fermin festival? The festival is a week-long party in the province of Navarre, drawing tens of thousands of tourists. It is most famous for its Running of the Bulls event but is well known for its drinking and revelry at the huge street parties, processions and firework displays.

Both sides to appeal: The prosecution, who asked for 20 years, and the defense have both announced they will appeal the decision.