After struggling with her own trauma, Wangu Kanja now helps women in Africa pursue perpetrators of sexual violence. Some at the Religions for Peace gathering even hope the new rape kit could even be preventative. 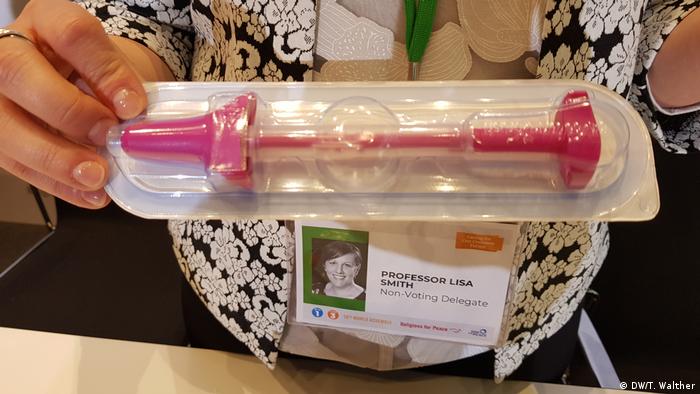 It was 10 p.m. when Wangu Kanja was raped. She and some friends were driving through the Kenyan capital Nairobi when four armed men suddenly approached the vehicle, opened the car doors, threatened the group and then climbed in. They drove through the city until they reached a cash machine. Two of the men got out and used the credit cards they had stolen to withdraw money. The men let Wangu Kanjas friends go; she alone was held back. One of the men then sexually abused her.

The rape took place in 2002, when she was 27 years old. And she suffered from for a long time after. She began to drink. She fell into depression. She didn't know how to deal with her trauma. Then, three years later, she made a decision: "I wanted to help others who had experienced the same thing."

And so Kanja founded a non-governmental organization for the victims of sexual assault in Kenya.

Many unreported cases of sexual violence

Rape has occurred throughout history, with large-scale perpetration during times of war. In many recent conflicts, rape has turned into a strategic weapon. It has been used as a tool to achieve specific military goals in the Bosnian War of the mid 90s, during the Democratic Republic of Congo's civil wars in the mid-late 90s, and more recently during the conflict in Syria and Iraq, where Yazidi women were particularly targeted. 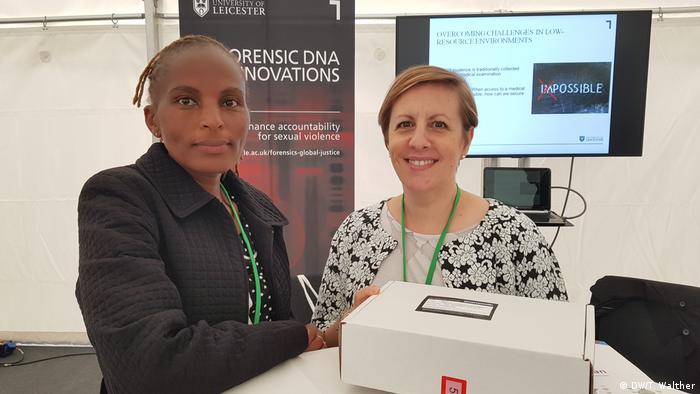 But in many African countries, sexual violence is also a widespread, daily occurence. USAID, the US government's international development agency, estimates that one in seven women in Kenya experience sexual violence at least once in their lives. In neighboring Tanzania, the World Bank estimates that nearly every third woman between the ages of 15 and 49 was the victim of sexual or physical violence in in the last twelve months.

However, many more cases go unreported out of fear — or perpetrators are not convicted due to insufficient evidence.

Kanja wants to change this.

Sexual violence as weapon of war

At the Religions for Peace 10th World Assembly, she is standing in a tent in front of the international convention center in the city of Lindau, on the banks of Lake Constance, in southern Germany. Kanja is telling some of the delegates, representatives of different religions from around the world, about her work.

She's not alone; Next to her is criminologist Lisa Smith from the UK's University of Leicester. Together, the two women developed a DNA collection method that makes evidence gathering easier, which could lead to more rape convictions of rape. The DNA sample can be taken by the victims themselves, sparing them the usual doctor's visit, which should make the evidence-gathering process more accessible.

According to Smith, their method is also significantly more affordable than the current common offerings.

Covering where they are no hospitals

Smith opens a case containing medical instruments and explains how the various test procedures work. "If the women have been orally raped, they can use this cotton swab to take a sample from their mouth, and they can do this up to three days after the incident."

The kit also includes a small plastic tube that women can use to collect DNA traces from the vagina.

Starting at the end of the year, aid workers in Kenya are supposed to distribute the kit in various regions, especially in rural areas where there are no hospitals.

Some conference delegates, who are there to help promote world peace through inter-religious dialogue, are skeptical: "What does this have to do with religion?" one asks.

Kanja explains that it is precisely religious representatives whom they want to reach. They in turn have a direct line to the grassroots of society and are urged to use their authority to increase awareness for the victims of sexual violence.

"Furthermore, the church is often where a person who has been raped goes to look for help and support," Kanja says. 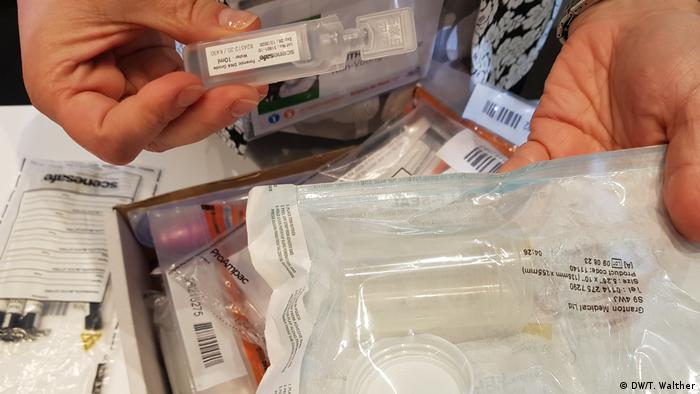 The kits include various instruments and containers

Wolfgang Schürer, one of then event organizers of this year's Religions for Peace assembly, is convinced by the concept and has great hope for it. "If word gets around that such a procedure exists, then its sheer existence … could have a preventative effect."

He thinks this could significantly reduce the number of sexual attacks. "If we can contribute to this, then this 10th world assembly will have been worth it, for this one project alone," he adds.

Kanja's goal is clear: She hopes that one day, sexual violence will cease to exist in her country. She also says that victims should have the chance to press charges so that the perpetrators can be criminally pursued.

"And I want to found an institution where people can go to heal from all the injustice inflicted upon them."

Kanja knows that after rape, it's not just the body that needs to heal. Above all, it's one's own self-worth that must be rebuilt.

The Christian church: Dying out or thriving like never before?

In Germany priests often preach to empty church benches while in Zambia, Christian churches play a leading role in society. At the Religions for Peace World Assembly, Tessa Walther explores the root of these differences. (21.08.2019)

Religions for Peace's Vendley talks to DW in Lindau