During a state visit to China, French Premier Raffarin threw support behind a law allowing China to attack Taiwan and continued to push for a lift of the EU arms embargo. 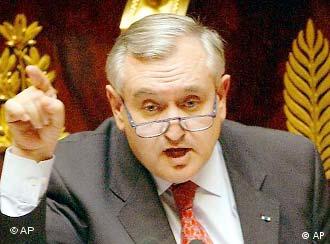 In Beijing, Raffarin supported a controversial stance on Taiwan

At the outset of a three-day visit to China, French Prime Minister Jean-Pierre Raffarin said he supported Beijing's "anti-secession" law on Taiwan, and vowed to keep pushing for an end to an EU arms embargo that could open the door for Paris to sell weapons to the Asian giant.

Appearing to put his government at odds with the European Union, Raffarin said at the outset of the three day visit that Paris had no objections to the anti-secession law. 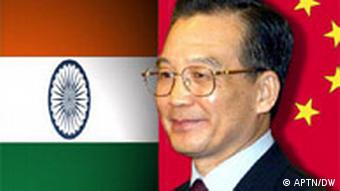 "The anti-secession law is completely compatible with the position of France," he said in a joint press conference with his Chinese counterpart Wen Jiabao (photo).

At the same time, he vowed that his government would continue to push for the lifting of what he called the "anachronistic" and "discriminatory" arms embargo against China. The embargo contradicts the current "strategic partnership" between the EU and China, he added.

During his visit to Beijing on Thursday, China Eastern Airlines and Shenzhen Airlines signed a deal with the European consortium Airbus to buy a total of 10 A319/A320 planes. And China Southern completed an agreement on its purchase of five A380 super jumbos.

The deals were signed between the carriers and the European consortium's vice-president, Philippe Delmas, who is in China accompanying Raffarin on his visit.

In talking to news agencies, Delmas said the deals were "not letters of intent, but firm contracts." China is responsible for one-sixth of Airbus's annual deliveries, he noted.

France has lobbied hard for Airbus sales in China, and its close political ties with Beijing appear to have helped smooth the way for the deals.

Ahead of the visit, Raffarin had stressed his commitment to push the EU to lift its 16-year-old EU arms embargo against China by the end of June. In an interview with China's Xinhua news agency Wednesday, Raffarin reiterated the EU's decision, taken at a summit in December, to work toward lifting the arms embargo by late June.

He added that the decision should be Europe's alone, and noted that Europe is working to convince Washington of its position.

"France continues to require the lifting of the embargo and does not see what could lead the European Council to change its position on the subject," Raffarin said Thursday in a joint press conference with Wen.

The airplane deals penned Thursday are estimated to be worth some $500 million to $600 million, Airbus said. 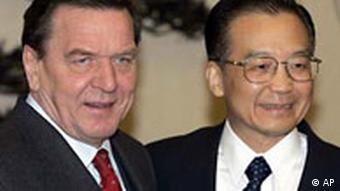 Schröder and Wen also got Airbus contracts rolling, in 2004

Some 20 other previously announced contracts were also finalized during the ceremony. Taken together, the value of the deals comes to around $3.2 billion, Delmas said.

"This is a very big market ... in the first four months of the year it grew by 40 percent over the same period last year," Delmas told news agencies.

US, EU on Collision Course Over China

Two senior members of the United States Congress warned the European Union this week that the lifting of the 15-year arms embargo on China could result in a halt of US sales in military technology to the EU. (March 3, 2005)

The US wants it, the EU wants it gone. The fight over the weapons embargo against China has smoldered for weeks. The fact is that European firms already deliver weapons to China -- as do American ones. (March 16, 2005)

While France and Germany lead a group of EU countries intent on ending the arms embargo on China, some are becoming nervous due to Chinese moves against Taiwan and increasing US pressure. (March 24, 2005)

During talks in Washington, US and EU officials said it was important to maintain close contact to deal with "competition and systemic rivalry with China."