After medieval cathedrals and baroque palaces, a rather unusual candidate in Germany makes it to the UNESCO list of world heritage sites- a former mine called the “Zollverein” in the German Ruhr valley industrial region. 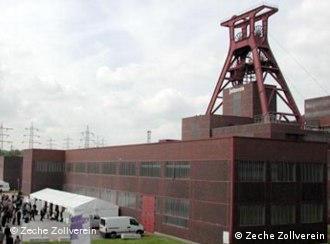 It’s a proud moment for the city of Essen. The UNESCO has elevated its monumental "Zollverein", a Bauhaus-style mining complex built in the 1930s, to the status of a world heritage site.

For decades it was considered to be a model for industrial architecture. The mine that was closed in 1986 is a relic of Essen’s mining past, one that powered the German post-war economic miracle.

At a conference in Helsinki last week, the UNESCO commission explained its decision to recognize the mine as a world heritage site by describing it as an "extraordinary industrial monument" and "an icon of industrial culture".

The German UNESCO commission said in Bonn that the mine is a "representative example of the development of heavy industry in Europe -the most beautiful coal pit of the bubbling Ruhr pot".

The gigantic "Zollverein" is the 25th German cultural monument to be added to the list of world heritage sites drawn up by the UNESCO. The state of Northrhine Westphalia bought the mine 15 years ago after it was closed down, placed it under the German monument protection and preservation act and restored it.

Magnet for the trendy and creative

In the 1990s the abandoned ware house-like character of the pithead attracted the young and creative -several media, culture and advertising companies set up their offices here. The design and choreography center of Northrhine Westphalia also moved here.

Today the defunct industrial building houses a museum on the history of mining. It is also home to the world’s largest collection of contemporary design. The coking plant, which barely escaped being torn down 15 years ago, today houses spectacular studios for artists.

"The most beautiful mine in the world", "The Cologne cathedral of the Ruhr region" – there’s never been a lack of superlatives for the "Zollverein" in the past. And now experts feel that the industrial complex with the mean steel scaffolding has finally earned the title it has long deserved.

The decision of the UNESCO has been welcomed with enthusiasm. The State Premier of Northrhine Westphalia said it was a "great honor for the world’s most beautiful mine". The head of the "Zollverein", Stefan Schwarz spoke of a "fantastic honor for the entire industrial development in the entire Ruhr region."

A boost for the region's image

Though the acceptance of the mine in the world heritage list doesn’t translate into any kind of financial benefit for maintaining the structure, the title has other advantages.

There’s no doubt that the recognition of the "Zollverein" as a world heritage site will do wonders for the image of the entire Ruhr region with its trademark industrial culture. The remnant of the era of steel and mining is now being mentioned in the same breath as say the Taj Mahal or the pyramids of Giza.

It’s also hoped that the prestigious title of "world heritage site" will lure more tourists and investors to the region.

Since 1972, the UNESCO has been annually adding cities, buildings, archaeological treasures, cultural monuments and natural habitat to its list of world heritage sites.

The list now includes more than 721 sites and ranges from the Serengeti National Park in Tanzania to the Statue of Liberty in New York. The first site in Germany to be included in the revered list was the cathedral in Aachen

City of Essen and its mining past