Can feeding insects to animals shake up farming as we know it?

A new generation of agricultural entrepreneurs in Kenya are using the larvae of black soldier flies as a sustainable alternative to fishmeal and soy. Could it take off internationally? 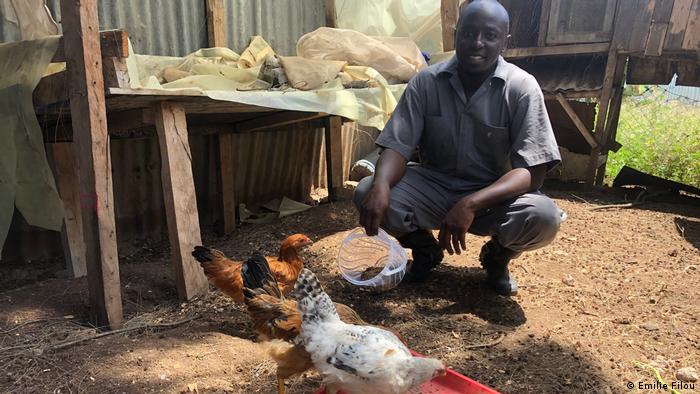 You won't find vegetables inside Frederick Kimathi Githua's greenhouse. Instead it houses stacks of trays full of yellowish larvae and netted cages of black wasp-like insects.

Githua farms black soldier fly (BSF) on his urban small holding in the Kenyan capital, Nairobi. Twice a week he feeds their larvae to his chickens and pigs, supplementing their normal diet of market waste.

"They love it," he says. "The chickens don't even run; they just wait when I come out with the larvae."

Last October Githua began documenting his experiments in how to rear, feed and process his larvae on YouTube and Facebook. Since then he has gained an international following and can't keep up with orders from farmers for his BSF egg starter kits.

"We've had people calling us from Nigeria, Ghana, the Ivory Coast, Italy," he says. "I've never been prouder."

Githua is one of 1,300 farmers and entrepreneurs in Kenyan to learn how to set up BSF production with the International Centre of Insect Physiology and Ecology (ICIPE), a research institute headquartered in Kenya that wants to use insects to improve life for people in the tropics. 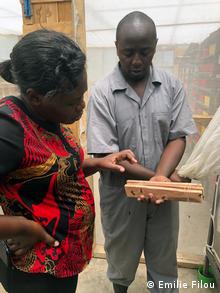 Frederick Kimathi Githua is one of 1,300 farmers and entrepreneurs in Kenya working with BSF

ICIPE has been working since 2015 on BSF as an alternative to fishmeal and soy — the main sources of protein used in animal feed — which both have significant impacts on the environment.

Recent research shows roughly a fifth of the soy exported to the EU from Brazil's Amazon and Cerrado regions may be coming from land that has been deforested.

As for fishmeal, 20% of global wild catch goes into feeding other animals. With a third of fishing stocks pushed beyond sustainable limits, an alternative is urgently required.

BSF has a lower environmental impact, according to ICIPE, because it can feed on a variety of waste products, grows quickly, contains high levels of protein and can be raised locally in vertical farms. Insects also generally have a higher food conversion rate than conventional sources of animal protein.

Charles Mwendia, CEO of Treasure Feeds, started replacing fishmeal with BSF in his poultry and pig feeds five years ago because of quality inconsistencies with omena, a small fish used as fishmeal in Kenya often mixed with other ingredients. Other protein sources such as soy, cotton seed cake or sunflower seed cake are all imported.

"BSF is the first local source of protein," Mwendia says, pointing to an increasingly important consideration at a time when the coronavirus pandemic has exposed the fragility of international supply chains.

Still, the sheer volume required in Kenya's feed sector ⁠— some 180,000 tons of protein a year — means ICIPE and other BSF producers face a huge challenge if they want to compete, says Chrysantus Tanga, ICIPE's lead scientist on BSF. Half of the current feed market is made up of animal protein, the other by vegetable protein such as soy.

"[Animal protein] is the segment we're trying to replace," Tanga says. Replacing just 15% of it would take 13,500 metric tons per year. Tanga says even large producers only produce 1,000-2,000 tons per year and it takes time to build a colony large enough to sustain these production levels. 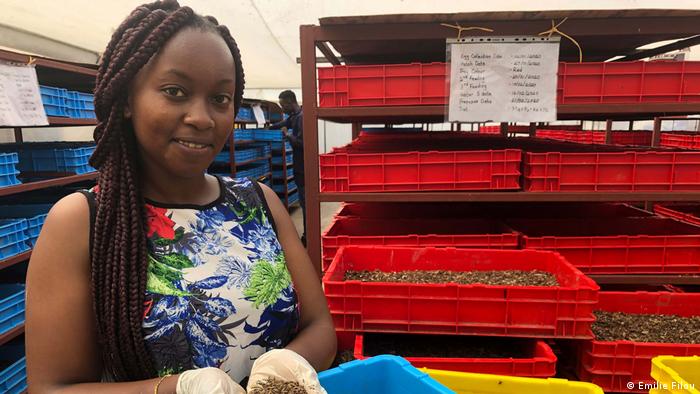 Maryann Wanga says one of the challenges is convincing older farmers to move away from conventional feed.

"You know the older generation, they call the larvae 'worms,'" she says. "We have to do a lot of explaining and convince them that it's working."

Insect Research, also based in Kenya, keeps its own poultry and pigs to show farmers how their product works and says its BSF-fed pigs reach market weight a month earlier than standard fed counterparts, reducing feed costs by 15%.

Discovering that BSF, which can be fed either live directly to animals or dried as part of formulated feeds, was about 40% cheaper than fishmeal but comparable in terms of nutrition, Mungai decided to investigate further.

Since starting 18 months ago, the company is now producing 4 tons of fresh larvae each month. Inside Insect Research's greenhouse in row upon row of brightly colored trays, BSF larvae are fattening up on a mixture of potato waste, spent grain and pig manure. The adult flies are kept in large netted cages where they lay their eggs.

Kenya is not the only country where BSF is catching on. Companies in North America, Europe and South Africa have raised millions of dollars in the last few years to build commercial-scale production facilities, according to Beyhan de Jong, an analyst at Dutch financial services company Rabobank.

Is it actually sustainable?

Yet she adds production is still limited and scale-up is restricted by high start-up costs. Even in places like Kenya where labor is cheaper and the tropical climate means lower energy requirements, equipment such as driers to process larvae are expensive. 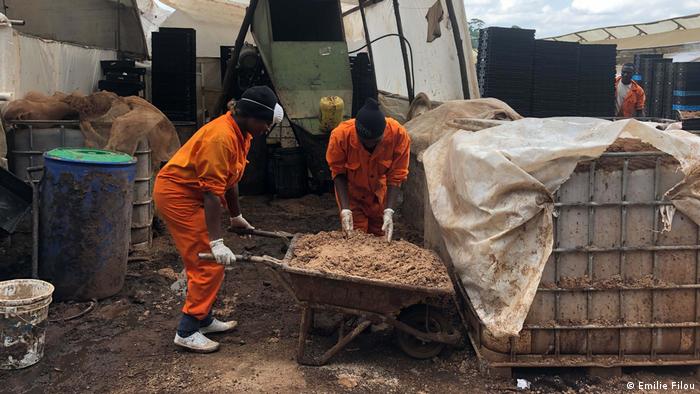 Large companies such as InsectIPro produce 1,000-2,000 tons of feed per year.

Some are also skeptical about its sustainability.

"It doesn't seem a logical solution to me to feed one animal to feed another animal," says Brett Glencross, senior nutritionist at the Institute of Aquaculture at the University of Stirling in Scotland.

"The best option in new technology is single cell protein bacteria because they are not competing with our food chain," he says. "Bacteria do not use protein to make protein: they make it new. Only bacteria and plants can do that." Protein bacteria can be fed to fish, livestock and pets.

BSF proponents say regulation is also an issue. The sector is now lobbying in Kenya to make it easier to obtain required licenses.

Yet BSF scientist Tanga says there are grounds for optimism: "We established a standard [for BSF in animal feed] for Kenya and Uganda. It is the first in Africa. Before it was accepted, insects in feed were considered a contaminant! We have come a long way."