Tens of thousands of people have been evacuated in Germany and the Czech Republic as flood waters continue to rise. East Germany is still bracing for the worst with the river Elbe expected to crest on Thursday. 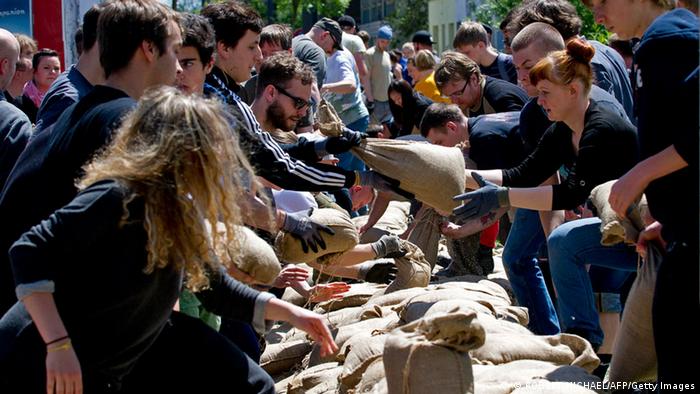 Large swathes of eastern Germany and the Czech Republic remained under water on Thursday, with authorities warning the worst was yet to come.

In Germany, fears are centered on the eastern city of Halle in Saxony-Anhalt where the Elbe tributary, the Saale, has reached its highest level in 400 years. Authorities used loudspeakers on Wednesday to urge 30,000 residents to leave their homes after the center of the city found itself under more than a meter of water.

As Germany battles severe flooding in parts of the country, the cost of the damage is hitting Europe's biggest economy just as it has barely overcome a harsh winter that has driven it to the brink of recession. (04.06.2013)

In the neighboring state of Saxony, the city of Dresden saw the Elbe running around 7 meters above normal levels on Wednesday, with the crest expected to arrive in the early hours of Thursday morning. Hundreds of the city's residents had already fled their homes. Nevertheless the city's spokesman said defenses, put in place after catastrophic flooding in the region in 2002, were still effective.

"The flood preparations since the 'century floods' of 2002 are working," Kai Schulz said. "Still, areas to the east of the city are under water."

Evacuations have also taken place in the northern states of Schleswig-Holstein, Lower Saxony, Mecklenburg-Western Pomerania and the eastern state of Brandenburg, where the Elbe is swelling to record levels.

In Bavaria the town of Deggendorf saw two levees break along the Danube and Isar rivers prompting 6,000 evacuations as waters engulfed nearby houses.

"We have to expect the very worst," Till Backhaus, environment minister of Mecklenburg-Western Pomerania state, said on Wednesday.

"We have to be ready for a highly difficult and complex situation," he told news agency DPA.

In northern regions of the Czech Republic, meanwhile, the river Elbe was expected to reach 11 meters (36 feet) in the early hours of Thursday morning, almost four times its usual height. Firefighters said at least 19,000 people had been evacuated nationwide.

Eight cities and districts across Germany have declared states of emergency over the last few days. Thousands of volunteers have joined an estimated 40,000 firefighters and 5,000 soldiers, including hundreds of troops from France and Holland, in efforts to fill sandbags, reinforce levees and build elevated walkways to flooded homes.

The southern German city of Passau bore the brunt of the flooding earlier this week.The Bavarian city saw water levels of 12.89 meters on the Danube river, the worst in roughly 500 years. Water levels in Passau have since receded.

On Tuesday German Chancellor Angela Merkel paid a visit to the region and pledged an initial fund of 100 million euros ($130.7 million) to aid recovery efforts in the region and other flood-hit areas.