The global economic recovery is being held back by the ongoing COVID pandemic. However, the mutating coronavirus is just one of the main risks which could dampen investor spirits in the coming year. 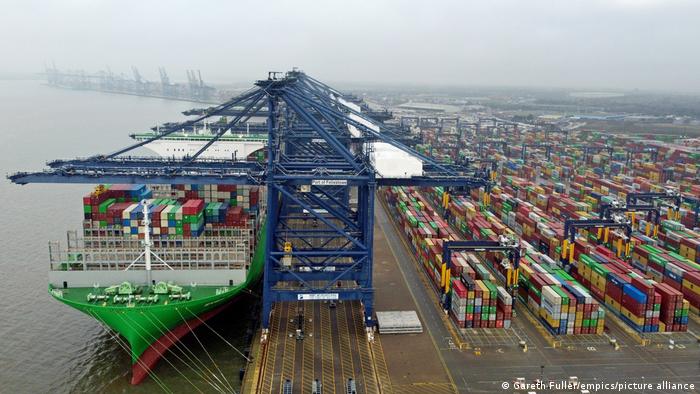 The global economy recovered strongly in 2021 from its pandemic lows, only to lose some of its steam in the second half thanks to fresh pandemic outbreaks, supply chain bottlenecks, labor shortages and a slow rollout of COVID-19 vaccines, especially in low-income developing countries.

The slowing recovery prompted economists at the International Monetary Fund (IMF) and the 38-member Organization for Economic Cooperation and Development (OECD) to slightly trim their global growth forecasts for the year in October and December respectively.

They, however, maintained their outlook for 2022 but warned that COVID variants could derail growth. They stressed the need to swiftly vaccinate a vast majority of the global population.

While the pandemic remains a big risk to global growth, it's not the only threat that is likely to keep investors on their toes in 2022.

Over the next week, global markets kept seesawing as investors struggled to judge the economic implications of the new variant. Governments have been tightening up restrictions to keep the variant at bay, threatening the economic recovery.

Initial evidence, though little, and expert commentaries suggested omicron, while more transmissible than the delta variant, wouldn't be as deadly as its predecessor and wouldn't evade the immunity produced by existing vaccines or treatments. As scientists continue to analyze the data, JP Morgan strategists have said if omicron is found to be "less deadly" then it might eventually end up accelerating the end of the pandemic.

It's possible that omicron might not be the curveball to throw the economic recovery off track, but a future variant could potentially be one such risk. Experts have been warning that if the pandemic is allowed to rage then we could see the emergence of vaccine-resistant COVID variants, which could mark a return of lockdowns.

"If COVID-19 were to have a prolonged impact — into the medium term — it could reduce global GDP by a cumulative $5.3 trillion (€4.6 trillion) over the next five years relative to our current projection," IMF Chief Economist Gita Gopinath said in October.

Supply chain disruptions have played a key role in stalling global recovery this year. Shipping snarls along with a shortage of shipping containers, and a steep rebound in demand once pandemic-related restrictions were eased, have left producers scampering for components and raw materials.

The auto sector has been among the worst-hit, with production tumbling in the eurozone, including in Germany, in recent months. Carmakers have cut production as intermediate equipment, especially semiconductors, remain in short supply.

While there are signs that supply shortages are easing with a drop in shipping costs and a rise in chip exports, experts expect the supply bottlenecks to continue weighing on growth well into next year.

"We expect that the situation will not ease in 2022 — and not before new relevant ocean transportation capacities are deployed in 2023 or supply chains are adapted to nearshoring," Frank Sobotka, managing director at transport and logistics firm DSV Air & Sea Germany, told DW, referring to the practice of transferring a business operation back to a nearby country.

The raw material and input shortages, along with higher energy prices, have pushed inflation in the eurozone and the United States to multiyear highs. This has spooked global investors who fear that central banks would be forced to prematurely raise interest rates to tame soaring prices.

The European Central Bank has maintained that prices have been pushed up by temporary factors such as supply shortages, higher energy prices and base effects. It expects inflation to cool once the effects of global demand-supply imbalances subside.

With supply chain disruptions proving to be more persistent than earlier thought, inflation is expected to continue running hot for most of 2022, keeping European central bankers in a tight spot.

In the US, inflation concerns are expected to be even greater, propped up by rapid economic recovery, a massive fiscal stimulus and labor and supply shortages. The Federal Reserve has said it would be tapering its bond-buying stimulus plan more quickly and has signaled interest rate hikes in 2022. A Fed rate hike could spell trouble for some emerging economies, including South Africa, Argentina and Turkey, which could see a flight of capital.

A slowdown in China, the world's second-largest economy, would certainly add to investor worries in 2022.

The Asian economic powerhouse helped the world emerge out of the pandemic-induced recession in 2020 riding on global demand for its electronic and medical goods. It was the only major economy to grow in 2020 and is expected to expand by around 8% this year, making it the fastest-growing major economy after India.

However, the post-pandemic recovery is being stymied by Beijing's crackdown on its tech titans, including Alibaba and Tencent, highly indebted real estate firms such as Evergrande and Kaisa, and the private education industry. Top Chinese officials have sought to calm nerves by saying that stabilizing the economy would be their top priority for next year, prompting expectations of a fiscal stimulus in early 2022.

Beijing's reluctance to drop its "zero-COVID" stance, which has kept the country isolated for more than a year and has led to draconian restrictions following the emergence of even a single COVID case, would remain a big risk for the global economy.

Even as temperatures drop in the Northern Hemisphere, they have been rising as far as relations between Russia and the US and European allies are concerned. Washington has warned Moscow against invading Ukraine amid a massive Russian troop buildup on the Ukrainian border.

The US and European allies are weighing more economic sanctions against Russia, including stopping the controversial Nord Stream 2 gas pipeline, should it invade its neighbor.

"US-Russia tensions are a huge risk that could increasingly have the Eastern NATO allies on the cusp of war," Edward Moya, senior market analyst at OANDA trading group, told DW. "If the US and Europe halt the Nord Stream 2 pipeline, that could lead to a global energy crisis that sends oil costs towards $100 a barrel...Surging energy prices could be the straw that forces central bankers globally to accelerate tightening monetary policy."

US-China relations have also been tense over Taiwan, with Washington warning Beijing against unilaterally changing the status quo over the island territory.

Washington has further irked Beijing with its announcement that US officials will boycott the Beijing Winter Olympics in February over China's human rights "atrocities." China has threatened that the US would "pay a price" for its decision.