Ukraine on Tuesday said the first delivery of German howitzers and other heavy weapons had arrived. Meanwhile, the government in Berlin published a complete list of military aid sent or pledged to Kyiv. 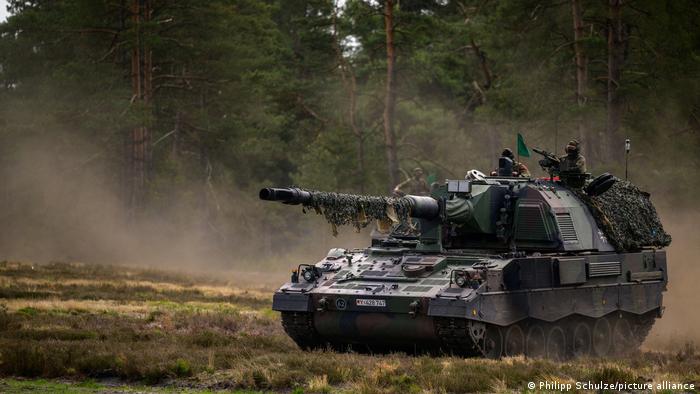 The first delivery of heavy weapons promised by the German government had arrived in Ukraine, Ukrainian Defense Minister Oleksii Reznikov said on Tuesday.

The arrival comes after repeated appeals from Kyiv for better weapons and ammunition as it seeks to hold off Russia's military offensive in eastern Ukraine.

Self-propelled howitzers, the Panzerhaubitze 2000, are the first heavy weapons sent by Germany to arrive in Ukraine.

In May, Berlin pledged to send seven of the artillery systems, adding to five howitzers promised by the Netherlands.

The Panzerhaubitze 2000 are some of the most powerful artillery weapons in the German military's stock. The howitzers can hit targets located up to 40 kilometers (25 miles) away.

"Panzerhaubitze 2000 are finally part of 155 mm howitzer arsenal of the Ukrainian artillery," Reznikov wrote on Twitter.

He called the delivery "an example of international cooperation in support of Ukraine."

What else has Germany sent?

As the self-propelled howitzers arrived in Ukraine, the German government published its first full list showing both the equipment it said it had already sent to Ukraine, and items it had pledged that were still being arranged.

In addition to the recent delivery of seven howitzers, the German Defense Ministry said it had sent 14,900 anti-tank mines, 500 STINGER air-defense missiles and 2,700 anti-aircraft missiles.

In addition, Germany had supplied Ukraine with 16 million rounds of ammunition for handguns, as well as 100,000 hand grenades, to name only some of the most notable entries on the list.

Under nonlethal supplies, Germany has already provided materials including, but not limited to, 175 vehicles (including trucks, buses and off-road vehicles),  23,000 combat helmets, 10,000 sleeping bags, 1,200 hospital beds and 100 tents.

The government's list also included weapons and ammunition that the Germany has pledged to Ukraine, but are in the process of being delivered.

Russia's invasion of Ukraine at the end of February prompted urgent appeals for military aid.

German Chancellor Olaf Scholz's government has made a major turnaround with Berlin's historic opposition to sending lethal weapons to active conflict zones, but has been criticized for not doing so more quickly.

Berlin was initially hesitant to pledge heavy weapons deliveries, at first offering to send nonlethal supplies such as combat helmets.

Following the German government's policy reversal and pledge to support Ukraine with more modern weapons systems, Ukraine repeatedly complained about the amount of time it took for the weapons to arrive.

The German government defended the delays by saying it needed to ensure that Ukrainian troops received training on the new weapons systems, and that defense industry protocols needed to be radically changed to accommodate the deliveries.

Ukraine's government has appealed to Western allies for more weapons to bolster its Soviet-era arsenal. Kyiv said it would need 1,000 howitzers, 500 tanks and 1,000 drones to help stave off Russian troops.

Scholz told members if his Social Democratic Party (SPD) that the decision to supply German weapons to Ukraine was the right decision.

"This is necessary now," Scholz said. "It was the right thing to decide now and in this situation."

He also told lawmakers that the German public supported the decision.

Scholz said that Russia must end the war and stressed Ukraine's right to exist.

"Everything we do is aimed at that," he said.