Filipinos resist China-funded dams amid Beijing′s growing clout in Southeast Asia | Asia | An in-depth look at news from across the continent | DW | 14.03.2018

Filipinos have rallied at the Chinese Embassy in Manila to protest against two Beijing-funded dam projects that they say will occupy land, destroy environment and incur massive foreign debt on the Philippine government. 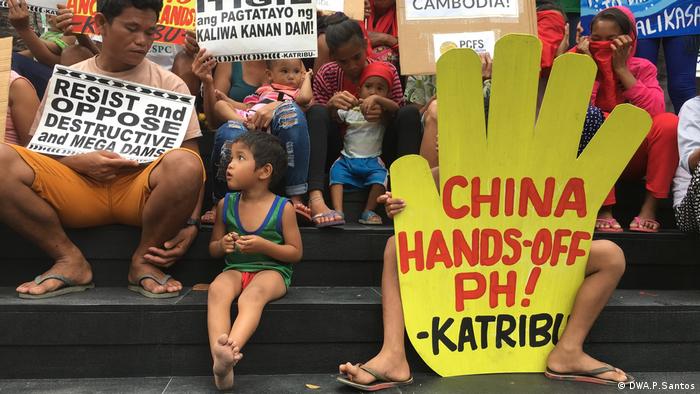 The New Centennial Water Source Project (NCWSP) in Quezon, some 210 kilometers south of Manila, is touted as a grand project that will meet the increasing water demands of the Southeast Asian country and ease Manila's reliance on its main water source, the aging Angat Dam.

But activists say the new dam's construction and operations could displace at least 14,000 indigenous Dumagat and Remontados families.

On the other hand, the Balog Balog Multipurpose Project in Tarlac, 129 kilometers north of the capital, could have adverse effects on 29 villages and displace at least 1,650 mostly indigenous Aeta families.

Both projects have suffered various delays, with Balog Balog starting more than five decades ago.

"These dam projects infringe on the rights of the indigenous communities. It will destroy mountains and adversely impact the environment. It will aggravate flood risks and endanger local communities," Clemente Bautista, international coordinator for the Kalikasan People's Network for the Environment, told DW.

"On top of it, the construction of these mega dams is funded by high interest loans from China that will drag the country into deeper poverty," Bautista added.

But the Philippine government says the bulk of the funding for the two dams will come from tax revenues, with only about 15 percent coming from official development assistance from foreign donors like China and Japan as well as international organizations such as the World Bank. 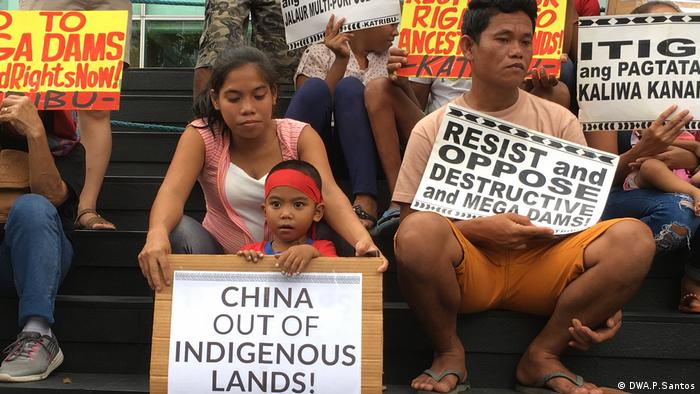 Since coming to power in 2016, Philippine President Rodrigo Duterte has forged closer ties with China, unlike his predecessors. He has reportedly won pledges worth billions of dollars from China, which has supported his controversial war on drugs  and sought to deepen economic ties.

During a trip to Beijing for the Belt and Road Forum last year, Duterte's much-softened approach to Chinese territorial claims in the South China Sea earned billions of dollars of investment for the country. The two countries signed four agreements, including free infrastructure projects, feasibility studies for further infrastructure projects, memorandums of understanding on cooperation in human resources development and personnel exchanges, energy cooperation, and the enhancement of government capabilities in communication and publishing.

Philippine economists are wary of deepening economic ties between Beijing and Manila due to China's track record of "debt-trap diplomacy."

"The government should diversify its foreign loans. Also, borrowing money from China would be synonymous with compromising on our territories and natural resources in what we call the West Philippine Sea [South China Sea]," J.C. Punongbayan, a lecturer at the University of the Philippines School of Economics, told DW.

"We mustn't give up our interests in return for a few billion dollars worth of loans," Punongbayan added. 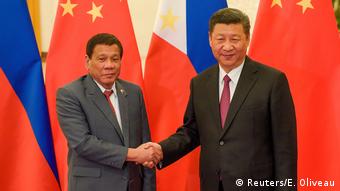 Since coming to power in 2016, Philippine President Duterte has forged closer ties with China

"We must keep in mind that China extends massive infrastructure loans to developing countries worldwide in a bid to expand its economic and political reach. Funding dams is part of Beijing's strategic goals. The Philippines is getting a taste of China's hydro-diplomacy," underlined Punongbayan.

"The Build, Build, Build program is the centerpiece of the Duterte administration's economic policy to reduce poverty from 21.6 percent to 14 percent by 2022 and uplift the lives of more than six million Filipinos," Grace Karen Singson, the undersecretary for the department of finance, said last year in an economic forum.

Although Kakay Tolentino of the Bai Indigenous Women's Network acknowledged the advantages of the two dams, she also insisted that Chinese funding was not the answer.

"It would be better to build small community-managed dams and energy projects. This will protect the rights of indigenous communities and preserve their ownership of ancestral lands," Tolentino told DW.

Arnel Delos Santos, general secretary of Balatik, a group representing indigenous peoples based in the area where part of the New Centennial Dam is being built, says their ancestral land is both a source of life and livelihood for them. "We are calling for an immediate stop to the construction of this dam," Delos Santos told DW.

Duterte's embarrassing to and fro on South China Sea