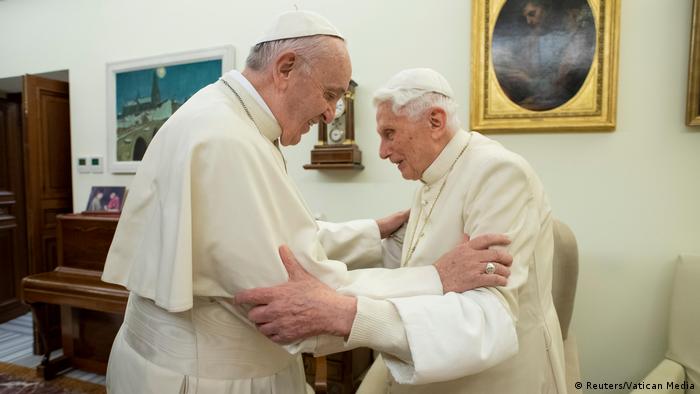 Retired Pope Benedict XVI on Tuesday backtracked on comments published on Sunday that were widely seen as critical of the current pope's stance on priestly celibacy rules.

The unprecedented comments were published by French newspaper Le Figaro on Sunday as part of a preview of an unpublished book that Benedict had apparently co-authored with conservative Guinean Cardinal Robert Sarah.

Now his personal secretary has said that Benedict never agreed to appear as the co-author of the book. Benedict apparently offered advice to Sarah and sent him an essay he had written on the topic of priestly celibacy, but nothing more.

"He never authorized any project for a co-authored book nor had he seen or authorized the cover," Benedict's personal secretary Georg Gänswein said, calling the incident a "misunderstanding" in which Sarah acted "in good faith."

Later he agreed that he would remove Benedict's name from the book, but the text would remain unchanged.

"Considering the polemics caused... it has been decided that the author of the book will be for future publications: Cardinal Sarah, with the contribution of Benedict XVI," he wrote on Twitter.

What did Benedict say?

In the book excerpt published on Sunday, Benedict had apparently reaffirmed the value of priestly celibacy, a position widely seen as critical of Pope Francis, who is currently deciding whether to allow married men in special circumstances to enter the priesthood.

The 92-year-old former pontiff stepped down in 2013, promising to remain "hidden from the world" and support the new pope. The comments caused controversy as they can be seen as an attempt to interfere at the Vatican, a highly unusual situation.

"Wounded by the revelation of so many scandals, disconcerted by the constant questioning of their consecrated celibacy, many priests are tempted by the thought of giving up and abandoning everything," Le Figaro cited Benedict as writing in Sarah's book From the Depths of Our Hearts: Priesthood, Celibacy and the Crisis of the Catholic Church.

The yet-to-be published book urges priests not to abandon their vow of celibacy.

The report of an October 2019 synod floated the idea that older married men in remote parts of the Amazon should be allowed to be ordained to address a shortage of priests in the region.

If accepted, the proposals would shake the Catholic Church to the core, as celibacy among priests is seen as fundamental to their role by Catholic conservatives.

Some believe the more progressive Pope Francis may attempt to remove celibacy as a requirement for all priests.

Benedict was the first pope in over 600 years to resign from the role. He has largely avoided the spotlight since then, in an effort to support his successor Francis.

Catholic women are demanding change in the church and giving Germany's bishops an earful as they meet in Fulda. The bishops are under pressure — from the progressive grassroots at home and from a reluctant Vatican. (23.09.2019)

This weekend, Pope Francis is meeting with individuals who were abused by members of Chile's Catholic clergy as children and teenagers. One of them told DW he hopes major reforms will follow this important encounter. (28.04.2018)

Pope Emeritus Benedict XVI has admitted to providing false testimony during an investigation into sexual abuse in Germany's Catholic Church.