Why has the Catholic Church taken so long to address child sexual abuse? | News and current affairs from Germany and around the world | DW | 11.12.2019

Why has the Catholic Church taken so long to confront child sexual abuse?

In a Conflict Zone interview in Rome, Father Hans Zollner told DW’s Tim Sebastian: "There are factors that make it difficult to change."

Zollner is the head of the Centre of Child Protection at the Pontifical Gregorian University in Rome, and was appointed by Pope Francis as a founding member of the Pontifical Commission for the Protection of Minors.

Why the Catholic Church had become a home "for deceivers, criminal priests or abusers," Sebastian asked.

"They have not had a home … they have to be taken to accountability and this is what is going to happen."

Sebastian pressed further asking Zollner if the church had given the predators an opportunity to continue to abuse.

"We have now instead established a system of accountability," Zollner said.

Why are the review boards established by the Catholic Church in the United States working in secrecy and in some cases undermining claims from victims, Sebastian asked.

Zollner pointed out that the boards were appointed by local bishops and included private individuals who volunteered to serve.

"These people have been chosen from among professionals."

"People who abuse children are sick and depraved, aren't they?" Sebastian asked.

Zollner agreed there was nothing hard to understand about Sebastian’s description of the perpetrators and said convicted priests were being dismissed.

In the case of Australian Cardinal George Pell, the church has insisted that he will only be stripped of his title after his final appeal has been heard by the country’s High Court.

"[Pell] does not have a final conviction. And that is what the Holy See has always said, we will wait until the final conviction will be said and then there will be consequences," Zollner said.

Sebastian asked what the German-born priest thought about having a convicted rapist in jail who was still a cardinal.

"I'm not happy at all about the situation and I hope that we will have clarity once the appeal court or the high court will ultimately define what will be the penalty or if there is any," Zollner said.

Tim Lennon,president of the Survivors Network of those Abused by Priests (SNAP), says Pell should have been immediately defrocked.

"If there is a conviction he will certainly be defrocked," Zollner said of Pell. 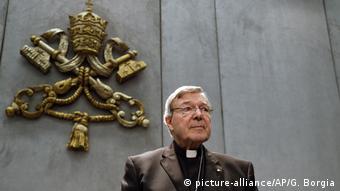 One victim, Peter Isley, who heads the group Ending Clergy Abuse, says the only way to solve the issue of abuse within the church is at the top.

Zollner defended Pope Francis’ efforts: “He has dismissed many priests, he has dismissed a number of bishops and he has established the Pontifical Commission for the Protection of Minors … and all this has happened over the last six years.” 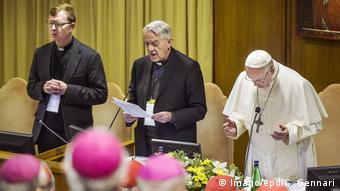 “Frankly, you've had decades to look at these issues,” Sebastian pointed out to Zollner, asking why the Catholic Church had not followed recommendations from the United Nations Committee on the Rights of the Child LINK.

In 2014, the U.N. body called on the Vatican to remove all child sex abusers from the church’s service.

Zollner said that was happening. Sebastian asked if that were the case why so many abusers were known but not removed. The Jesuit priest said the process included investigations and options for appeals.

The U.N. committee also condemned how the Catholic Church had imposed a “code of silence” on clergy that meant many cases were not referred to law enforcement. Sebastian asked if local bishops were now bringing the cases of abuse to light.

The papal commission founding member said that in some cases this was a matter of culture and that sexual abuse was not always as easily addressed in some countries.

“[In] African and Latin American countries as well as … Asian countries, this is not a topic that people talk about publicly. You don't speak about sexual misbehavior in the society of let's say Myanmar or easily South Africa. You don't do that,” He said.

Zollner also predicted the church would lift the principle of pontifical secret, which has been applied to abuse cases and used to prevent public scrutiny.

“I am pretty sure that … it is going to happen very soon,” Zollner said.

Sebastian noted that Zollner had strongly condemned the sexual abuse of children within the Catholic Church but asked why he sought to relativize it with the systematic abuse of children that had taken place in other institutions.

“Do you really think that sexual abuse in the church sounds less disgraceful if other people are doing it as well?” Sebastian asked.

“My first interest is that we do, as the Catholic Church, what is our responsibility and that we take our own field and that we clean it up,” Zollner said. 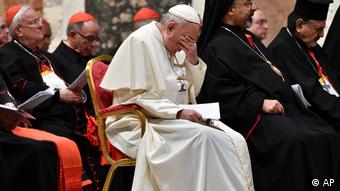 Sebastian pointed out that the church had a spiritual responsibility for the children it had been trusted with and who had nevertheless been abused.

“This is a double betrayal by priests,” Sebastian noted.

“Absolutely … This is one of my major points,” Zollner said.

Is the Catholic Church capable of being transparent and policing itself? Sebastian said this was increasingly in doubt.

Zollner called for more outside professionals and oversight.

Sebastian asked the father why he should go on if the church’s own efforts still did not seem trustworthy.

“We live in this church which is not a community of saints only. There are also sinners in it and criminals. So, this is the fact that you have to face reality. This is the reality of the church I work for and I'm in,” Zollner noted.

He went on to say that it was encouragement from survivors that motivated him personally to continue his own work to reform the church.

Five Americans who were sexually molested by Catholic priests will sue the Vatican. They aim to force the Catholic Church to release the names and details of thousands of priests involved in alleged abuse cases. (14.05.2019)