Eurovision in Israel: Tel Aviv caught between partying and politics | World| Breaking news and perspectives from around the globe | DW | 14.05.2019

"Dare to dream" is the motto of this year's Eurovision Song Contest in Tel Aviv. For some it's a big party, others are determined to boycott it. Sarah Hofmann reports from Israel. 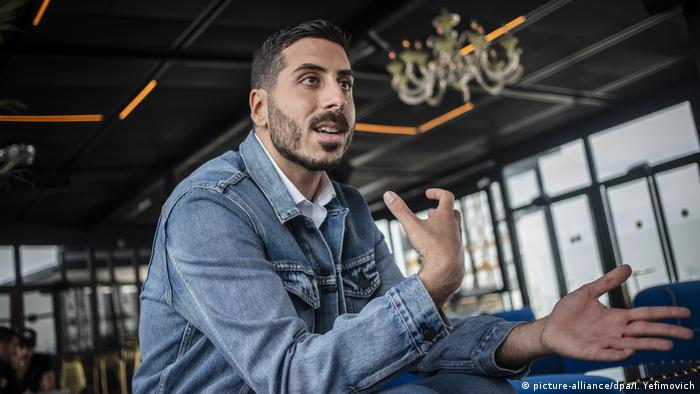 Irit Shalev is sitting in the makeup chair at Israel's private Reshet 13TV station. She is nervous. Once the makeup artist has finished applying eyeliner, she will go on stage to perform Izhar Cohen's "Ole ole" with her group EuroFalsh— which means she will dance and move her lips to the music.

The audience at the "Potchim Shishi" talk show will sing along because Cohen is a legend in this country. He won the European Song Contest in 1978, and it is thanks to his victory that the small Middle Eastern country hosted the contest the following year for the very first time.

"Having the ESC in Tel Aviv is like a dream come true," Shalev says — "because we are total ESC fans and because finally, we can reap the awards of years of work."

The lip-synch group EuroFalsh has been around for 20 years, and they only perform Eurovision songs, dancing and lip-synching to them. As a rule, the ESC is the opposite of mainstream, but in Tel Aviv at the moment, it is everywhere, says Shalev. 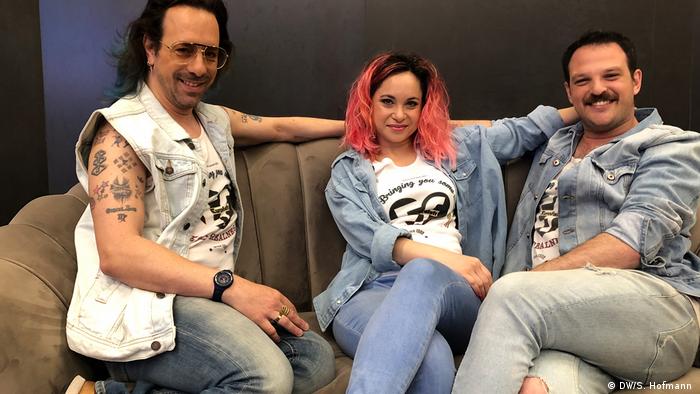 The entire city is still decked out in flags from last week's Independence Day, and these past days, more and more colorful Eurovision posters that read "Dare to Dream" — the official slogan for the 2019 ESC — have popped up. "Tel Aviv with its beaches is sexy and cool," says Shalev, adding that it's the "perfect place for the song contest."

The song contest was originally scheduled to take place in Jerusalem, like in 1979. Israel's ultra-Orthodox Jews, however, threatened to protest because the ESC final always takes place on a Saturday evening. It was clear that thousands of people would have to work on Saturday — a taboo for devout Jews as the Sabbath is the holy day of rest.

When it became clear that the ESC's host, the European Broadcasting Union (EBU), was not willing to postpone the final, the Israeli government moved the competition to Tel Aviv, a city famous for its party and start-up scene. There will be a bus service there that Saturday, which is normally strictly forbidden across the country on the Sabbath. Rehearsals will be held all day Saturday, too — reason enough for the ultra-Orthodox United Torah Judaism alliance to put coalition talks with Benjamin Netanyahu's Likud party on hold for the time being.

This is not the government's only concern in view of a festival expected to attract thousands of tourists to Tel Aviv and present a cosmopolitan peace-loving Israel.

Just days ahead of the Eurovision Song Contest, violence flared between Hamas in the Gaza Strip and Israel. Sirens did not sound in Tel Aviv, but in Ashkelon and Ashdod — just half an hour by car from Tel Aviv— people were repeatedly forced to flee to the safety of bomb shelters.

Over the course of just two days, Hamas and Islamic Jihad fired about 700 rockets at Israel from the Gaza Strip, four Israelis were killed and dozens wounded. The Israeli army attacked more than 300 targets in the Gaza Strip; according to Palestinian reports, 25 people were killed. It was a nightmare for the Israeli government, which wants to keep the ESC out of any Middle East news coverage.

Rockets fired at the ESC?

The reasons for the escalation may be complex, but Islamic Jihad has declared the ESC an occasion to push its agenda: "We will prevent the enemy from successfully holding a festival aimed at damaging the Palestinian narrative," the terrorist organization said.

People in Tel Aviv are unperturbed, however, and tell each other again and again that the Palestinians need the Europeans, that they "will not dare to attack during the ESC," and that "Tel Aviv is safe, nobody needs to be afraid to come here to celebrate with us."

"We will show people what a tolerant, cosmopolitan city Tel Aviv is," they say, adding that Eurovision stands for fun and will show Israel to be a country like any other — "at least that's what we can believe for a short while."

"Eurovision started out more than 60 years ago to unite the countries of Europe after the war," says Irit Shalev, the EuroFalsh performer, adding that even if the contest is often regarded as superficial these days, she feels the "initial vibe still exists."

"Inside the Eurovision bubble, there is no religion, no gender, no color, we are just all united in music and fun," Shalev says. 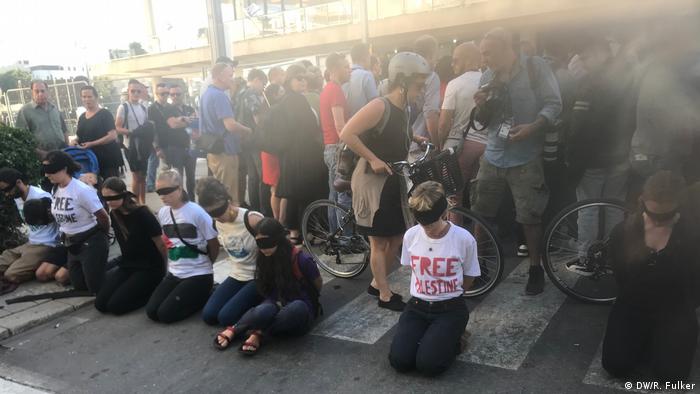 "That is nothing but pinkwashing," argues Tanya Rubinstein, who works for the Coalition of Women for Peace, an Israeli NGO, and has been organizing protests, including a demonstration on the evening of the final in front of the Expo Tel Aviv venue.

"Here in Tel Aviv, the contest is clearly not bringing people together because Palestinian people are just not allowed here." A Palestinian from the West Bank would need a permit from the Israeli forces which they would most likely not get, she says, adding that "people from Gaza almost never get a permit to come here, so you know it is not a celebration of being together."

Calls for a boycott

Rubinstein is not the only one organizing protests. The anti-Israeli Boycott, Divestment and Sanctions (BDS) movement has for months been urging countries and singers to cancel their participation in the contest in Tel Aviv.

Roger Waters of the British rock band Pink Floyd, who has more than once been accused of anti-Semitism in his own shows, is one of the most prominent BDS advocates. The Israeli government is using the ESC to "whitewash the brutal Israeli apartheid regime," he says.

Shoval Shirom, a student, couldn't agree less. "For the first time in 20 years, we won the song contest, we just had a good song and won," she says. "It's our right to host the contest, just like any other country would. The people demonstrating against the ESC want to deny Israel's right to exist," she says. That and anti-Semitic agitation are the main points of criticism leveled against the BDS movement.

So far, no ESC country has withdrawn from the contest, and only the Icelandic band Hatari is suspected of wanting to take part in protests. The ESC semi-final in Tel Aviv begins on May 14, a day before Palestinians commemorate Nakba Day, — literally the "catastrophe"— to commemorate the Palestinian exodus after the 1948 war.

Irit Shalev has tickets for the ESC final on May 18, excited to be there when Israel's Kobi Marimi sings live to thousands of fans from all over Europe. Tanya Rubinstein, on the other hand, will be standing in front of the exhibition hall, doing her best to draw fans' attention from the party for just a moment.

Sequins and flags: On the Eurovision orange carpet in Israel

This year's competition features songs from 41 countries. Participants presented themselves at a red carpet-style event in central Tel Aviv on Sunday, walking an orange carpet instead to reflect a sponsor's logo. (13.05.2019)