Israel reopened its crossings with the Palestinian territory after a decrease in tensions. Gaza Islamists had fired more than 600 rockets at Israel in one of the deadliest escalations in years. 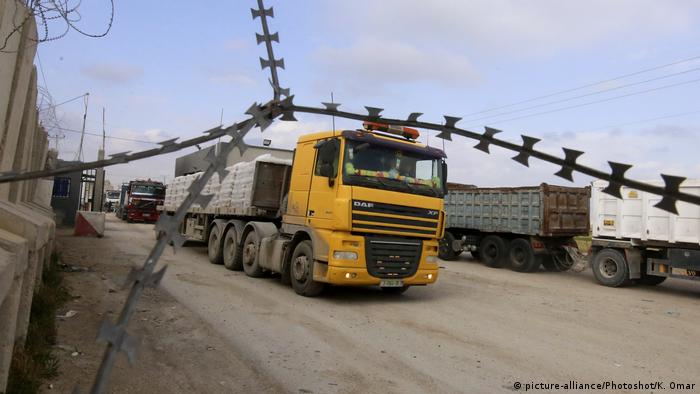 Israeli authorities on Sunday opened both the Erez and Kerem Shalom crossings, which are used to transport goods to the blockaded Gaza Strip.

Kamil Abu Rokon, the head of COGAT, the Israeli Defense Ministry unit that oversees the crossings, said on Twitter that the step was aimed at preventing a deterioration of living conditions in Gaza, according to a policy "that distinguishes between terrorism and uninvolved civilians."

Israel had closed the crossings on May 4, when Gaza ruler Hamas and its ally, Islamic Jihad, fired hundreds of rockets at Israel, killing four civilians. Israel's retaliatory airstrikes on militant targets killed at least 25 Palestinians.

The two-day flare-up, which began after four Palestinians in the Gaza Strip were killed in border protests on May 3, ended on Monday after Hamas offered a truce. Israeli officials lifted safety measures following the ceasefire offer.

Israel and Hamas have fought three large-scale wars since 2008.

Gaza officials said Sunday that Israel had agreed to ease its decadelong crippling blockade in exchange for calm. Israel did not confirm the deal, but on Friday lifted a ban on Palestinian fishing boats operating off Gaza.

Israel insists the Gaza blockade is necessary to stop terrorist attacks on its soil and to isolate Hamas. Rights organizations condemn the blockade as a punishment for Gaza's 2 million residents.

Hamas accuses Israel of not honoring an Egypt-brokered deal that many hoped would lead to Israel scaling back the blockade, which was imposed in 2007.

"Israel has the right to defend its security and respond appropriately to attacks," Demmer said earlier this week, adding that it was now important that the ceasefire be maintained and that the situation was not further aggravated.

Israel has reopened its two crossings to the Gaza Strip after closing them for nearly a week. They were closed after militants fired a rare long-distance rocket from the Palestinian enclave. (31.03.2019)