After militant group Hamas seemingly offered a ceasefire following weekend attacks, Israel has drawn back its protective measures. Hundreds of rockets were fired into Israel over the weekend, prompting schools to close. 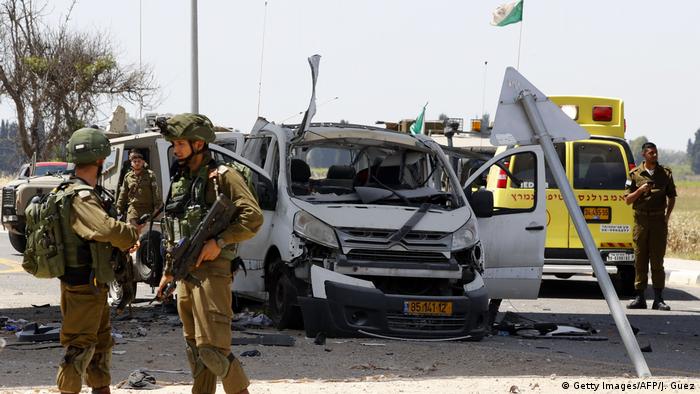 The Israeli army on Monday lifted all protective restrictions imposed near the Gaza area during the weekend's flare-up in violence, after the Islamic militant group Hamas appeared to offer a conditional ceasefire.

The Israeli Home Front Command said residents of the south could return to their routines, and schools and kindergartens in the area were allowed to open, although some decided to remain closed following the hundreds of rockets that were fired at Israel over the weekend.

The Israeli Transportation Ministry announced that all public bus routes in the south would return to full and normal operation. The railway line between the cities of Ashkelon and Beersheba was also set to resume later in the morning.

More than 600 rockets were fired from Gaza into southern Israel on Saturday and Sunday, prompting a heavy response. Four civilians in Israel were killed by the rockets, the first to be killed by rocket fire since the seven-week Gaza war in 2014, and 23 people — at least half civilians — have died following Israeli retaliatory strikes in Gaza.

DW's Israel correspondent Tania Krämer said there was "relief" in Gaza at news of the ceasefire. However, the people there were "waiting to see whether it was just a period of calm or whether there will be a real solution."

Hamas leader Ismail Haniyeh said in a statement on Sunday that the militant group was "not interested in a new war." He said the group was ready to "return to the state of calm" if Israel stopped its attacks "and immediately starts implementing understandings about a dignified life."

Despite Haniyeh's offer of a possible ceasefire, warning sirens could still be heard in Israeli cities on Sunday night and Israeli authorities have not officially confirmed whether a truce has been reached.

International pressure was stepped up on Hamas to end the latest escalation.

UN Secretary-General Antonio Guterres condemned Hamas' attacks and urged all parties to "exercise maximum restraint." A UN envoy said it was working with Egypt to try to end hostilities.

"Israel has the right to defend it's security and respond appropriately to attacks," Demmer said, adding that it was now important the ceasefire be maintained and that the situation was not further aggravated.

US President Donald Trump wrote on Twitter: "Once again, Israel faces a barrage of deadly rocket attacks by terrorist groups Hamas and Islamic Jihad. We support Israel 100% in its defense of its citizens.... To the Gazan people — these terrorist acts against Israel will bring you nothing but more misery. END the violence and work towards peace — it can happen!"

Hamas, an Islamic militant group entirely opposed to the existence of Israel, seized power from the Western-backed Palestinian forces in 2007 and has since fought several wars with Israel.

Previous rocket attacks have often resulted in Egyptian-mediated agreements to reduce the intensity of the 10-year blockade that has crippled the Gaza Strip.

Hamas and its allies Islamic Jihad initiated the latest attacks by claiming Israel had failed to deliver on its promises to loosen the blockade. It also coincided with a moment of weakness for Israeli Prime Minister Benjamin Netanyahu, deep in post-election coalition negotiations with his hard-line political partners.

But Hamas are also in a tricky spot. A year of heavy protests at the Israeli border have yielded no benefits, and the residents of Gaza have been protesting over dire living conditions. It is keen to prove itself as an effective resistance force, but its residents appear to have little appetite for the seemingly inevitable destruction if Hamas escalates things too far.

Netanyahu's Likud and right-wing allies appeared to have beaten a bloc of parties on the left. The unofficial results mean Netanyahu will likely be able to form a coalition. (10.04.2019)

Israel hit by rockets from Gaza after Palestinians killed in protests

A monthlong cessation in hostilities has been broken by a new protest that turned violent at Gaza's border with Israel. This has been followed by a barrage of rockets fired from Gaza. (04.05.2019)