The Ukraine crisis has led to a rift between the West and Russia, with both sides imposing sanctions against each other. However, Russia's gas exports have so far remained untouched - for a number of reasons. 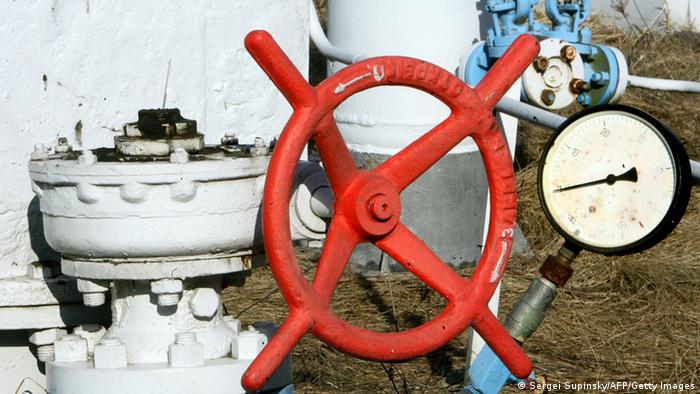 The sanctions imposed by the West are taking a toll on Russia, where the economy is now estimated to be growing by only 1 percent, half earlier forecasts, Russia's economy ministry announced earlier this week.

According to the ministry, the crisis in Ukraine is the reason for the drop in the pace of Russia's economic expansion. Moscow has also responded to the sanctions by announcing countermeasures that include a ban on Western food imports.

But Russia also has one more weapon up its sleeve: natural gas. Terming the sanctions imposed by the EU as a "thoughtless and irresponsible step," the foreign ministry in Moscow said they will "inevitably lead to higher energy prices" in Europe.

Unlike the US, which is not reliant on gas imports, Europe is heavily dependent on Russian gas. A quarter of the gas consumed in Europe comes from Russia. While Russian gas accounts for 38 percent of the total gas consumption in Germany, that figure in some southern and eastern European countries rises to as high as 100 percent. 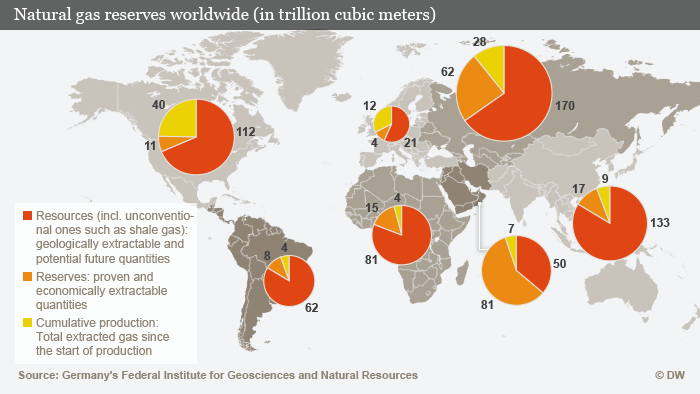 The concerns over gas supplies were aired once again by Ukrainian Prime Minister Arseny Yatsenyuk on Wednesday. He claimed that he had knowledge of Russian plans to turn off gas supplies to the EU in winter. Russian Energy Minister Alexander Novak immediately denied the claims.

But what happens if Moscow stops the gas flow? "In the short term, it would be very difficult to find substitutes for such huge quantities of gas," said Kurt Oswald, energy expert at the management consulting firm A.T. Kearney. Although more gas could be imported from Norway and the Netherlands, it would not be sufficient to make up for the shortfall, he told DW.

Even liquefied natural gas would not be able to cover the entire loss. There is infrastructure in Europe to introduce LNG as the existing terminals are operating at only 30 percent capacity, Oswald said.

But under current market conditions, Oswald said, it would not be possible to replace all Russian gas imports as prices are too high and there is not enough LNG on the world market: "In the next three to five years, therefore, Europe will remain relatively heavily dependent on Russia." 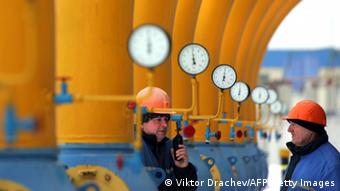 Despite the strong reliance, Europe has so far failed to take serious steps. The gas storage sites in Europe are nearly full. Germany has by far the largest storage capacity, and its facilities are full to 88 percent of capacity. Experts say this is enough to cover the demand in winter, even if there were a total halt of Russian supplies.

"Price increases are possible only for new contracts," Germany's economy ministry also announced in early August. There are no concerns regarding gas supplies, the ministry added. However, it stressed that the situation is being carefully monitored.

Angela Merkel's visit to Kyiv is a gesture of solidarity. And it is a particularly important one for her Ukraine audience, the most extreme of whom had feared that a "Merkel-Putin pact" was in the making. (23.08.2014)

Kyiv has warned it might cut Russian energy transit flows to Europe and ban Russian airlines from crossing its airspace. Ukraine has also proposed sanctions on Russian individuals and companies "financing terrorism." (08.08.2014)

Oswald says Russia is unlikely to break its contracts. Russian gas has been flowing steadily to the West for four decades and Moscow has always maintained deliveries to Europe, he underlined. "I don't believe Russia will risk its image of being a reliable supplier of fuel."

"Sixty percent of Russian government revenues come from the sale of oil, gas and coal - a large part of it from doing business with Europe. And Russia would cut into its own flesh by stopping the exports," Kemfert explained.

A far greater likelihood is the danger Russia will cut off gas supplies to Ukraine, Oswald said. Kyiv would then be forced to tap the gas destined for Europe, he said, adding that this would be similar to a gas stop for Europe as the amount of fuel flowing to other countries would then be significantly reduced.

Russia has twice turned off the taps to Ukraine since 2006 due to disputes over prices and transit conditions. Russia had also accused Ukraine of tapping the pipelines and stealing gas. Even this time around, since mid-June Moscow has been demanding Kyiv pay off its debts before gas supplies resume. Ukraine, in return, has threatened to block Russian oil and gas supplies to the EU.

It is currently impossible for Russia to ship gas to Europe bypassing Ukraine. But when the South Stream pipeline comes into operation, it and the Nord Stream pipeline could transport about 110 billion cubic meters of gas without passing through Ukraine. This compares to the average 140 billion cubic meters currently being delivered by Russia to Ukraine, Oswald said.

Against this backdrop, EU Energy Commissioner Günther Oettinger will be in Moscow on Friday (29.08.2014), where he will meet Novak in an attempt to mediate between Russia and Ukraine and resolve their gas dispute.

"The situation is serious," Oettinger said at the West Balkan Conference in Berlin. Although he said he didn't expect disruptions - either due to Russia stopping supplies or Ukraine blocking gas transit - he said the likelihood of this happening "isn't zero."

"We need Ukraine as a transit country for gas deliveries to Western Europe - and Ukraine needs gas in winter," Oettinger said in an interview on Thursday. He said he would persuade both parties to accept a compromise solution. For six months, the two parties should agree on an interim price until the international arbitration court in Stockholm, whose doors the two countries knocked on, delivers its verdict.

Moreover, Oettinger announced that the European Commission would present a concept to the EU leaders in mid-October on ways to ensure energy security. He said it will not only make sure that every member state has enough gas reserves to keep its homes warm in winter but also secure enough financing for the development of adequate infrastructure. But with Russia apparently stepping up its involvement in the Ukraine conflict, it will be a long six-week wait for the details.