The South Stream pipeline will make Austria a major hub in the European gas industry. But Kremlin-controlled Gazprom will be able to bypass beleagured Ukraine. 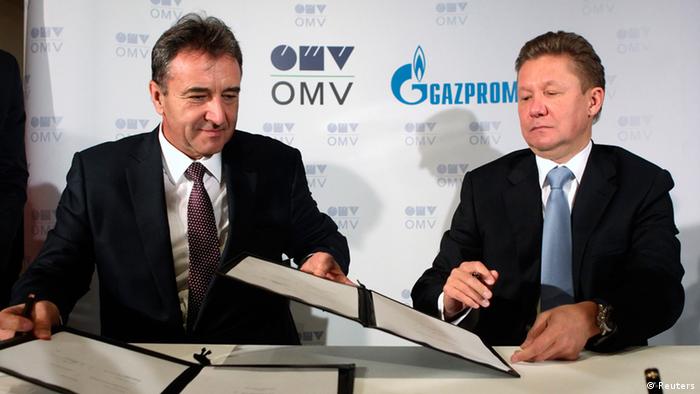 South Stream will secure Europe's gas supply. That was the message of Austrian energy company OMV on Tuesday (24.06.2014) in Vienna.

But the agreement between OMV and Russian state-owned gas monopoly Gazprom is causing headaches for Brussels: The EU authorities fear distortion of competition if a gas supplier is also involved in distribution. The European Commission issued a dry statement that said merely it "noted" the agreement.

South Stream is a planned gas pipeline with a capacity of 63 billion cubic meters per year to be built by Gazprom. In 2011, OMV and the Kremlin-controlled giant entered a joint venture, South Stream Austria, to build the Austrian section.

In two and a half years, from the end of 2016, the gas will flow across the Black Sea to Bulgaria, Serbia, Hungary and Austria, where South Stream will end at the Baumgarten gas distribution center. From there, the gas will be pumped to southern and central Europe, supplying around 38 million households. The 2380-kilometer (1479-mile) pipeline should reach its full capacity in 2018.

On Tuesday, the deal was officially sealed. Austrian President Heinz Fischer invited Russian President Vladimir Putin to Vienna. The move came as the foreign ministers of the EU member states, including Austria, were threatening Russia with new sanctions because of its role in the Ukraine crisis. 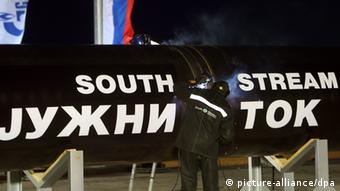 The EU Commission refused to back South Stream because the pipeline would give Russia the ability to bypass Ukraine in supplying Europe with gas and - it feared - give Russia undue influence over Europe's energy supply.

At the press conference, OMV boss Gerhard Roiss tried to allay these concerns: "In 50 years ... Gazprom was always a reliable supplier of gas to OMV and its customers," he said. "This decision is an investment in the security of supply for Europe. South Stream will fully comply with European law."

"So far, there have been few alternative pipeline routes that can be used," she said. "The South Stream pipeline would bypass Ukraine and could supply other European countries via Austria."

Austria would thus become an important gas trading center, not least because of its geographical location in Europe, but not a "big player" - "that would be reaching too high."

Alexey Miller, Chairman of the Gazprom Management Committee, sees South Stream as a guarantor of "additional flexibility and reliability of Russian gas supplies to European markets."

The EU Commission is less optimistic. The project faced harsh criticism even before it began. According to EU law, a gas supplier may not be involved in infrastructure. In addition, EU Energy Commissioner Günther Oettinger fears that Russia's energy policy is meant to further sideline Ukraine. "It is not convincing that they're saying on the one hand, we must stabilize Ukraine, while on the other hand building infrastructure without Ukraine," he said in Brussels.

Unlike Austria, Germany has less interest in South Stream, largely because it can be supplied via the North Stream pipeline. In addition to Gazprom, Italy's Eni and France's EDF are involved in the project along with German chemical company BASF, through its Wintershall subsidiary.

Should the EU continue to block the project, Russia intends to bring the conflict before the international arbitration court in Stockholm. "The move by Russia to bring our EU rules before the World Trade Organization is not the best approach for further negotiations," Oettinger said.

The Austrian newspaper "Standard" was not alone in describing the signing in Vienna as the primacy of economics over politics.