The European Union heads of state and government are meeting to talk pandemic strategies and diplomacy. They are also set to welcome Joe Biden at the videoconference. 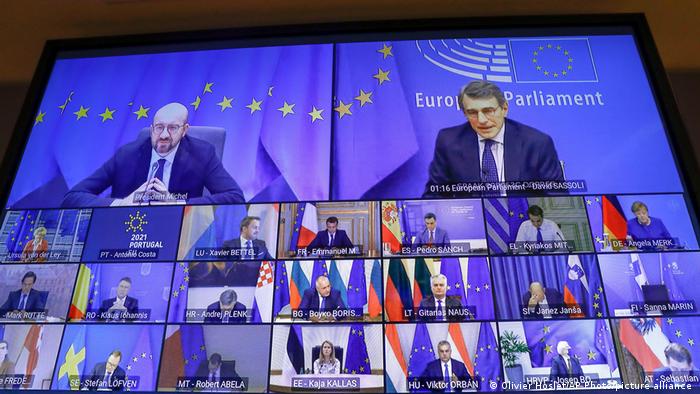 Via computer, the 27 national leaders will be joined by Joe Biden

European Union leaders are discussing pandemic strategies on Thursday amid pressure over COVID-19 vaccine shortages and a potential third wave.

The bloc is also set to welcome a guest appearance by the United States President Joe Biden.

Some EU member states, including France, Belgium, the Netherlands and Germany, have been battling a fresh spike in coronavirus cases. Plans for an in-person summit were abandoned in the build-up to the event.

On top of the agenda is speeding up the vaccination drive, which has been slower than in Britain and the United States.

What about speeding up vaccination?

On Wednesday, the EU Commission tightened vaccine export requirements amid a post-Brexit row with the UK.

Commission President Ursula von der Leyen, had stressed the importance of reciprocity as she argued that the EU exported at least 9 million vaccine doses to Britain, while Britain exported none to the EU.

But an EU-UK joint statement published Wednesday said the two were working together towards a "win-win situation" as they vowed to increase vaccine supply "for all our citizens."

Vaccine export blockades split some member states. Belgium and Ireland have voiced concern about a potential backlash. At the same time, Italy believes the bloc should be firm and prioritize its citizens.

AstraZeneca has under-delivered the promised doses to the EU in the first quarter and is expected to miss the delivery target in the second quarter.

EU leaders are also discussing the so-called vaccine passports, which the Commission dubs "Digital Green Certificate," to try to facilitate travel and revive the tourism sector.

Debates have grown over ethical dilemmas surrounding the concept, including fears of discrimination in linking free movement to health benefits and privacy concerns. But the Commission claimed that it had considered such concerns.

The bloc's relations with Turkey and Russia are also on the agenda. While the EU is seeking to revamp ties with Ankara, its relations with Moscow has been strained over the imprisonment of Russian opposition figure Alexei Navalny.

The heads of state and government are also set to tackle transatlantic relations as they are joined by Biden later in the day.

Return of the ally

Biden's appearance comes as the US seeks to mend its ties with the EU after the departure of the former president, Donald Trump, who led dramatic diplomatic battles.

Biden's video conference also comes a day after his top diplomat Antony Blinken wrapped up a visit to Brussels. Blinken vowed cooperation with NATO partners and the EU, especially facing Russia and China, as Europe and the US rolled out a new tougher line against several regimes around the world.

On Monday, the US and EU issued sanctions on officials and entities in six countries, Russia and China included, over alleged human rights abuses.