The EU wants to streamline military movements across the bloc and make infrastructure more suitable for military use. The plan has been dubbed a "military Schengen," a reference to Europe's passport-free travel zone. 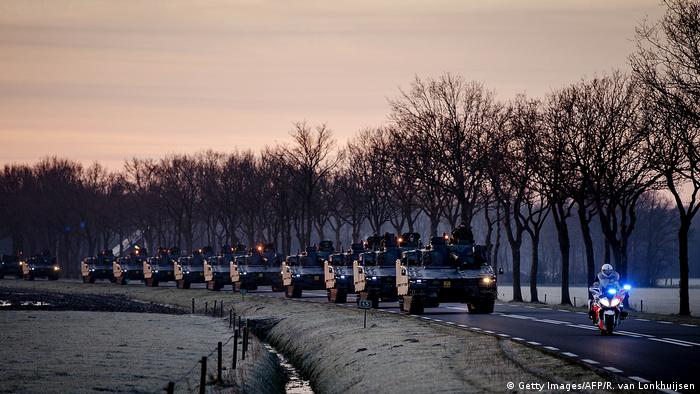 The European Union unveiled plans on Wednesday to lower barriers for moving military equipment and troops across Europe amid rising concern of Russian aggression.

The 28-member bloc has sought to better integrate defense capabilities and capacities with a vision towards creating a European Defense Union by 2025 and meeting NATO priorities for swift military movements.

The European Commission proposal calls for identifying rail and road routes suitable for military transport and upgrading existing infrastructure, for example by ensuring the height or the weight capacity of bridges can handle tanks and heavy military equipment.

Another part of the EU executive's plan wants to evaluate options to streamline border checks to speed up the transport of military hardware, dangerous goods and personnel across borders.

"By facilitating military mobility within the EU, we can be more effective in preventing crises, more efficient in deploying our missions, and quicker in reacting when challenges arise," said EU foreign policy chief Federica Mogherini.

EU Commissioner for Transport Violeta Bulc said the objective is to make sure military needs are taken into consideration when developing infrastructure projects.

"This means a more efficient use of public money and a better-equipped transport network, ensuring a quick and seamless mobility across the continent. This is a matter of collective security," she said.

The European Commission plan must now be approved by EU governments and reviewed by the European Parliament. The first part of the action plan is expected to be carried out in the coming months and a first progress report delivered in summer 2019.

A confidential NATO report last year questioned the alliance's ability to defend against a Russian attack, citing a smaller command structure since the end of the Cold War and logistical difficulties on the alliance's eastern flank.

NATO is planning to establish a new logistics command to move troops and equipment more quickly across Europe in any possible conflict. A second command is planned to be set up to ensure mobility in North Atlantic shipping lanes. The European Commission said the action plan compliments rather than competes with NATO.