EU-Israel trade thriving, despite the politics | Business| Economy and finance news from a German perspective | DW | 19.04.2018

EU-Israel trade thriving, despite the politics 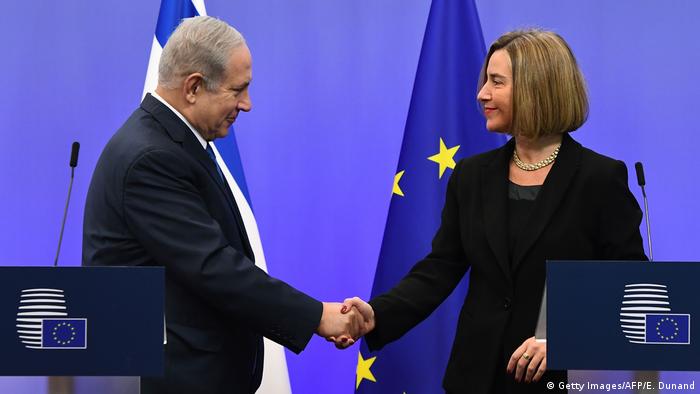 If Europe has a collective psyche, it is one that is split over Israel. As the liberal Israeli newspaper Haaretz wrote in January, one part views Israel as an outpost of Western civilization and supports the right to Jewish self-determination. The other sees it as an embarrassing hangover of Western colonialism, or worse, a guilty side effect of its own anti-Semitic past.

A century after the Balfour Declaration — when Britain supported the establishment in Palestine of a national home for the Jewish people — and 70 years since Israel came into existence after the horrors of war in Europe — some old and some newer contradictions blight Europe's relationship with Israel.

Take Israel's reputation as a startup nation, for example. Tel Aviv is widely admired in Europe for its acumen, innovativeness and academic and creative exports, all stereotypical areas where Jews have excelled, in European eyes. But at the same time there has also been a surge in anti-Semitism in Europe. Some Israeli politicians, academics and diplomats, meanwhile, have accused the EU of treating Israel unfairly, but at the same time Israeli governments have hinted that an EU membership bid is a possibility.

Some see this mirrored in the inverse relationship between strengthening business ties and the EU's deteriorating political and diplomatic links with Israel.

Business is business after all

Meanwhile, business thrives. Israel and the EU have long collaborated in fields such as agriculture, aviation, science and in R&D, including nanotechnology, health, environment and communications. In its latest incantation, Israel participated in the EU R&D Framework Program (FP7) and in June 2014 joined the EU's research and innovation program, Horizon 2020.

The EU is also Israel's main trading partner, accounting for one-third of its total trade. EU imports from Israel between 2011 and 2016 stood at around $15 billion (€12.25 billion).

Israel supplies Europe with high-tech products, including software and apps used in many PCs and smartphones, medical devices, chemicals and pharmaceuticals.

But on the political front, things could be better. Of course.

Since Prime Minister Benjamin Netanyahu's election in 2009 political relations have dipped dramatically, mainly due to the deterioration in relations between Israel and the Palestinian Authority (PA).

In 2012, the Palestinians abandoned negotiations with Israel in favor of seeking international recognition and becoming a non-member state by the UN, a move that split EU members.

In late 2014, the parliaments of France, Ireland, Portugal, Spain and the UK, as well as the European Parliament, passed motions supporting extending recognition to a Palestinian state, which in turn pushed Israel to retaliate with new housing plans for the E1 area east of Jerusalem.

European leaders — who have long criticized new houses and neighborhoods built beyond the 1967 borders — then sought more specifically to ensure that European funds do not reach Israeli institutions in the West Bank, East Jerusalem or the Golan Heights.

This in turn has at times pushed Netanyahu to threaten to seek alternative funds from Asia and North America to compensate Israeli research institutions.

Netanyahu won reelection in 2015 with a narrower right-wing coalition uninterested in a Palestinian state and soon after quietly dropped the phrase "two state solution."

In July 2017, he approved in principle a cooperation agreement with the EU containing a clause excluding the settlements, thus in effect consenting to EU funding contingent on a boycott of the settlements.

Growth against Stasis - Help for Palestinian IT Start-ups

Growth against Stasis: help for Palestinian IT startups

"The EU has potentially enormous leverage in the Israeli-Palestinian conflict but unfortunately doesn't use it," Daniel Schwammenthal, the director of the AJC Transatlantic Institute, told DW.

"As the largest donor to the PA and its closest diplomatic partner in the West, the EU could play a much larger role in trying to address the shortcomings on the Palestinian side that stand in the way of a negotiated two-state solution," Schwammenthal said, noting radicalization and instability of Palestinian society and the PA's political system as the major obstacles to peace.

"But even if we set aside this major problem for now and focus only on the PA of President Abbas, Israel's purported peace partner, there are major problems here as well which deserve much greater attention by the EU," Schwammenthal said.

Meanwhile, many European leaders have helped push what had been a grassroots Boycott, Divestment, and Sanctions (BDS) movement of Israel into the mainstream.

While Israel is an associated state of the EU and relations between the two are defined in the European Neighborhood Policy (ENP), the Council of the EU last year adopted a European Commission proposal requiring labels specifically for Israeli goods produced in the West Bank, the Golan Heights and East Jerusalem.

But critics say that an EU boycott that focuses on the settlements actually leaves most of Israel's economy and population untouched. Only about 2 percent of Israel's exports to Europe are affected.

Furthermore, the proportion of differentiated goods exports from Israel has grown, making it far less vulnerable to boycotts, and many Israeli exports are also intermediate industrial products, making any boycott much harder to implement.

A video has surfaced showing an Arabic-speaking man striking at another young man wearing a yarmulke — in broad daylight in Berlin. DW Editor-in-Chief Ines Pohl is concerned about where Germany is headed. (18.04.2018)

EU calls for 'utmost restraint' after violence along Israel-Gaza border

The EU has questioned Israel's use of force during clashes. Among the dead is a Palestinian journalist who monitoring group Reporters Without Borders (RSF) claim was "obviously the victim of an intentional shot." (07.04.2018)