Balfour Declaration: Is it still important to the Middle East 100 years later? | News and current affairs from Germany and around the world | DW | 02.11.2017

British Foreign Secretary Balfour endorsed creating a Jewish homeland in Palestine in 1917. It was a time shaped by ideas and empires long since gone. Yet a century later, arguing about Balfour is again in vogue. 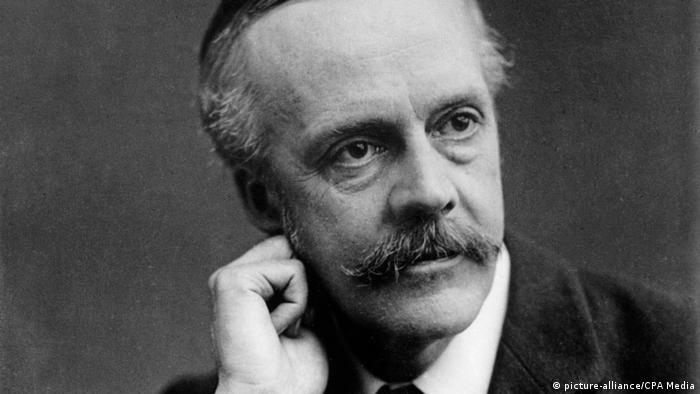 It was a world of empires that had descended into a war of empires in 1917. Harrowing battles unlike anything the world had ever seen — poison gas, tanks, machine guns, aerial bombardments — pushed Great Britain and its allies to the brink of defeat against the Germans.

Three years into World War I, the British government pivoted to the Zionists, supporters of a Jewish state, by announcing it would "favor the establishment in Palestine of a national home for the Jewish people." Courting Zionists, it thought, might clinch more help with war from the United States, where they believed "Jewish influence" could sway decision makers.

Named for the British foreign secretary who penned it, Arthur James Balfour's letter on behalf of his government helped lay the legal foundation for what would later become Israel.

After collecting dust in history books for decades, Balfour has once again become a buzzword amid a stalemate in Israeli and Palestinian peace talks.

The declaration comes up in connection with the debate on Israeli legitimacy in the form of the question "Was the charter a good thing or a bad thing?," said historian James Renton of Edge Hill University and visiting fellow at the European University Institute. But this, Renton said, overlooks the breadth of the document's historical significance.

Read more: Sykes-Picot — 'A tapestry of plans and promises' 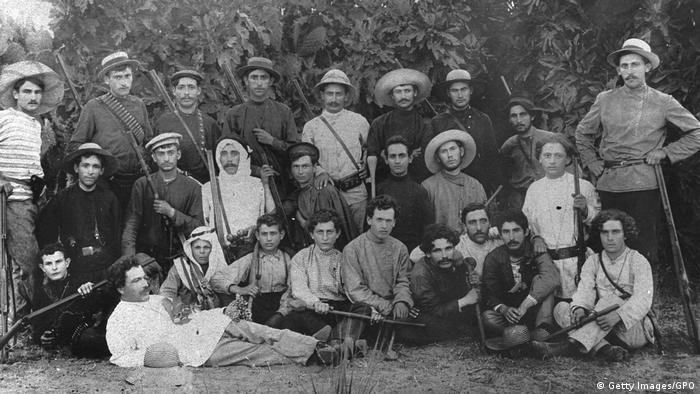 Jewish settlers in 1900 were part of a growing Zionist movement. The political movement that called for a Jewish homeland began in the late 1800s in Europe, where Jews faced rising anti-Semitism

Over the past century, an internationally recognized Israeli state eventually emerged, as have wars against Palestinian Arabs. Some of Israel's neighbors still do not recognize its right to exist. Iran and some Palestinian groups in the past have threatened its destruction. This and stalled peace talks between Israelis and Palestinians raise the question of how far back should the roots of the current conflict be traced. The Balfour Declaration is the quickest answer for some, but an oversimplified one, according to Renton.

"There's not enough attention paid to why it all went so wrong, how did the British get is all so wrong?" Renton said.

The British Empire: Helping Zionists to help themselves 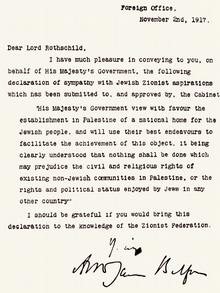 The British Empire's struggle against the Germans and the Ottoman Turks in World War I highlighted two issues of immediate importance in 1917. First, an American contribution would be essential to winning the war. Secondly, the British needed a trustworthy ally near the Suez Canal, their artery to the Indian Ocean. Seeking Zionist support could help with both of these, or so their thinking went.

Promising to ensure help for Zionists in Palestine, while also ensuring the "civil and religious rights of non-Jewish communities in Palestine," as Balfour wrote, reflected a major miscalculation, Renton said.

The British considered themselves civilized and intellectually superior and political independence represented the "apex of civilization" for them. As they considered Jews and Arabs less civilized, they falsely concluded that Jews and Arabs would never really want self-determination. Thus supporting Zionist goals was to serve their own geopolitical interests in the Middle East. 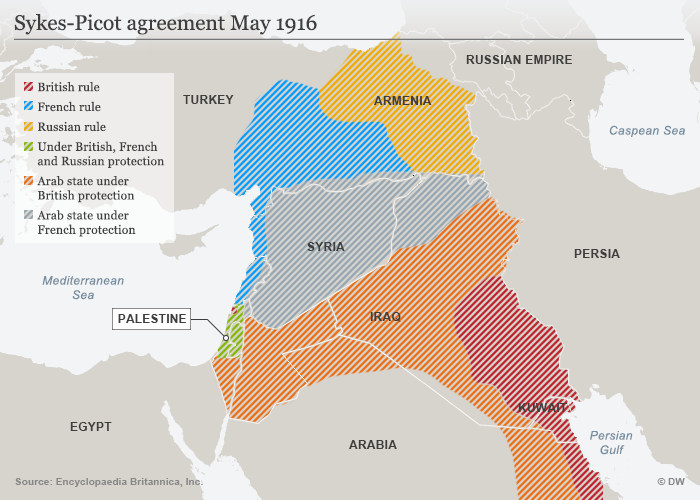 In the early 20th century, the idea of self-determination outside of Western Europe was different than today's. The Sykes-Picot agreement was one of several ideas on how to divvy up the Middle East if Germany and the Ottomans lost the war

"If they didn't have these racial ideas about Jews and Arabs," an idea widely shared by European political leaders at the time, "they wouldn't have gone down that path," he said, referring to the decision to facilitate the creation of a Jewish state.

Why the British kept their word, mostly

Before World War I, tensions had already been rising between Palestinian Arabs — under Ottoman rule at the time — and Jewish immigrants, whose numbers had grown to over 10 percent of the population in the region between the emergence of political Zionism in the late 1880s and 1914.

"Clear, numerous, forecasts of disaster were there right from the start," according to historian William Mathew, a research fellow at East Anglia University. Palestinian Arabs were already concerned about Zionists buying land and seeking to form their own state before World War I. The British were aware of the animosity, Mathew told DW.

Palestinian Arabs had assumed they would achieve national freedom under the British, but with the Balfour Declaration, which was an open secret between its writing in 1917 and its being officially made public in 1920, they became aware nationhood in the regions would likely be for either Zionists or Palestinian nationalists. 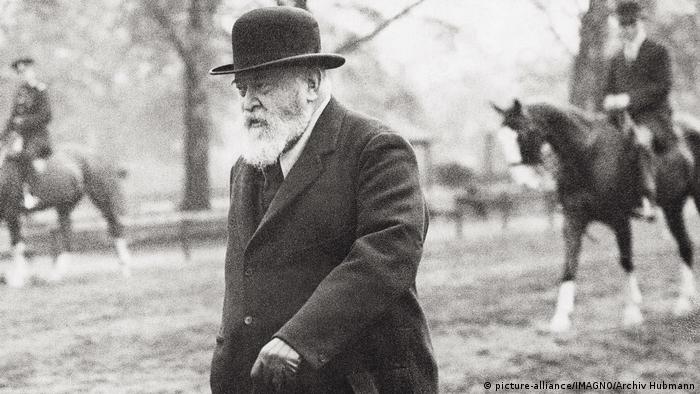 Balfour addressed his declaration to Lord Lionel Walter Rothschild, a prominent figure in Great Britain's Jewish community. The British government hoped Zionists' support would help them with their own geopolitical interests

Arab groups attempted to reject Zionism in the region, but the British were already legally obliged to implement the Balfour Declaration, which the League of Nations enshrined in Article 22 of its convenant and Articles 2, 4 and 6 of the preamble of the Palestine Mandate.

Between 1918 and 1921, some 18,000 Jewish immigrants settled in the Palestine Mandate. With British support, the Jewish population developed the "yishuv," the building blocks of statehood that established systems to meet basic health, education and trade needs in their communities.

The rise of Adolf Hitler and his Nazi regime in 1933 further spurred Jewish immigration to the British-controlled region. By 1936, unrest in the area reached new heights: the Arabs carried out a violent uprising known as the Arab Revolt that targeted both Jewish and British for three years and made clear to the British how deep the divide between the two sides was.

"The Balfour Declaration has, in fact, been a dead letter since 1939 when the British interests changed rapidly. On the eve of WWII they wanted the Arabs on their side against Hitler," said historian Michael Cohen, a professor emeritus at Bar-Ilan University in Israel. 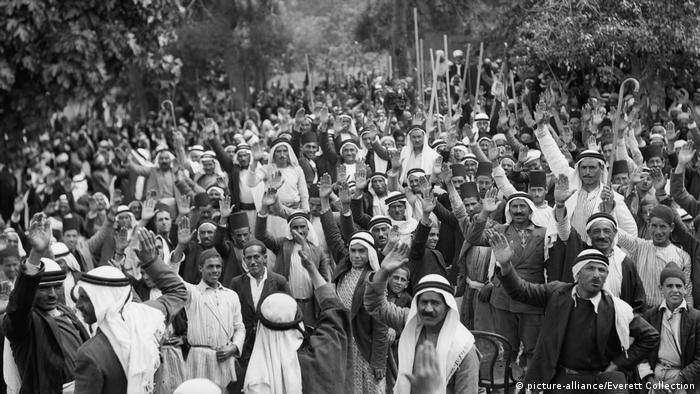 The Arab Revolt followed years of tension between Palestinan Arabs and the British civilian administration over its support of Jewish interests. By the end of the uprising in 1939, the British agreed to limit Jewish immigration for five years

Revelations that the Nazi regime attempted to systematically exterminate Europe's Jewish population rejuvenated international support for a Jewish nation. This time the main advocate was US President Harry Truman. On May 14, 1948, British control ended and Israel was declared a nation and with it, some historians have argued, the Balfour Declaration lost its significance and relevance.

"It's nothing more than a symbolic act and neither Arabs nor Jews rely on the British. You can't turn history back to 1917 and the interests which were prevalent in those days," Cohen said.

However, while historians agree historical context is vital to understanding the document, it's relevance remains clear as it was "the rubber stamp" for Zionists at the time, Renton said.

These days, Balfour is invoked, for example, in support of or opposition to an international movement to boycott Israeli goods in a bid to pressure Israel over its settlements in the West Bank. The words and the act of the declaration, however they were intended in the context of 1917, are still considered by some as more than a symbolic act that paved the way to Israeli statehood.

Palestinian leaders to file complaint against Britain for 1917 Balfour Declaration

Palestinian leaders have said they want Britain to make amends for a declaration which they believe opened the door to their loss of homeland to Israel. It is not clear where or to whom it will be made. (26.07.2016)

Israel tightens security for Palestinian protests triggered by tensions over the placement of metal detectors at the Jerusalem holy site Haram al-Sharif, also known as Temple Mount, worshipped both by Jews and Muslims. (21.07.2017)