Tensions have been rising between the 27-member bloc and China over a range of issues, including Hong Kong and the coronavirus pandemic. After speaking with Chinese leaders, EU chiefs sent out a stern message to China. 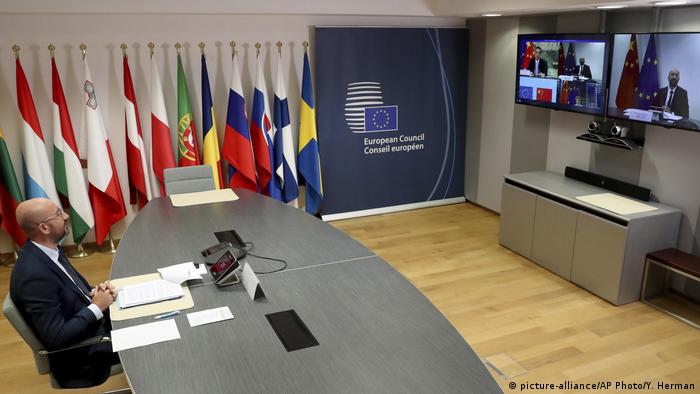 Top EU officials struck a tough tone during talks on Monday, pressing China on its trade and investment relationship and warning of "very negative consequences" if it goes ahead with aproposed controversial security law for Hong Kong.

"We continue to have an unbalanced trade and investment relationship,'' said von der Leyen, adding that more ambition was needed on the Chinese side to conclude negotiations on an investment agreement.

Michel also called for a redress of the trade relationship, saying: "We made it clear that we need to resolve concrete problems."

Negotiations over long-term market access for investment first began in 2014. As part of the investment agreement, the EU wants China to open up the market for foreign investors, ensure greater transparency, and offer fair terms for European companies.

Discussions, however, have fallen into a stalemate. EU officials have accused China of failing to make good on commitments it made last year linked to the deal.

A deal could still be possible this year if China makes concessions, said Michel. He called for intensified talks in the next few months.

On Hong Kong, Michel said: "We expressed our grave concerns about the proposed national security law for Hong Kong."

"We called on China to follow the promises made to the people of Hong Kong and the international community regarding Hong Kong's high degree of autonomy and guaranteed freedoms."

On Tuesday, China insisted the national security law was a "domestic affair."

"We oppose any foreign interference in this matter," said Wang Lutong, director-general of European Affairs at China's Foreign Ministry, adding that Beijing had made its stance clear in the video summit between Jinping and the top EU leaders.

On coronavirus, Von der Leyen on Monday said: "We've seen cyberattacks on computing systems, on hospitals, and we know the origin of the cyber attacks."

The stern message to China comes after the EU came under fire for defending its decision to consent to Chinese censorship of a letter co-written by EU ambassadors, ahead of its publication in Chinese media.

No Chinese officials took part in the news conference.

China is willing to increase cooperation with the bloc on COVID-19 vaccine and treatment development to fight against the virus pandemic, Li said.

Last week, China's ambassador to the EU had said the talks were an opportunity to make relations "more productive and substantive by seizing opportunities and addressing challenges."

But he also criticized Brussels plans to apply tougher rules for heavily subsidized foreign companies, which would hit Chinese firms.

In a wide-ranging interview with DW, Foreign Minister Heiko Maas urged India and China to "de-escalate" their deadly border spat. He also said NATO would endure despite Trump's plan to trim US troop numbers in Germany. (18.06.2020)