The head of the European Chamber of Commerce in China says the Asian country has lost some of its influence in the world. But he doesn't expect a fundamental rethinking of economic ties in the wake of the crisis. DW: How would you describe the sentiment of German and European business leaders toward China at the moment?

Jörg Wuttke: I think sentiment in Europe as well as in the whole world is still very bad. China was the first country hit by the coronavirus crisis, and is probably the first leaving it behind. But uncertainty prevails, and everyone is wondering what's coming next.

Will there be a backlash? How long will it take until a treatment has been found? How will Chinese consumers react to the crisis? Will the Chinese economy rebound, and is this going to be a steady recovery, or will it follow the pattern of a W-shaped curve? China is not alone on this planet and is currently seeing declines in many of its global markets.

For us, all these issues are coupled with many problems on the ground, including questions such as how European companies can bring their specialists and their families back into China? The country's borders are still closed to foreigners, unlike in Germany, where nationals from abroad can still enter the country if they have residence status or German relatives.

Are there any winners in this crisis, and do you see any reason for optimism at the moment?

You would really need a magnifying glass to find any winners, because they are so few and far between, maybe there are some in the health services sector. Luckily, there are industries experiencing a recovery now, like automobiles, where German manufacturers have seen sales in China rebounding to almost the same levels as last year. The chemicals industry is also benefiting from the upswing in autos.

In the middle of the crisis, there is currently much talk about business relocations and diversifying supply chains away from China. By contrast, only about 10% of European companies are actually weighing such moves, according to a recent survey. What's your take on this issue?

There are many companies in Europe, but also in the United States, asking themselves: Where should we go, if not to China? China currently accounts for 50% to 60% of global growth. So if you are not in China, you're not in the forefront of economic development.

China boasts some of the world's most important industrial clusters, among them Jiangsu for the chemicals industry and Guangzhou for electronics. You cannot easily replicate such successes elsewhere in the world, it would take 10 to 20 years. Nevertheless, diversification is an issue but one that mustn't necessarily mean retreating from China, but rather diversifying within China. 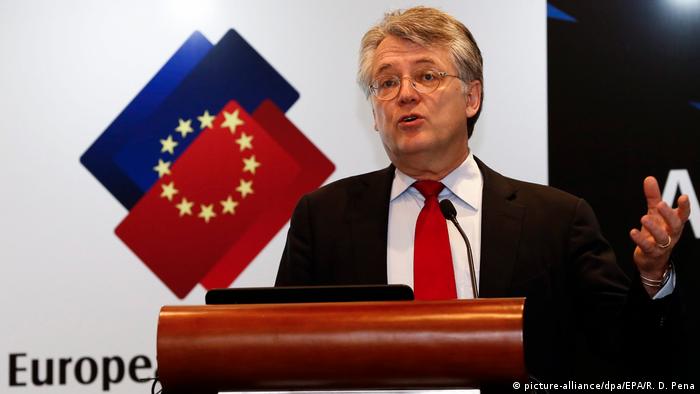 Jörg Wuttke notes there will be some changes in global supply chain strategies, but no big nation or trade bloc can afford to ignore China

Another new trend emerging is that corporations are beginning to look beyond China's borders in efforts to find other attractive locations elsewhere in the world. So, we don't see corporate relocations away from China in the current crisis, but stronger efforts to diversify production.

Companies with a strong presence in China are glad to be there. Others that aren't may no longer want to wait and see if China opens up its markets. And all of them are demanding bolder reforms from the Chinese government.

Coming back to the virus crisis — how is China's handling of the pandemic perceived among your members? And what's your opinion of China's response after the virus started to spread globally?

It's becoming a problem that China's image is left hugely tarnished as a result of the outbreak. There have been outbursts of xenophobic violence in the country recently, and also the fact that foreigners were separated from their families has led to tensions.

As a result, a number of European firms are now experiencing difficulties in recruiting specialists willing to work in China. Finding personnel is really a big issue at the moment.

Moreover, it doesn't really help the current situation when a well-founded Chinese patriotism suddenly turns into nationalist and isolationist policies. Back in January, China could have opened up and tell the world that it's got a problem.

But China remained in a state of denial, even though the whole world was willing to support its virus-fighting efforts by sending millions of face masks, and with many foreign companies collecting millions in donations. China could have shown to the world it's a grateful nation, one which is helping others later in the crisis.

But it didn't do so; it was urging us, instead, not to make the international support known to its own population. On the other hand, we were downright flabbergasted when China was launching a massive campaign on the internet about its own deliveries of face masks to other countries.

By keeping foreign assistance on a low key, while making much ado about its own contributions to fighting the virus on the global scale, China has lost quite a lot of its "soft power" leverage in the world.

In the ongoing confrontation between China and the United States, the European Union appears to be sitting on the fence, watching the two superpowers slug it out. Can you imagine a more proactive role for the EU to play in the conflict?

The EU is currently the biggest economic bloc in the world, if you count the UK in for a transitional period. With 500 million consumers and many companies accelerating high-tech developments, our markets set standards for the whole world in many sectors. We are big enough and good enough not to be forced to choose between America and China. We have to mind our own interests.

When it comes to defending the World Trade Organization (WTO) or fighting climate change, we are on China's side. As far as free shipping in the South China Sea or open and fair access to Chinese markets is concerned, we support the US position. We don't have to curry favor with neither of the two.

Jörg Wuttke is the president of the European Chamber of Commerce in China. He's lived in the Asian country for 30 years. The interview was conducted by DW's Yan Jun.