The German city of Erfurt may forever be marked as the site of a school shooting rampage which took the lives of 17 people. But Erfurt has a rich history that it hopes will not be overshadowed by one tragic day. 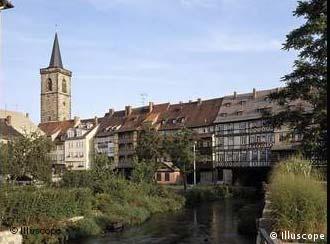 Erfurt, with its 204,000 residents, is the capital of the federal state of Thuringia in what was once East Germany. It's often overshadowed by its next-door neighbor Weimar and that city’s literary giants Goethe and Schiller. But Erfurt can look back on its own impressive history and list of leading personalities. The city was founded back in 742 and grew in the middle ages from a settlement at the intersection of trading routes to a powerful center of industry and the site of an important university. Church reformer Martin Luther once said Erfurt "is situated in the best location. It is the perfect place for a city." Others agreed with him, and the city’s vibrant cultural life and economic might attracted people like Goethe and Schiller, Johann Sebastian Bach, Czar Alexander I. and even Napoleon.

There is hardly any other place in Germany where German and European history are so densely concentrated and easily accessible to visitors.

A firm belief in the progress of socialism and concrete as the most progressive of building materials almost led to the destruction of the medieval center. There were plans to demolish it and make room for a freeway. But the end of German socialism in 1989/90 put a halt to those plans.

Instead of bulldozers, architects, painters, masons, and carpenters came into the city and restored the beauty of the historic buildings around the cathedral. Today, after decades of neglect, Erfurt has one of the best preserved medieval city centers in all of Germany.

In 1500, Erfurt could boast of almost 90 churches, monasteries, chapels and other ecclesiastical foundations, earning it the nickname of the Rome of Thuringia or "erfordia turrita" (tower-crowned Erfurt).

Religious orders from all over the region flocked here to establish monasteries and open schools.

In the 14th century, the city university was founded, the fifth oldest university in German-speaking Europe. It soon began Germany’s largest university and even counted Martin Luther among its students for a while. However, the region’s religious conflicts took their toll and in the 16th century the university lost much of its prestige. It was finally closed in 1816.

The current university is so new you can almost still smell the paint: The three faculties of philosophy, political science and education science were opened in 1999.

Plenty to Do and See

Erfurt is overlooked by the towering spires of St. Mary's Cathedral and the Church of St. Severus. The Krämer Bridge is the only one of its kind in Europe - at 120 metres it is the longest inhabited bridge, complete with 32 houses. Quite close to it is the "Domberg" (cathedral hill), the only extensively preserved baroque fortress in central Europe, where visitors are welcome to explore the maze of passageways in its underground mine. 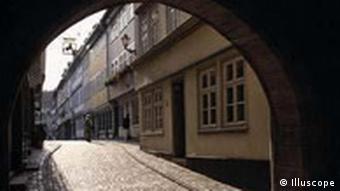 There are events throughout the year ranging from the Bach festival and the 'cathedral steps' festival plays to the Martin's Festival, all of which add to the old-meets-new atmosphere of this provincial capital.

Under Erfurt’s charming facade lies a city that is struggling. Like most other cities in the former East Germany, Erfurt is struggling with economic stagnation and high unemployment—slightly over 18%, far above the German average of 11%.

As elsewhere in the East, many industries were forced to close when capitalism came to town. They were not competitive. And in the first year’s after reunification, the region’s poor infrastructure meant attracting new industry was difficult.

The city is also trying to stem the population drain it experienced in the decade after reunification. Poor employment prospects in the former East have forced many people to look for greener pastures elsewhere, particularly in western Germany. From 1990 to 1998 Erfurt lost 9.7% of its population.

Despite all that, the city has not given up hope. Its new university hopes to draw ever more young people to the region. The city administration is putting increasing emphasis on the tourism sector, and the numbers of people visiting Erfurt are rising. And it is banking on its highly educated work force, low cost of living, developing service sector and high-tech industry to bring it out of the doldrums.

Unfortunately for Erfurt, last Friday’s shootings have given it another hurdle to overcome.

A day after a tragic shooting rampage at a German high school, politicians started with the partisan bickering that has dominated this election year. But they quickly changed their tune (April 30, 2002)

Erfurt – A City in Tears

A memorial service was held on Saturday for the victims of the worst mass murder in Germany's postwar history. 17 people died in a school shooting in the eastern German town of Erfurt on Friday (Arpil 28, 2002)

Görlitz, tucked away in the far eastern corner of Germany, is another example of a historical and architectural treasure struggling to shake off the impact of socialism (Mar 31, 2002).