Erdogan demos and counterprotests put Cologne on edge | Germany | News and in-depth reporting from Berlin and beyond | DW | 31.07.2016

Tens of thousands of people attended a series of rallies in Cologne on Sunday in reaction to the recent coup attempt in Turkey. The main event attracted more than 20,000 Turks living in Germany. Sertan Sanderson reports. 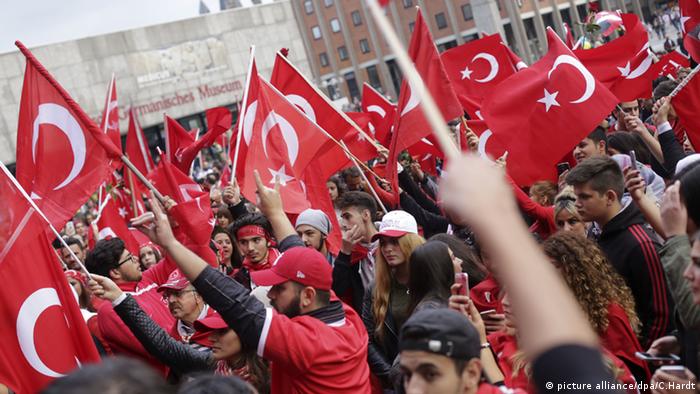 A former shipyard on the Rhine in Cologne was the site of the biggest rally in Germany in response to the failed coup attempt in Turkey earlier in July. Within a matter of hours it turned into a virtual sea of Turkish flags.

There were reportedly more than 20,000 people attending the controversial rally.

Organizers stressed, however, that this was not a demonstration solely in support of Turkish President Recep Tayyip Erdogan, but rather one in support of democracy.

The abundance of images of Erdogan and the Justice and Development Party, which he founded in 2001, made it clear, however, that many of those gathered were there to cheer on the leader. Many protesters expressed disappointment, even indignation, at the fact that the Turkish president was not allowed to speak to the congregated crowd via video link. A court order issued on Saturday had prevented Erdogan from taking part in this way. 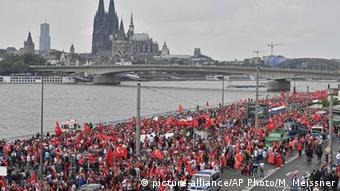 Some put the estimated number of people attending the main rally at as high as 40,000, while others had more conservative estimates

One of those attending the rally, Lütfiye Kum from the town of Krefeld about 50 kilometers (35 miles) north of Cologne, said she felt she had earned the right to see Erdogan at the rally via the video screens. She stressed that millions of Turks had helped rebuild Germany and stressed that she, like all others, loved both countries. Kum called Germany her "second home."

Some of the tens of thousands attending the event stopped for prayer; others professed their faith more loudly, shouting 'Alluha Akbar' during what had been billed as a secular event in support of democracy.

Later, there were even calls for the reintroduction of the death penalty in Turkey following the bloody coup attempt of July 15.

The gathered crowd sang along to the Turkish national anthem when it was played at the start of the events - but not many seemed to be able to recall the lyrics of the German national anthem, which followed immediately thereafter.

Overall the atmosphere remained peaceful and even festive.

Germany is home to about 3 million people of Turkish descent, accounting for the biggest Turkish diaspora. Though Turks may not always be allowed to exercise their freedom of expression in their homeland, Germany has hosted countless protests in support of various Turkish causes over the years.

A series of counterdemonstrations had filled the streets of Cologne during the day. The police said the scene at these smaller rallies had been "tense" at times. The situation almost escalated at the city's main train station, where left-wing and right-wing protesters stood only a few meters apart.

Police had set up barricades to keep the conflicting parties away from each other; however, once the main event was coming to a close, there were brief reports of clashes inside the station as heavy rainfall drove people to seek shelter.

Considering the fact that tens of thousands of people descended on one of Germany's biggest cities, the day's events could have turned sour fast if it hadn't been for the security forces. People had been bussed in from all over Germany, and a bus with a UK license plate and Turkish flags on its windows showed that some had even come from much further afield. 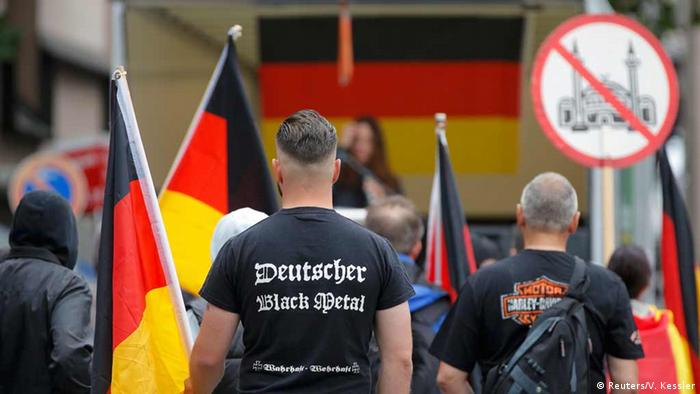 Over the past few months several events in Cologne have polarized public opinion: The city gained infamy the world over when police was unable to prevent thousands of men allegedly of North African origin from attacking and sexually assaulting hundreds of women on New Year's Eve. Just before the mayoral candidate Henriette Reker had been stabbed in the autumn of 2015 for her welcoming policy toward refugees. Reker survived the attack and went on to win the election.

Turkey is still reeling from the failed coup attempt as Erdogan steps up his clampdown on journalists, lawyers, teachers and even the military, saying that the state had been infiltrated by subversive forces on every level.

Erdogan's supporters echoed his sentiments in the streets of Cologne on Sunday, while those who truly oppose him likely opted to stay at home.