1. The stars of classical music — and Bob Dylan?

The Elbphilharmonie's Great Concert Hall is regularly booked out.

Some world-leading orchestras and musicians have made appearances since the 2017 opening — including Berlin's, Vienna's and New York's philharmonic orchestras and Greek-Russian conductor Teodor Currentzis. Celebrated violinist Anne-Sophie Mutter has also played in the hall, as has star conductor and pianist Daniel Barenboim.

Ahead of the fifth anniversary of the "Elphi," artistic director Christoph Lieben-Seutter expressed satisfaction with its track record so far: "We've achieved a lot more than expected," he told press agency KNA.

Alan Gilbert, the 54-year-old chief conductor of the NDR Elbphilharmonie Orchestra, who led the New York Philharmonic from 2009 to 2017, is similarly upbeat about the venue's first five years.

"With the artistic possibilities and the potential with which the Elbphilharmonie inspires broader cultural life, Hamburg has achieved a new status throughout the world," he told German press agency dpa. He added that the city has "perhaps even become the place for classical music."

"We get requests from the very biggest names and legends who would love to perform here," he noted, adding that unfortunately the venue's packed schedule can't accommodate them all. "For example, we can't find a date for Bob Dylan right now," the artistic director said.

The core task of the Elphi was to get more people excited about classical music, and Lieben-Seutter believes this goal "has been absolutely fulfilled."

Before the COVID-related shutdown in March 2020, 2.7 million concertgoers had already experienced nearly 2,500 concerts in the Elbphilharmonie's two halls.

Meanwhile, The Plaza, the viewing platform 37 meters (121 feet) above the ground that can be visited without a concert ticket, is expecting its 15 millionth visitor in March.

For Kent Nagano, principal conductor of the Philharmonic State Orchestra, the Elbphilharmonie is an "absolute success story" — and not only because of its excellent acoustics.

"It's just as important that a concert hall is a meeting place for society," he told the dpa. "And that's what the Elbphilharmonie has achieved. It has helped Hamburg achieve a new cultural identity." 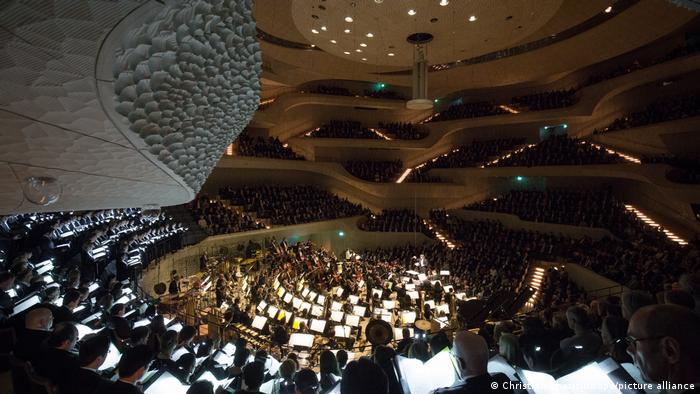 Conductor Kent Nagano, the Philharmoniker Hamburg, and the chorus of the Hamburg State Opera, performed on the opening week in January 2017

3. Community spirit during a pandemic

Due to the coronavirus pandemic, the Elbphilharmonie — like a lot of cultural institutions — had to close its doors to the public in March 2020.

But the cultural landmark found a way to symbolically reopen during the closure: In early September 2021, the Elbphilharmonie was repurposed as a temporary vaccination center.

The building opened its backstage area, which is otherwise inaccessible to the public, and the musicians' stage in the main hall served as a rest room. More than 800 people got their jab there, with a long queue forming outside the venue.
For one day, the Elphi served as a veryexpensively-constructed vaccination center. The building's construction cost €789 million ($895 million) — 77 million was the initially planned price — and it took 10 years to build the hall instead of three. But all the complaints about a "million-dollar grave" have since quietened down. 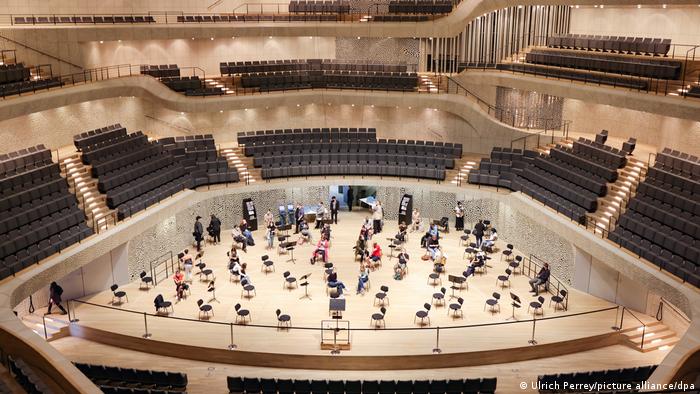 An expensive yet spectacular vaccination center — but just for one day

4. A forum for upcoming talent

The Elbphilharmonie also provides a stage to nurture young artists who are on their way to becoming world stars.

German singer Zoe Wees performed her song "Control" at a concert for schoolchildren in late 2021, and was accompanied by the Bundeswehr Music Corps under the direction of Christoph Scheibling. A native of Hamburg, Wees gained music industry notice via social media and is now getting used to appearing on stage, having performed her single "Girls Like Us" at the American Music Awards in November 2021.

Meanwhile, "Control" has gone gold in several countries, including the US. Her debut album "Golden Wings" was released in May 2021 by the American major label "Capitol Records" — US singer Katy Perry is also on the roster.

'A Celebration of Black Music': a concert with Thomas Hampson

The venue's fifth birthday is being celebrated with both musical and visual programs.

As part of the artwork "Breaking Waves," by the artist collective Drift, hundreds of illuminated drones will bring the facade of the Konzerthaus to life.

The show is choreographed to the second movement of the Piano Concerto by Thomas Adès, which will be performed on January 11, 2022, at the celebratory concert in the Great Hall.

The light installation, however, has been postponed until April due to rising COVID infections. It will instead premiere at the start of the Hamburg 2022 International Music Festival on April 28 and will be shown on three additional evenings thereafter.

Artistic director Lieben-Seutter described the installation as "our birthday present to the people of Hamburg," adding that the postponement "to a warmer time of year also has advantages. So hopefully many more people will be able to participate in the project."

It won't be the first light installation in the Elbphilharmonie's history: On June 22, 2021, it shone in rainbow colors — a silent protest against UEFA's decision not to let the Allianz Arena glow in the rainbow colors of the LGBT movement for the European Championship.

A speech by an exiled Turkish journalist alongside an orchestra of Syrian refugees may sound like a disturbing kind of arts event in Hamburg's iconic concert hall. It was in fact anything but.

Hamburg's iconic concert house opened its doors on January 11, 2017. To mark this anniversary, we've picked out some surprising facts and figures about the futuristic building.

Kent Nagano: A life in music