Climbing COVID numbers have forced the return of the hard lockdown in Germany. For most of the past year, tens of thousands of freelance musicians have been out of a job. The famed violinist is addressing their plight. 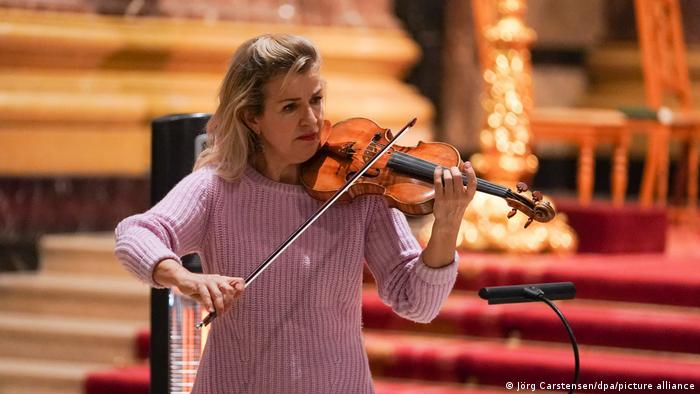 During an event in Hamburg's St. Michael's Church this weekend, Anne-Sophie Mutter performed — and called for donations. The recipients: the roughly 55,000 independent, freelance musicians in Germany who figuratively or literally "sing for their supper." Unaffiliated with orchestras or other institutions, if they don't play, they don't earn. The general music director and principal conductor of Hamburg's state opera, Kent Nagano, also participated in the event.

While the German federal government has made financial assistance to these people available, it's been "too little, too late," Mutter said, citing letters she has received from family members of musicians who have taken their own lives out of desperation.

Mutter has been a bitter and articulate critic of governmental restrictions on the arts, and particularly on classical music events. She does not oppose the renewed severe restrictions on nearly all public activity set to go into effect nationwide on Wednesday: "Right now, the completely strict lockdown is the only way to protect people's lives," she told DW in Hamburg.

But Mutter takes the long view: "Afterwards, thought must be invested into how to bring the arts back to everyday life under reasonable and economically feasible safety concepts — of which there are plenty, in other European countries and in Asia, too."

The 57-year-old violinist has not been alone in these efforts. Over the weekend, Pope Francis added his voice to a growing chorus appealing for assistance for artists.

"The world needs beauty if it is not to sink into desperation," he said while meeting musicians on Saturday who were performing in a televised Christmas concert at the Vatican. A pandemic makes it that much more pressing: "Artistic creation can bring forth light, and beauty can create a feeling of hope," the pontiff added. 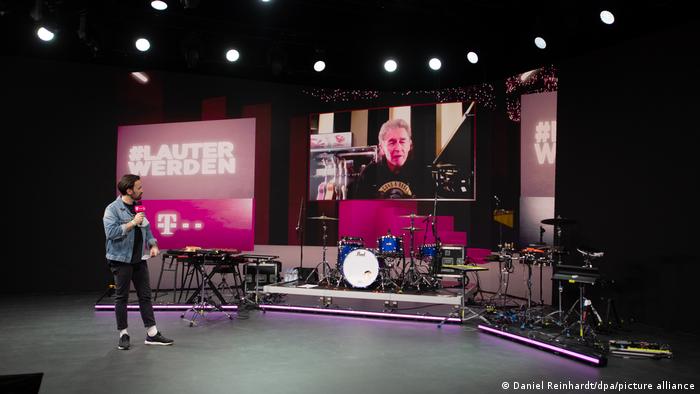 Despite the empty venue seats, the production included an elaborate stage set, pointing to the unsung people who work in events infrastructure, whose livelihoods have become even more imperiled than those of creative artists over the past nine months.

"Without the crews, no concerts, no festivals. And without live music, things grow very quiet. That's why we are calling for donations. We want to give a voice to the people who work behind the scenes. Together we'll get through this difficult time," best-selling musician Maffay said. Telecommunication giant Deutsche Telekom contributed €250,000 ($304,000) in advance to the effort.

Mutter, who has performed this year in churches in Berlin, Munich, Stuttgart, Berlin, Hamburg and other cities, describes performing, for herself personally, as "a sort of religious service" while emphasizing the inclusive nature of her art.

"That's why music is so eminently important in our society, because it is the only cohesive thing that unites us regardless of our cultural roots or religious creed. It is an embrace we urgently need, one that is absolutely antiviral," she said. Mutter has been joined by present and past members of her foundation, including those pictured here: Wei Lu, Lionel Martin und Hwayoon Lee

A practical aspect in her and other artists' choice of churches as a pandemic performance venue is that there is a lack of alternatives. Church services have been allowed to go ahead; many arts gatherings have not.

This is something Mutter has little understanding for. "To me, it's a disastrous for the state to define religion as more important than arts activities. You can't play one off against the other," she said.

Mutter is critical of what she sees as false priorities. "For the entire cultural industry to be tossed aside along with the bordellos and the nail studios, all categorized together as dispensable leisure activities, is wrong and deeply insulting. Are we a nation of culture, or are we not?" she said.

Simply appearing in churches during Germany's recent "light lockdown" has been a pointed statement in itself. "We otherwise have no forum for this, apart from the street," she added.

While accompanying church services, renowned classical musicians have also been issuing a plea to churches to join the effort. "I think there's a certain meaningfulness to accompany these hours of prayer in churches and synagogues and to combine them with a plea for donations," said Mutter.

However, even these modest activities will be put on hold for at least a month, depending on the success or non-success of Germany's stricter lockdown, which goes into effect on Wednesday.

But Mutter is already focused on the aftermath, citing a number of studies indicating that if hygienic standards are maintained, arts gatherings are not so-called superspreader events. "These studies have to reach politicians so that a solution can be found that lies somewhere between the off and on switch," said Mutter.

One of the world's most celebrated violinists, Anne-Sophie Mutter is among the five prizewinners of the prestigious Japanese award that has been called the Nobel Prize for the arts.

Link to the #lauterwerden festival