The Cairo Declaration calls for a ceasefire starting on Monday and the departure of foreign militias from the war-ravaged country. The plan has the backing of Libyan National Army head Khalifa Haftar. 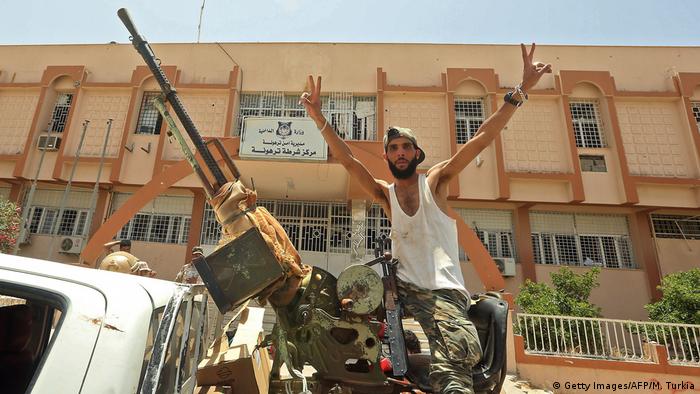 Egypt on Saturday unveiled a plan to end the years-long civil war in Libya, in an initiative accepted by the commander of the Libyan eastern forces that have suffered heavy losses in recent weeks.

Egyptian President Abdel-Fattah al-Sissi announced the plan in Cairo, alongside Khalifa Haftar, the head of the Libyan National Army (LNA) and Agila Saleh, the chief of Libya's allied elected parliament.

However, no representatives of the Government of National Accord (GNA) — which the United Nations recognizes as the legitimate Libyan government — or its allies, were present at the conference.

El-Sissi told a news conference that the proposed plan, which he called the "Cairo Declaration" includes a ceasefire starting on Monday and the departure of foreign militias from Libya. Thousands of mercenaries, mostly from Syria, have been fighting on both sides of the war.

El-Sissi added that the plan also aims to pave the way for elections in the North African country and that it would encourage a "return of normal life" in Libya and also warned against continuing to look for a military solution to the conflict.

"There can be no stability in Libya unless peaceful means to the crisis are found that include the unity and integrity of the national institutions," the president said."We warn against the insistence of any party on continuing to search for a military solution to the crisis in Libya."

El-Sissi also called on the UN to relaunch peace talks in Geneva, to be attended by the warring sides as well as the European Union, the African Union, the Arab League and Libya's neighbors.

The plan, he said, also conforms to UN resolutions on the war and international efforts to end the conflict, including a summit held in Berlin in January.

The initiative also proposes an equal representation of Libya's three regions at a presidential council to be elected under UN supervision. The council would then take power for a year and a half, according to Saleh.

The UN-supported GNA offered no immediate comment on the plan, but a spokesman said they would continue fighting to capture Sirte, a city east of Tripoli, which Haftar's forces took over in January.

The Libyan civil war has drawn the resources of outside governments and weapons, with Haftar supported by Egypt, Russia and the United Arab Emirates.

Haftar's LNA has recently suffered significant military setbacks at the hands of the GNA, which is allied with Turkey and Qatar — Egypt's regional rivals.

In recent weeks, Haftar's forces almost lost all of the territory that they had gained since the beginning of the Tripoli offensive after Turkey extended more support to militias allied with the GNA.

Earlier this week, government forces regained control of Tripoli's border, tackling a months-long campaign by Haftar to seize the city from the GNA.

Libya has been in turmoil since 2011, when then-leader Moammar Gadhafi was ousted and later killed. The country has been split between rival governments in the east and the west, both of which are backed by armed groups and foreign governments.

Forces loyal to the UN-backed government have scored a series of victories against Libyan warlord Khalifa Haftar with the help of Turkish drones. UN officials said warring parties have now agreed to ceasefire talks. (04.06.2020)