Reporter Julieth Gonzalez Theran was sexually harassed while broadcasting live from the World Cup in Russia. Bundesliga referee Bibiana Steinhaus has described the incident as "unacceptable." 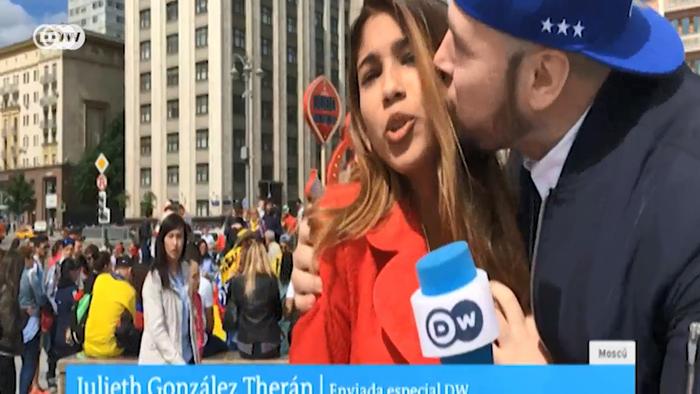 It happened at lightning speed. Correspondent Julieth Gonzalez Theran was reporting live from Moscow for DW's Spanish news channel when a man appeared out of nowhere, grabbed her breast and kissed her on the cheek.

After a brief moment of shock, she continued talking into the camera, while the man disappeared back into the crowd.

"I had been at the scene for two hours to prepare for the broadcast and there had been no interruptions," Gonzalez Theran said. "When we went live, this fan took advantage of the situation. But afterwards, when I checked to see if he was still there, he was gone."

Bibiana Steinhaus, Germany's first female Bundesliga referee, is no stranger to such behavior. She told DW: "I feel for her, because this type of attack has happened several times in the past. Don't kid yourself that similar misogynist things do not happen."

TV reporters are always aware that their live broadcasts may be interrupted, especially by fans during major sporting events such as the World Cup. International news channels such as Deutsche Welle train their teams for such situations. Indeed, ahead of the World Cup, the broadcaster warned its reporters about the possible dangers they may face in Russia.

"Lots of people think that the reporter is only there to bring some color to the picture. But we want to talk about systems and strategy," she said.

Mexican reporter Maria Fernanda Mora was also sexually harassed while reporting from a football match in April. She was surrounded and groped by celebrating fans during a live broadcast for the TV station Fox Sports.

She won praise from many fans online after they watched the video of the incident. Like a true professional, she finishes her report. But once she is off-air, she turns around and defends herself with her microphone.

In Gonzalez Theran's case, however, the social media response has been mixed. Some commenters on DW Espanol's Facebook page described what happened as trivial.

"A simple kiss on the cheek and they're acting as if she was dealing with a rapist," is how one person reacted.

Gonzalez Theran is quite reflective about what happened: "For me it is an isolated incident. There are always fans that compliment you and behave respectfully. This one went too far."

What matters to her is that lessons are learned: "We must clearly deal with this problem."

The German Theater and Orchestra Association has released a code of conduct that aims to prevent sexual harassment and abuses of power. DW got in touch with the association's president, Ulrich Khuonm, to discuss it. (14.06.2018)

With men dominating Japanese society, politics, the media and upper echelons of the business world, women have been reluctant to break social norms to reveal instances of sexual harassment. But that may soon change. (08.03.2018)

A group of Chinese feminists are fighting back on social networks against widespread sexual harassment at universities. But the fight has been tough as they face censorship and government crackdowns. (07.03.2018)

Britain's Presidents Club charity has shut down following allegations of sexual harassment at a men-only gala. Foreign Secretary Boris Johnson and the Bank of England were among those forced to clarify their involvement. (25.01.2018)

DW has been put on a list of "foreign agents" in Russia, which includes a number of foreign media operations as well as NGOs that receive funding from abroad.

On the track, Sebastian Vettel continues to trail the pack. However, when it comes to issues like environmental protection, sexism or racism, the former F1 champion is making his voice heard — not to everyone's liking.