Deutsche Welle TV reporter Jaafar Abdul Karim was attacked at a rally organized by PEGIDA activists. Some 15,000 members of the anti-Islamization group had gathered in Dresden to protest Germany's refugee policy. 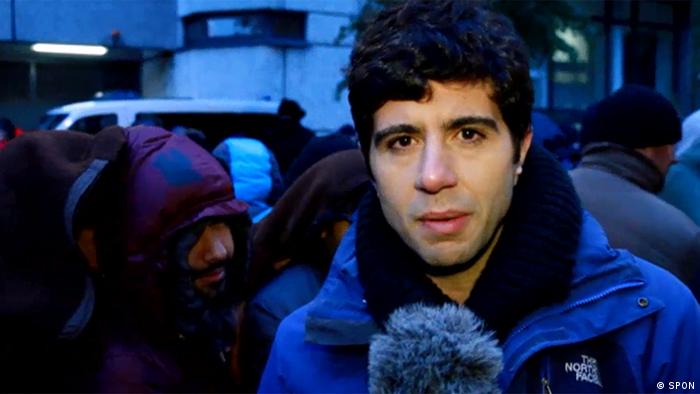 DW journalist Jaafar Abdul Karim said he was disturbed and shocked by his experience while covering the PEGIDA's "anniversary" rally in Germany's eastern town, Dresden, on Monday.

"We wanted interviews and we were somewhere in the crowd," Jaafar said. "We asked why they were here and what they were afraid of. Suddenly, several people surrounded us and started shouting 'Go away, lying journalists. What do you want?'," he added.

The journalist, from DW's Arab Service, said he and his colleague filming the rally wanted to get to safety, but some demonstrators began pushing them. A protester hit Jaafar at the back of his head. "At that moment, we were powerless. We were looking for a way out. No violence, we want to only ask questions," Jaafar told DW television.

The journalist and his companion left the scene as fast as they could and looked for the police.

On Monday, around 15,000 PEGIDA members in Dresden protested against Merkel's refugee laws. The media reported the city as being divided, with nearly the same number of anti-PEGIDA demonstrators making their appearance on the eastern German city's streets.

Members of the PEGIDA, which loosely translates as Patriotic Europeans against the Islamization of the West, began protesting against what they perceived as an increased number of Muslim migrants in the country. This year, they also targeted Chancellor Angela Merkel and her pro-refugee policies.

German Chancellor Angela Merkel has a plan to integrate refugees into German society, but no one knows what it is. Our columnist Jaafar Abdul Karim has a suggestion. (19.10.2015)