Thousands flocked to Dresden to mark PEGIDA's first anniversary on Monday. Fears over skyrocketing refugee numbers breathed new life into the far-right movement in September, paving the way for an emotional rally. 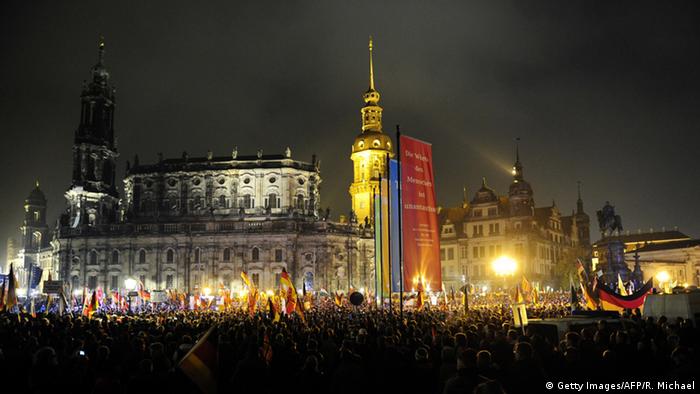 The plaza in front of Dresden's opera house filled gradually with men and women, many of them middle-aged.

Men with flags - some representing German regions, others bearing nationalistic symbols - flocked toward the stage.

"We worked for 45 years and are having our legs pulled with a small pension and now - with these refugees - they're getting it handed to them on a silver platter," said one Dresdner, well into her 70s. Her two girlfriends, each carrying a small German flag, nodded their curly grey heads and gazed into the crowd they've joined every Monday for the past year.

A man in his 30s carrying a Confederate flag, a well-known symbol of racism in the US, offered a different reason for supporting the anti-migrant PEGIDA movement. "To think regionally, to act regionally and by doing so, preserving our diversity and traditions. We have to get away from Brussels' dictation and this increasing centralization that threatens to make everything into a monoculture," he told DW.

Within the hour, somewhere between 15,000 and 20,000 people gathered to commiserate over similar concerns and to validate their fears of refugees, or of Islam, or of politicians ("the people at the top") or of the press ("the media of lies").

What at least these two individuals were not concerned with was the warning of Germany's justice minister, Heiko Maas. Anyone who supports PEGIDA in the wake of numerous attacks by right-wing extremists on refugees and the assassination attempt on mayoral-candidate Henriette Reker on Saturday is now jointly responsible for that violence, he said ahead of the anniversary rally.

Maas, they said, was "part of the system" and "just afraid of losing his position."

Battle cry of the opposition

As PEGIDA founder Lutz Bachmann took to the stage, thousands of protesters crossed the Elbe River into Dresden's old city, coming up behind a line of TV news vans and police cars. Police in black riot gear sprinted across the gap still remaining between anti-PEGIDA demonstrators and right-wing extremists.

"Nazis out! Nazis out!" chanted the protesters. In response, a firecracker sailed through the air and exploded as it hit the pavement near protesters carrying signs calling for peace and love.

"Stop the violence!" someone with a loudspeaker cried out. 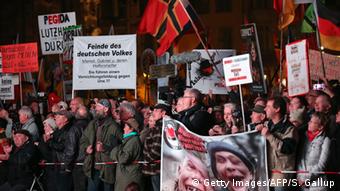 Demonstrators gathered, a year on, with their campaign reinvigorated by the migrant crisis

Lines of riot police secured the area, blocking off every avenue to or from the PEGIDA rally, questioning each person who tried to enter or leave. Police presence was noticeable on Monday evening, with up to 2,000 police officers out on the streets.

In the fall of 2014, "Islamic State" (IS) militants launched an offensive on the Turkish-Syrian border town of Kobani, home to a majority Kurdish population. Thousands of miles away in Germany, Kurds and Yazidis took the streets in a bid to gain support for a German military intervention against IS in Syria and Iraq. The demonstrations turned violent, drawing out Salafist counterdemonstrations.

These events, in turn, spawned the anti-migrant PEGIDA movement, or the Patriotic Europeans Against the Islamization of the West, with its supporters increasingly angered by Germany's welcoming policies toward hundreds of thousands of mainly Muslim refugees.

Lutz Bachmann and five friends advertised their first "evening stroll" through Dresden for October 20, 2014. What began as a gathering of roughly 350 people drew 10,000 by early December and 25,000 by January. The presence of right-wing extremists among crowds of what appeared to be average, middle-class citizens sent shockwaves through Germany.

Although outnumbered, the loudest voices on Monday night were the counterdemonstrators. As Bachmann told supporters that "Dresden is the center of resistance," the crowd responds "Resistance! Resistance!"

But these shouts dwindled down to a murmur as one speaker after another took the stage. Meanwhile, the shouts and whistling of the counter-rallies could be heard continuously as the night went on.

'Not daily life' in Dresden

In the run-up to Monday's highly anticipated demonstration, Dresden Mayor Dirk Hilbert issued a statement against racism, hatred and violence. He also launched an anti-PEGIDA campaign on Facebook. 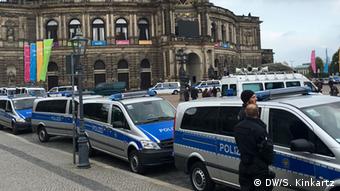 Meanwhile, the group Nazi Free Dresden, in coordination with other groups, drew an estimated 13,000 people to the eastern German city to stand up against the grassroots movement led by right-wing extremists. Emotions are running high.

A couple from New Zealand leaving one demonstration area told DW that they couldn't quite tell which rally they had been in. They were curious to see what was going on, but weren't aware of the significance of October 19. Whoever the protesters had been, they looked "menacing" and "ready for trouble," they said.

A young woman in her 20s at the edge of the rally - PEGIDA in the center, a line of police and anti-PEGIDA on the sidelines - said the past year hasn't been as drastic a change in Dresden as portrayed in the media.

"It's reduced down to left and right, just this left-right debate," she said, her friend nodding. They've both shown up numerous times over the past year to send a signal against a movement that has grown so rapidly and has damaged the city's image, with tourism falling by 2 percent. However, it's easy to forget - on this particular Monday - that what's playing out on the streets looks worse than on a normal day.

"You don't notice it in daily life," the young woman added.