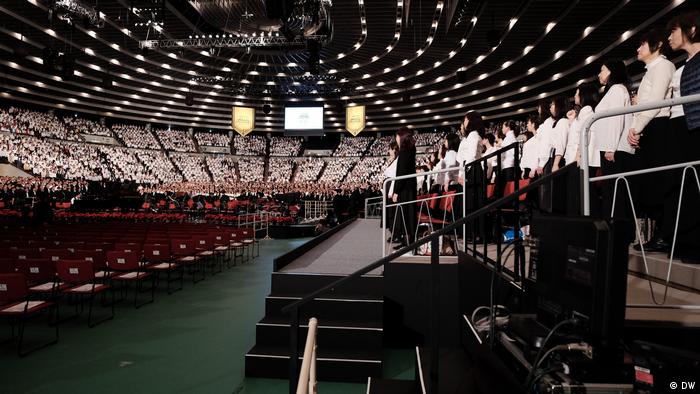 The upcoming DW documentary Beethoven's Ninth: Symphony for the World, not only shows Currentzis and his musicians at work; in it, the conductor reveals how he sees Beethoven's Ninth as the greatest symphony of all time: "If someone were to come from another planet and ask, 'What makes human civilization so special?' Then the best answer would be to play the Ninth Symphony, which is a testament to human civilization," Currentzis says.

The 90-minute DW documentary focusing on Beethoven's Ninth Symphony, directed by Christian Berger, was screened on Wednesday during a press presentation. The film will air on DW TV on December 17, the official start date of the Beethoven Anniversary Year — a 12-month Germany-wide collection of concerts, projects, initiatives and more dedicated to remembering and rediscovering the composer. An overview of Deutsche Welle's plans for the Beethoven Anniversary Year in 2020 was also provided at the press event.

"Beethoven is one of the best-known Germans ever, and stands for the best of Europe, not only with his music, but also with the values ​​he represents," said Rolf Rische, head of DW's Culture and Lifestyle department.

Beethoven's Ninth Symphony is about joy and freedom, and people coming together. "Be embraced" is one of the central phrases in German poet Friedrich Schiller's "Ode to Joy," which Beethoven used as the lyrics for the last movement of his Ninth.

"Be embraced" is also the motto of next year's Bonn Beethovenfest. Typically an annual festival, it will be celebrated twice in 2020, in the spring and the fall. DW is a shareholder and media partner of the music festival.

"Beethoven is a serious composer, who can't be degraded. It is a challenge for us to keep representing his spirit today without undermining his high standards," Beethovenfest Director Nike Wagner said at the press conference. 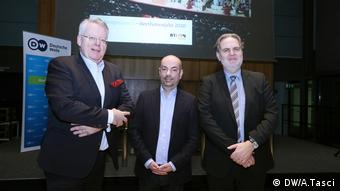 Among the festival program highlights is the Ninth Symphony conducted by Currentzis on March 17. Over the year 2020, Currentzis and his orchestra will perform all nine symphonies in Bonn and Vienna. Beethoven spent the first 22 years of his life in Bonn before moving to Vienna, where he died on December 14, 1827, and both cities will be celebrating the anniversary year with major events.

The fascination of a great composer

"The Ninth Symphony is very famous, but even for people who know it very well, there are still unexplored aspects," Currentzis points out in the documentary. The thought echos the aims of the Beethoven Anniversary Society, the organization that developed the headline BTVHN2020 logo and is coordinating and supporting over 300 projects related to the famous composer. The anniversary year will feature around 1,000 events, and the DW movie focusing on the Ninth Symphony and how it moves people around the world is one of them.

Another DW project is the documentary A World without Beethoven?, in which Berlin Philharmonic Orchestra horn player and DW presenter Sarah Willis demonstrates how relevant Beethoven remains to this day, with lasting influence on the music of our time.

A third major DW film project focuses on Beethoven's Sixth Symphony, the "Pastoral." It is part of the international "Pastoral Project" of the Beethoven Anniversary Society. The project creates an international network of musicians and artists, through which they can share their experience of nature and express it in new compositions. Premiering on June 5, World Environment Day, the DW documentary will present five participants of the Pastoral Project.

DW's culture TV program Arts.21 will also feature short documentaries related to Beethoven's influence today, including one on Currentzis and another on Chinese composer Tan Dun. Both are also two of the central protagonists in the longer documentary Beethoven's Ninth: Symphony for the World. The Oscar-winning Chinese composer and conductor Dun is currently working in Shanghai on a new piece inspired by Beethoven's Ninth Symphony. Entitled "The Nine," it will premiere at the Bonn Beethovenfest on August 8 as part of DW's Campus Project and will be released in audio form through DW's Concert Hour radio series.

For 20 years, the Beethoven Campus Project has been promoting new musical talents by creating exchanges between young musicians from Germany and their colleagues from other parts of the world, allowing them to expand their horizons and compare musical techniques, listening habits and approaches.

Through online and TV reports, as well as through various social media platforms, DW will also be covering the events of the anniversary year's opening weekend on December 17, when Beethoven's birth museum, the Beethovenhaus, will reopen after restoration and the exhibition "Beethoven: World.Citizen.Music," will open at the Bundeskunsthalle Bonn museum.

Just months ahead of celebrations next year honoring the 250th birthday of Ludwig van Beethoven, the city of Bonn unveils a new multi-media tour dedicated to its most famous son. (11.10.2019)

Known internationally through his New Skool Orchestra, the young South African composer feels a responsibility to tell the stories of today, as he reveals in conversation with DW. (10.09.2019)