Just months ahead of celebrations next year honoring the 250th birthday of Ludwig van Beethoven, the city of Bonn unveils a new multi-media tour dedicated to its most famous son.

Today, a large department store dominates the corner of Münsterplatz Square and Remigius Street in downtown Bonn — a scene that would have looked quite different in the 18th century, when the area close to the town walls was dotted with tasteful townhouses surrounded by lush gardens. Presumably, that would still be the scene today if Allied bombs hadn't devastated Bonn in WWII.

Back in 1788, court counseler Emanuel Joseph von Breuning's widow Helene and the couple's four children lived in a three-storey Classicist building in the heart of Bonn, surrounded by a wealth of musical instruments, books, bird cages and children's toys. The husband had died in a fire in 1777.

On October 31, a young man named Ludwig van Beethoven, just 18 years old, came to the house to give the children Lorenz and Leonore von Breuning piano lessons. The family warmly welcomed the "often stubborn," often unkempt and often hungry young man into their midst and gave him the feeling of security he so sorely missed. For the next few years, the "Breuningsche Haus" became Beethoven's second home. He stopped by on an alomst daily basis and spent his last day in Bonn with the family before departing for Vienna on November 1, 1792. 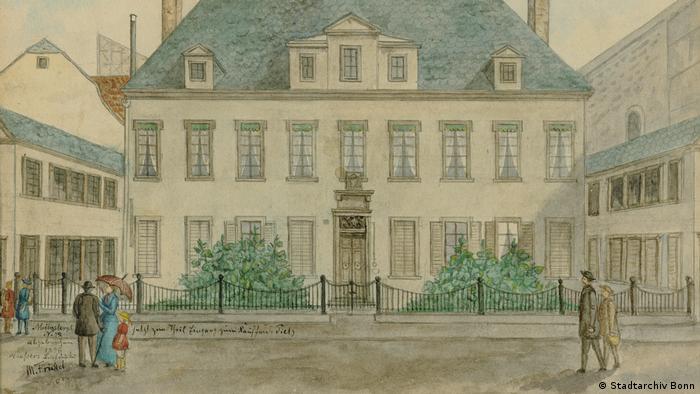 The stately home of the Breuning family

Visitors can listen to stories like this at 22 grey information columns — Ludwig van Beethoven spent an equal number of years in his home town — unveiled this month, the first visible harbingers of the upcoming Beethoven anniversary year in and around Bonn. The BTHVN STORY inner-city route with its eleven columns guides Beethoven lovers, via their smartphones, through the composer's immediate environment in Bonn in text, image and sound. An additional 11 stations in the immediate region offer additional Beethoven facts and trivia in places he also visited.  All it takes is a scan of the QR code, and a story unfolds. 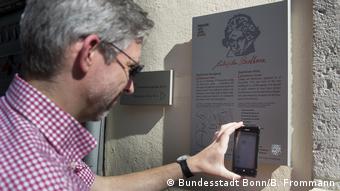 Scanning a QR code at the house where Beethoven was born

The city route gives visitors a good idea of where young Beethoven would go on a daily basis: from home to his job at the electoral court, a walk along the river to get to his piano students' homes, perhaps a quick detour to a pub. Some historical places have been preserved and look like they might have in his time. "A place that still looks exactly the same today as it did in the 18th century, even though it has of course been restored, is the Schlosskirche," says Ralf Birkner, managing director of the Beethoven Jubilee Company. Another important site is St. Remigius' church, which houses Ludwig van Beethoven's baptismal font. "The font is the original," says Birkner, "and in the past, it wasn't part of the regular Bonn tourist tour because the church is off the beaten track." 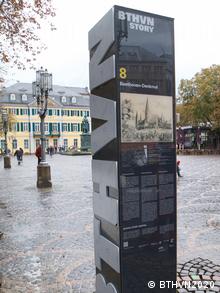 Text, pictures — and a QR code for more information

Other highlights on the Bonn Beethoven route include the Beethoven statue of 1845, inaugurated 53 years after Beethoven's departure from Bonn and 18 years after his death, the old cemetery with the graves of Beethoven's mother Mary Magdalene as well as those of Clara and Robert Schumann, and the quaint Redoute palace in the Bonn suburb of Bad Godesberg. Legend has it that the 21-year-old Beethoven played there for Joseph Haydn, who happened to be passing through and encouraged the young pianist to continue studying music. Beethoven later studied under Haydn in Vienna.

The Beethoven route also takes visitors to places Beethoven frequented and that no longer exist. "The rediscovery of the Zehrgarten inn on the market square is particularly important to me," says Birkner. "It was an inspiration for Beethoven, an inn where freethinkers, court musicians and students met." The young man was presumably also interested in the innkeeper's daughter Babette, considered a great beauty.

Take a walk with Beethoven

On the tours through present-day Bonn, visitors may have to use their imagination to get a feel for the young composer, but the tours outside of the city quickly allow people to become one with Beethoven in nature. "When you go beyond Bonn, you meet Beethoven at every turn," Birkner marvels. 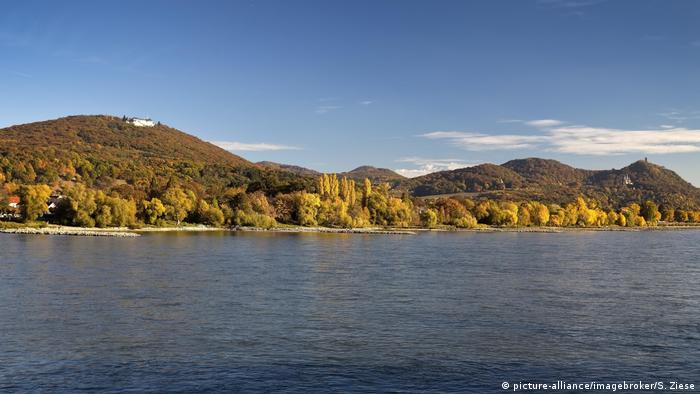 The route takes visitors to castles where Beethoven taught the piano to the nobility, and to his favorite hiking destinations, including monasteries and spas; visitors can also trace the great composer's steps by simply strolling along the River Rhine or taking a hike in the Siebengebirge mountains where Beethoven used to go for walks with his father. The spirit of the composer of the Pastoral Symphony lives and breathes in the charming, powerful nature of the Rhine Valley.