Due to increasing pressure from right-wing fundamentalists, the owner of a hotel in eastern Germany has closed his doors to refugees. Hotel Prinz Eugen had been set to receive nearly 100 asylum seekers. 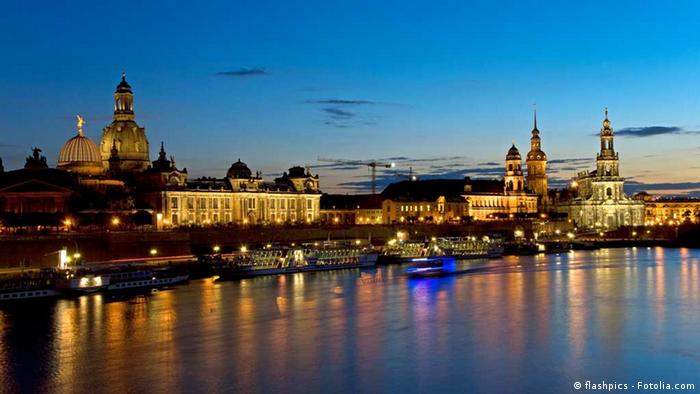 Due to increasing "massive pressure from residents," the owner of a hotel in the eastern German city of Dresden closed its doors to asylum seekers, German media reported on Wednesday.

Hotel Prinz Eugen was supposed to accept up to 94 asylum seekers to help the city accommodate its 2,093 refugees. The owner of the hotel, however, changed his mind, citing threats from right-wing extremists he received on social media platforms and anti-refugee graffiti sprayed on the outside of his hotel.

His about-face is expected to pose a problem for the city, which is expected to receive nearly 2,000 more refugees this year. Martin Seidel, the city's mayor for social affairs, told the German magazine Spiegel Online: "This retreat will create a difficult situation for us. There are no short-term solutions that could be implemented."

According to Spiegel, there was a petition to stop the allocation of space in the hotel for refugees and it had 5,700 signatories. It listed six "formal concerns" along with four "political and geopolitical concerns" and seven "contextual concerns." One of these concerns was that the location of the hotel in Leuben/Laubegast was a "political risk area," with the city's second largest number of far-right NPD voters. The petition said it was thus "predestined for conflict." 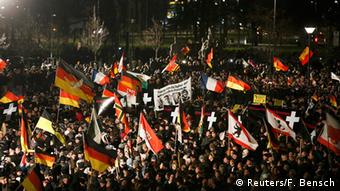 Dresden has seen the highest turnout for PEGIDA demonstrations

Germany has been witnessing a movement gaining in momentum: "anti-Islamization" protests organized by the "Patriots against the Islamization of the West," or PEGIDA for short. The group proclaims to be against fundamentalist Islamists and the spread of jihad recruitment propaganda since the rather sudden rise of the "Islamic State" (IS) over the summer, which now controls vast swathes of Iraq and Syria and has succeeded in recruiting hundreds, if not thousands, of young Muslims in Europe to wage jihad in their caliphate. Critics, however, believe the movement is being used to fuel hatred against Muslims in Germany and have dubbed the group anti-Islam and xenophobic.

While participants of PEGIDA demonstrations across Germany have grown in numbers, counter-movement demonstrations are considerably larger, except in Dresden, the PEGIDA hotspot.

Since an attack in Paris last week that lasted for three days and primarily targeted the satire magazine Charlie Hebdo and its editorial staff, European leaders have voiced concern over the bloodbath's potential to spurn anti-Islam and xenophobic sentiment in Europe.

A solemn demonstration was held in Berlin on Tuesday to promote tolerance and religious freedom in the wake of last week's terrorist attacks in the French capital which left 17 people dead. Holding signs that say "Yes to tolerance" and "Je suis Charlie" complete with crescents, crosses, and Stars of David, a crowd of 14,000 gathered in front of the Brandenburg Gate.

German President Joachim Gauck said "we are all Germany" and said the practices of Islamic State and the young men from Germany who join them were a "perversion of religion."

Berlin Mayor Michael Müller called on Berliners to reject Islamophobia, a reference to the PEGIDA anti-Islamization marches that have popped up across Germany in recent weeks, especially in Dresden.

'Xenophobia has no place in Germany'

The annual German Islam conference also took place on Tuesday in the German capital. Chancellor Angela Merkel said that "xenophobia, racism, and extremism have no place in this country," and German Interior Minister Thomas de Maiziere called on the country's Muslims to help fight extremism as well.